For the records: How to tastefully store your vinyl LPs

I began collecting vinyl records as a kid more than three decades ago. This was a few years before the mass production of CDs when the options for music were vinyl, cassettes, and maybe 8-tracks, which were dying out. There was nothing like buying a new LP (I was never much of a singles collector), slicing the shrink-wrap with my thumbnail, and catching a whiff of the new vinyl and cardboard. And they were so beautiful, the way the grooves on the black disc caught the light. I loved the cover art, the lyric sheets, and the liner notes. My vinyl junkie-dom was set right then  and there.

I have 1,500 LPs (and counting), which by serious collector standards is probably a modest number, but still amounts to a sizable chunk of space—not to mention weight (about 475 pounds, give or take).

Strictly speaking, I do not own every record I’ve ever bought (though I still have those Beatles records I bought when I was 10). Some I have traded for others, some I loaned out and never got back (still trying to figure out who has my copy of The Replacements’ Sorry Ma, Forgot to Take Out the Trash), some I even reacquired. Like Daniel Stern’s record collecting character in Diner, I can look at one of my albums and recall what was going on in my life when I got it. They represent an ever-evolving cross section of my listening interests, essential parts of my life.

Few things in recent years have made me happier than the resurgence in vinyl production and consumption, perhaps thanks to a combination of DJ culture, hipster nostalgia for all things analog, and downloadable music’s near death blow to the CD as the popular form of consuming music. This year’s Record Store Day (the third Saturday of April), indie record stores saw a 91 percent weekly jump in vinyl sales, according to a report in the Hollywood Reporter.

Vinyl’s year-round popularity on the local level was confirmed by Malik Miko, a buyer/manager at San Luis Obispo’s own Boo Boo Records, who told me that their album sales—both new and used—have gone up significantly in the past year or so to a mixture of old heads and vinyl newbies.

If you are still reading this, you are probably a vinyl collector of one sort or the other, and whether your collection numbers in the tens or thousands, you face the problem of how to store those stacks o’ wax, and if possible, tastefully so—especially if you live with someone who is not a collector.

Naturally, one’s available living space will dictate the form of record storage. For years, I lived in various studios and apartments in San Francisco, and as my collection grew, I moved from keeping my records in wooden and plastic crates to storing them in sturdy unfinished pine shelves that I bought from a now defunct furniture store. I love them. They have aged well and have a clean, classic look.

When my wife, Erin, and I moved into a house in San Luis Obispo, I needed more record storage. As I was not able to find a local place that had similar shelving, we enlisted a craftsman friend of my in-laws who did a great job of copying the design of the pine cases, and now I have vinyl room to spare (for the time being). For those with the time, know-how, and the money for the materials, the do-it-yourself (or in my instance, the someone-do-it-for-you) route might be the best solution, as you can create permanent, sturdy record storage to fit your available space. 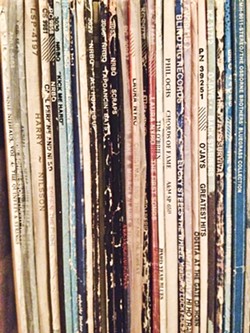 For those with a smaller budget or collection there are several affordable options: Wooden crates of various shapes and sizes can be found online. Some require assembly (Boo Boo sells such in kits in store). More portable, and a favorite of DJs is the plastic crate, such as the Supreme Crate available from the Container Store. A more expensive option offered from that source is the QBO metal storage cube, which comes in a variety of colors.

Less portable but relatively affordable is the Kallax grid-like shelving wooden shelving unit sold at Ikea. So popular are these units that when their predecessor, The Expedit, was replaced by the streamlined and allegedly more eco friendly current model (thinner wood on the outer boards, inner boards with the same dimensions as the old model) there was a panic from customers who worried that the new edition might not be as sturdy. Ikea even released a statement assuring their panicky customers that the new version worked as well as the old. Customer reviews seem to confirm this assertion.

For those with deep pockets and a taste for more unconventional storage there are the Atocha storage cabinets, which are essentially fancy pull-out file drawers for your records. It’s a tidy look, but denies you the pleasure of looking at the spines of your collection, and what’s the fun in that?

While vinyl production and consumption will likely never equal its peak numbers in the 1960s and ’70s, it has without a doubt made a significant comeback. Whether you are just beginning a record collection or buying your 20th Miles Davis and 12th George Jones album (guilty!), there is a wide range of tasteful, creative options out there to store your records. And now you must excuse me, I feel the vinyl fever coming on.

When he’s not crate digging, contributor Ken Samuels can be reached via Arts Editor Jessica Peña at jpena@newtimesslo.com.