For those who are about to rock ...

I need two AC/DC fans, and I need them tomorrow night, Friday, July 20, to go see High Voltage—A Tribute to AC/DC with me. This is not a joke! E-mail me at gstarkey@newtimesslo.com and tell me why you should come, and I’ll pick two people by noon on Friday. Then we’ll meet at SLO Brew at 7 p.m., and the two lucky winners will get in for free and join me in a special VIP booth to kick back and rock out to High Voltage. You can tell me if this AC/DC tribute band delivers the goods! To sweeten the deal, the first round of drinks is on me! Don’t be shy, AC/DC fans! Let’s rock this! 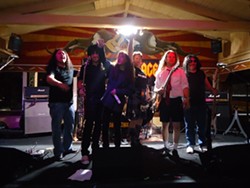 According to their website, “High Voltage—A Tribute to AC/DC hails from San Luis Obispo County in California, and we will travel. We are a professional act in every sense including equipment and sound. High Voltage has gained a reputation as the premier AC/DC tribute act. Our high-energy show is one of a kind. Hire us today!”

They describe themselves thusly: “High Voltage—A Tribute To AC/DC brings to the stage the music, energy, and showmanship of one of the best bands ever, AC/DC! High Voltage uses props, costumes, sound effects, and a set list of all your favorites to provide a stunning visual and audio experience.”

My favorite part of the band’s website is where they list their interests: “Playing AC/DC songs about booze and humping.” 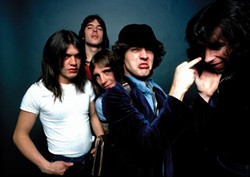 The actual Australian rock act AC/DC formed in 1973 by brothers Malcolm and Angus Young, and over its long and somewhat rocky tenure (their second singer, Bon Scott, died from choking on his own vomit in 1980 after a night of heavy drinking), the band has sold more than 200 million albums worldwide.

Their 1980 album Back in Black sold 49 million units alone, making it the third highest-selling album of all time, behind Pink Floyd’s Dark Side of the Moon and Michael Jackson’s Thriller.

In Australia, the band is colloquially known as “Acca Dacca,” even though they pronounce the letters individually and got their name when the Young brothers saw the initials “AC/DC” on their older sister Margaret’s sewing machine, signifying “alternating current/direct current” electricity.

The real question is whether or not High Voltage lead guitarist Josh Blodgett will moon the audience like real AC/DC guitarist Angus Young is wont to do. By the way, Young’s ubiquitous schoolboy uniform has become such an iconic part of rock legend that it was included in “Rock Style,” a 1999 exhibit at NYC’s Metropolitan Museum of Art.

Okay AC/DC fans, e-mail me a few quick sentences about why you should go to this show with me, and then let’s rock it to “Big Balls,” “You Shook Me All Night Long,” and “Moneytalks.”