Forced from their homes, local organizations band together to provide resources for Grand View tenants

Individuals and families trickle into the community room of Hidden Creek Village apartments on Oct. 9 around 5 p.m.

The Housing Authority San Luis Obispo (HASLO)-owned property in Paso Robles is hosting a meeting that Grand View Apartments tenants' attorney Stephanie Barclay put together to give her clients resources as they prepare to leave the 55-unit complex in November and December.

Days before the event, Barclay—who's SLO Legal Assistance Foundation's legal director—sent a letter to the Paso Robles mayor and City Council on behalf of the Grand View tenants asking the city to help her clients. In a recent ruling on the lawsuit she filed against the apartment complex's owners on behalf of tenants, a SLO County judge is allowing the owners to evict the tenants and close the building rather than bring the complex into code compliance.

Barclay's letter requests that the city: require Grand View's owners to abate the vermin infestation, evaluate eminent domain options, intervene in the lawsuit or file an independent action to ask the court for more time for the tenants, and help tenants find (temporary) housing.

The city hasn't responded to the letter but is working with Barclay to identify ways it can assist in collecting resources for the tenants.

Tenants walk into booths in Hidden Creek's community room, where they can gather information from the Legal Assistance Foundation, Paso Robles Unified School District, HASLO, Peoples' Self-Help Housing, and 5Cities Homeless Coalition. Adults gather around to learn how to get their names on waitlists for future available apartments with affordable housing organizations. Their children stand quietly by them or gravitate toward a table with a spread of sandwiches and chips.

One man asks another if he's found a place to live yet. The other replies softly: He hasn't, but he's been looking every day.

One tenant, who asked New Times not to use her name, spoke in Spanish, saying that in her entire life, she's never had to live in conditions like these.

"I've never seen so much disorganization from the owners, the manager, and the handyman. Not to mention the mistreatment of the tenants," she said.

In July, the tenant walked New Times through her Grand View apartment—the cleanest in the whole complex. It's something she prides herself on. But as much as she tries to keep the apartment spotless, she says she still has a problem with cockroaches, rats, and her bathroom plumbing.

When she tried to leave the complex, she says, the manager told her that she wouldn't get her security deposit back and she would have to pay extra for repairing the apartment once she vacated.

Like many of her neighbors, she was recently given notice to vacate by December. Does she have a place to go yet? She says no.

Paso Robles has a vacancy rate of less than 2 percent, so housing options for the Grand View tenants are slim to none.

During the meeting, many say their current options include temporarily staying at a hotel, sleeping in homeless shelters in surrounding cities, or potentially moving to another city altogether. 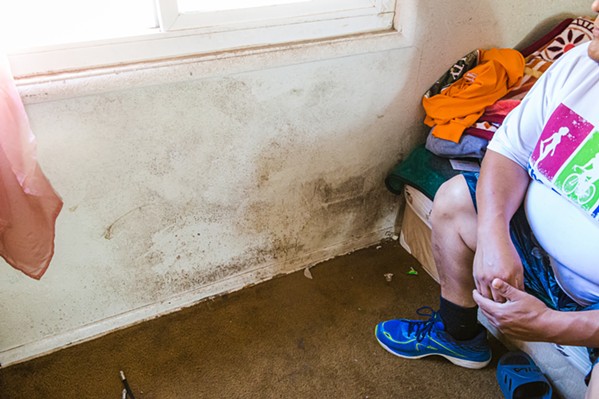 Pam Foster, the student services program assistant for Paso Unified, says the school identified 62 students who live in the Grand View apartment complex and are currently enrolled in the district.

"We're going to reach out to these families and make sure that they are squared away with housing. If they're not we'll do our best to try to help them locate housing with some of the other agencies we work with," Foster says.

The district can also aid students with education advocacy, clothing, hygiene kits, free breakfast and lunch, school supplies, backpacks, and temporary transportation. Some families will have to relocate to other areas, Foster says, and in that case, the district can offer Regional Transit Authority bus passes, depending on where they go in the county, and possibly van transportation.

After the families walk around the booths and ask questions, HASLO begins the meeting by talking about what low-income housing or affordable housing programs the tenants can apply to.

Peoples' Self-Help Housing currently has one vacancy available. The Paso Robles Housing Authority's fourth complex of apartments, Oak Park 4, which is currently under construction, might have 11 units available in December. While there is a waitlist for all of the Oak Park complexes, the owner of Oak Park 4 might be able to accommodate the Grand View tenants temporarily by making them a priority above others already on the waitlist.

Peoples' Self-Help CEO John Fowler tells the crowd that he understands the need for housing but wonders if there's anything else they need assistance with for the time being.

No, the attendees respond, they just need a place to stay. One woman says she has the money and is ready to move anywhere she can.

Frutchey says the city is working on two ways to aid the tenants' situation and deal with the housing shortage in the city. Currently, the city is collaborating with local organizations to ensure that the tenants have a place to live that is safe and clean. But Paso can only "assist the suppliers of housing."

Frutchey suggests that the tenants' attorney compile a database with all of the tenants' information—including income, citizenship status, and the number of people in the family—so housing organizations can see exactly who they're helping and how they can provide assistance.

The second aspect the city is working on, he says, is how it can maintain housing availability and/or create more housing.

"It's just not something you can fix overnight," he says.

Frutchey will be presenting information from the meeting at the Oct. 29 Paso Robles City Council meeting. Δ