On the heels of a SLO County Superior Court judge's ruling to allow the Grand View Apartment owners to go out of business and evict their tenants, the soon-to-be former residents are requesting aid from the city of Paso Robles.

At the Oct. 1 Paso Robles City Council meeting, public comment began with the tenants' attorneys asking the city to help their clients in any way it can. 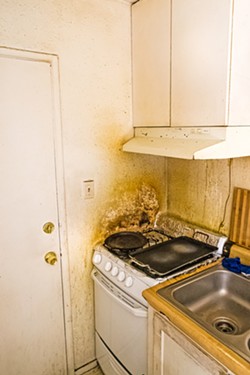 "Your city is facing a humanitarian crisis on its hands caused by some greedy out-of-town landlords who have held Grand View for every dime it was worth while not maintaining the apartments. The crisis is going to fall on your working poor," said Allen Hutkin, co-counsel for the tenants.

"The impact that this causes on the city is going to be significant," he continued, "because when somebody becomes homeless, you're going to see their children start to have truancy problems, crime rates go up, you have increased hospitalization, and you have less productivity because people can no longer work."

The attorneys wanted the City Council to put the issue on its agenda for the next meeting.

The city declined the request, for now, waiting until after a public meeting between local organizations, Peoples' Self-Help Housing and the Housing Authority of San Luis Obispo (HASLO), and the tenants takes place.

The meeting, put together by Assistant City Manager Sarah Johnson-Rios, is slated for Oct. 9 from 5 to 8 p.m. at 80 Cary St. in Paso, a HASLO location.

Grand View is made up of six buildings containing 55 units of one- to three-bedroom apartments, almost all of which are occupied by families—some with small children—and seniors.

In May, a few tenants sought the help of the SLO Legal Assistance Foundation to file a class action complaint against the owners of the complex—Ebrahim and Fahimeh Madadi—for slum conditions. Tenants were granted a temporary restraining order that prevented the landlords from collecting rent, evicting the tenants, or retaliation against the tenants, and for the landlords to begin making the apartments habitable.

In August, the landlords announced a decision to go out of business rather than fix the apartments, and they planned to evict the tenants and sell the property. SLO County Superior Court Judge Ginger Garrett agreed to allow the landlords to follow through with their plan.

"We tried to get as much time for the tenants as possible, but the court ruled that depending on how long the tenants lived there, they have 60 or 90 days to find somewhere else to live," SLO Legal Assistance Foundation legal director Stephanie Barclay said at the Oct. 1 meeting.

Barclay gave the council a glimpse of one family who would be affected by the judge's ruling. She said Beatrice and Raul live in the complex with their three sons: 3-year-old Marcos, 10-year-old Saul, and 11-year-old Pedro.

Marcus has autism, and he lights up when he plays with his toy horses or puts on his cowboy hat and boots. He wants to be a cowboy when he grows up, Barclay said.

The father of these boys has worked at J. Lohr Vineyards and Wines for seven years picking grapes and working on irrigation. The mother works in Paso Robles as well.

"They've been looking for another place to live, but haven't found anything," Barclay said. Δ