Foreigner brings their hits to Vina Robles, but only scalper tickets remain

If you have a hankering to hear these choice gems live, Foreigner: The Hits Tour comes to Vina Robles Amphitheatre on Sunday, June 9 (7 p.m.; all ages; $49.50 to $85 at vinaroblesamphitheatre.com), with Tommy Odetto opening. The band is touring in support of Foreigner 40—Forty Hits From Forty Years (1977-2017), available on Rhino Records. 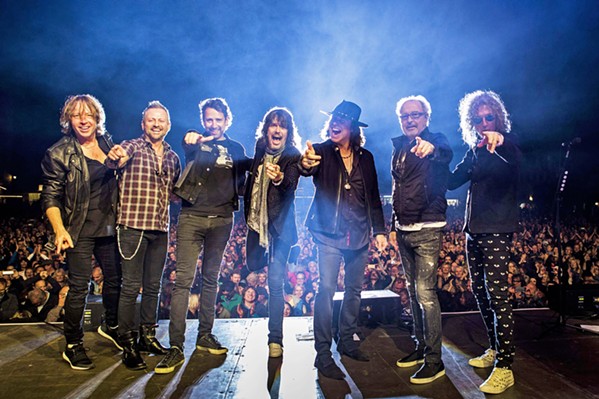 The band has always been Mick Jones' (lead guitar) baby, though the band's first four albums also owe a lot of credit to original members Lou Gramm (vocals) and Al Greenwood (keyboard), who Jones sacked after Foreigner 4 was released in 1981. According to Jones, the two had become increasingly interested in songwriting, and he felt they were taking the band in a different direction.

Even after their departure, Foreigner continued to be huge and remains one of rock's best selling bands of all time, with 80 million albums sold and counting. All told, the group's racked up 10 multi-platinum albums and 16 top-30 hits.

The Forty Hits album "is a comprehensive compilation of original hits and several tracks from the current lineup with Kelly Hansen on vocals, including 'Can't Slow Down,' 'Too Late,' and the Top 20 AC hit 'When It Comes To Love,'" according to press materials. The album also features two new songs, "The Flame Still Burns" and "Give My Life For Love," a brand new song by Jones.

This just in! The concert has sold out. Some tickets are available at third-party vendors. For instance, if you buy a pair of tickets in the floor section close to the stage, they'll set you back $487 each (ticketoffices.com). Is it legal to shoot online scalpers yet?

Numbskull and Good Medicine Presents host Pryor Baird and Kaleb Lee at Presqu'ile Winery this Saturday, June 8 (doors at 6 p.m.; all ages; $20 presale at Boo Boo's and tickeyfly.com or $25 at the door). 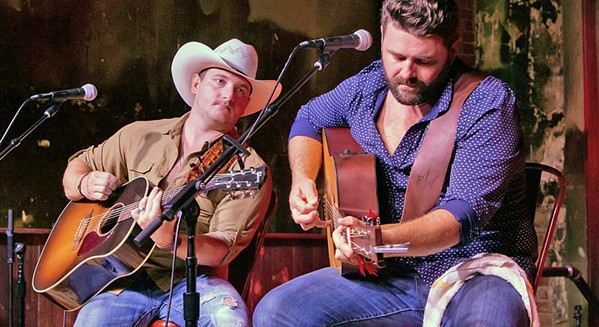 Baird, who originally hails from Orcutt, was a contestant on NBC's The Voice and has since relocated to Nashville. According to his bio, he demonstrates "powerful yet delicate guitar work, [but] nimble fingers aren't his only asset. Pryor is very well known for his burning slide guitar melodies and solid rough vocals."

He'll be joined by another The Voice contestant, Kaleb Lee, who was born in a rural Kentucky town and began "playing country music at a young age. From those Marshall County tobacco fields to the shores of Daytona Beach, Kaleb's passion for music and captivating performances have taken him to stages all over the country," his bio said.

The pair squared off against each other with a duet of Tom Petty's "Don't Do Me Like That" and later performed a duet of Blake Shelton and Trace Adkins' "Hillbilly Bone" in a 2018 semi-final round of The Voice. They found that they sing well together, and now they're playing some dates. 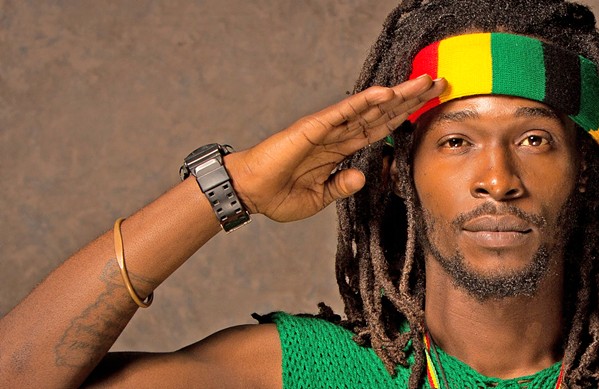 You can also see Jamaican reggae artist Jesse Royal when he plays the SLO Brew Rock Event Center on Friday, June 7 (8 p.m.; 18-and-older; $16 at slobrew.com). This up-and-comer has released seven singles, three mixtapes, one EP, and the 2017 full-length album, Lily of da Valley. 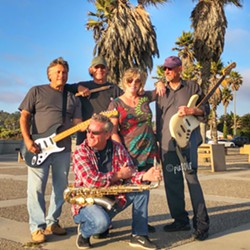 This Tuesday, June 11, Back Bay Betty will play a fundraiser for Morro Bay charitable nonprofit organization Project Surf Camp, which provides surfing and paddleboarding experiences to special needs individuals and their families.

Local rock, blues, soul, and jazz quintet Back Bay Betty mixes classic covers with its own originals to create a super fun dance party. The Tuesday event at Coleman Park on Morro Bay's Embarcadero, called Grapes & Hops by the Rock, will feature a wine and beer tasting. Presale tickets are $25 (at projectsurfcamp.wildapricot.org; 5:30 to 8 p.m.; 21-and-older) or $35 the day of the event.

Last week I told you about the Live Oak Music Festival's opening night on Friday, June 21, which is going to be great with Jimmie Dale Gilmore and Dave Alvin, but the festival's second day, on Saturday, June 22, is going to be off the hook! You can still buy camping passes, but if you only want to go for a day, buy a day pass at liveoakfest.org/day-tickets ($62 presale or $65 at the gate; parking presale $15 or $20 at the gate, free with three or more people in the vehicle). 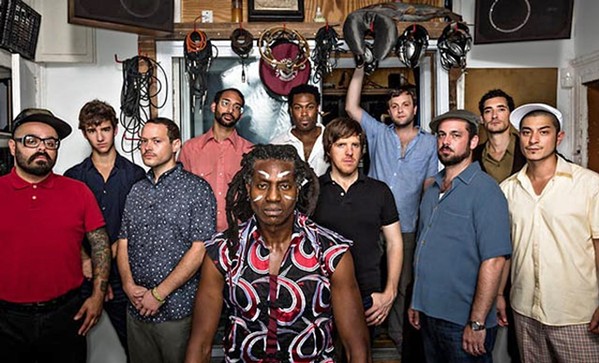 The music starts early with singer-songwriter Derek Senn playing the morning Hot Licks Stage from 8 to 8:45 a.m., followed on the same stage by old-timey string band, the SLO County Stumblers, from 9 to 9:45 a.m.

Inveterate bluegrass scene maker Phil Salazar and the Kin Folk move the music over to the Main Stage from 10 to 11 a.m., followed by the raw blues, folk, and punk of Sunny War from 11:20 a.m. to 12:20 p.m. Hear the harmony vocals and indie folk pop of Shook Twins when they take the Main Stage from 1 to 2:15 p.m., after which the Main Stage closes for siesta time until Soul Scratch returns at 5 p.m.

That 2:15 to 5 p.m. break is filled with a whole lot of other entertainment opportunities. The Something Ridiculous Jugglers will entertain in the Beer Garden, True Zion brings their reggae sounds to Stage Too from 2:45 to 3 p.m. and folk 'n' roll artists The Sam Chase & The Untraditional play Stage Too from 4 to 4:45 p.m. There's also a kids' show with Skeedaddle on the Children's Stage from 3 to 4 p.m.

After blue-eyed soul act Soul Scratch plays from 5 to 6 p.m. on the Main Stage, Cuban big band Orquesta Akokán plays from 6:45 to 8 p.m., followed by Afrobeat headliner Antibalas from 8:45 to 10:15 p.m. During the break from those last two bands, you can scoot over to Stage Too and see alt-rockers Carbon City Lights from 8 to 9:30 p.m.

Still not ready to leave? Don't! Head to the Hot Licks Stage for a late-night dance party with Soul Scratch from 10:30 to midnight. That's a whole lotta entertainment for $62! Next week, I'll tell you about Sunday!

SLOfolks presents Blame Sally in concert this Saturday, June 8 (7 p.m.; all ages; $25 at castorocellars.com/events or at (805) 238-0725). This quartet features Pam Delgado and Jeri Jones, who used to call SLO County home. Along with Monica Pasqual and Renee Harcourt, and now hailing from the Bay Area, this quartet of excellent singers, songwriters, and musicians is impossibly good!

Enjoy an evening of aloha with Kupaoa, the award-winning Hawaiian husband-and-wife duo of Kellen and Lihau Paik, who'll play Orcutt's Unity Chapel of Light Church, on Saturday, June 8 (7 p.m.; all ages; $20 at kupaoa.com or (805) 878-6793 or (805) 363-5863). They're touring in support of their new album, Ka Lei Moana. Also expect Hula performances by Hoapili Pomaika'i Aloha and featuring Kanoe Kahaku of award-winning Halau Na Wai. 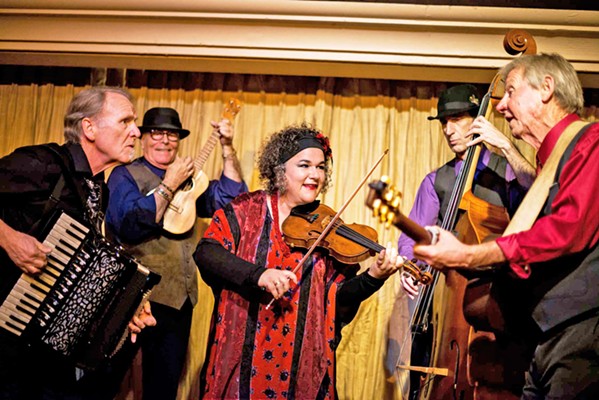 The Cal Poly Symphony concludes its season on Saturday, June 8, in the Harold J. Miossi Hall in the Performing Arts Center's Christopher Cohan Center (8 p.m.; all ages; $12 or $14 for the public, and $9 or $12 for students, at (805) 756-4849). For the first half of the program, Café Musique will join the orchestra on two tangos—Jacob Gade's "Jalousie" and Carlos Gardel's "Por una Cabeza." The second half of the program will feature Pyotr Ilyich Tchaikovsky's Symphony No. 4 in F minor. Prepare to be wowed!