Forever engaged: How long should you wait before tying the knot?

So you've found the person you want to spend the rest of your life with. You went out and bought a ring. You waited until the perfect moment, took them to the perfect place (a fancy restaurant, in front of Morro Rock, on Cuesta Ridge), and after fumbling about nervously, surprised them and popped the question.

They said yes! Hurray! Now it won't be long before someone asks you the question you'll be hearing multiple times for the weeks and months that follow your engagement.

"So when are you two getting married?"

The question isn't always easy to answer. Is it best to skip the planning and rush on over to Vegas to get hitched as quickly as possible? Or is it a better idea to try and draw out the salad days of your happy engagement, putting that wedding as far down the road as you can?

Just what is the "normal" length of an engagement? Even that isn't as cut-and-dry as you'd hope. Wikipedia's history of engagements simply states that "the duration of the courtship varies vastly, and is largely dependent on cultural norms or upon the agreement of the parties involved." Not much help at all. 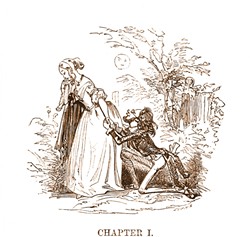 Maybe a look back at how things were done England's Victorian era could yield some better guidance? Those prim and proper Brits who lived between 1837 and 1901 were big on romance, and also etiquette. They had a rule for just about everything, including engagements. According to Victoriana, a modern magazine dedicated to helping its readers capture the "pleasures and traditions of an earlier period," Victorian era engagements allowed couples a little wiggle room within the society's strict rules about interaction. For example, a betrothed couple was allowed to walk in the park or take a carriage ride together without an escort and even hold hands (gasp!) without raising eyebrows. As far as how long they could be engaged before being married, the answer is once again murky.

"The wedding engagement is one of the most charming experiences of a girl's life, and she is wise not to let it be cut too short," Victoriana advises, adding the caveat: "It is only a journey, of which the end must come sooner or later."

If history can't tell us what the ideal time to wait between engagement and marriage is, maybe modern statistics can. This is the 21st century after all. Surely our advanced society can apply the cold, calculating statistical logic to put this prickly question to rest.

Enter the Real Wedding Study. The annual report, created and published on the popular wedding website The Knot, identifies the most fashionable wedding trends and data via a survey distributed to thousands of brides and grooms each year. The latest survey results are from 2016, with more than 13,000 recently married couples participating.

According to the 2016 survey results, the average length of a wedding engagement was 15 months. The Knot's 2016 survey found that couples living in Leigh Valley and Poconos, Pennsylvania, and Orange County, California, had the longest engagements, averaging from 19 to 20 months. Couples in Utah and Mississippi were in a little more of a hurry, waiting between eight and 11 months on average.

One of the reasons for the longer length of engagements in some areas is likely due to the ever increasing cost of getting hitched. According to the survey, the average U.S. wedding in 2016 cost about $35,329. That price tag is even higher for all us lucky folks on the Central Coast. The survey ranked Santa Barbara and Ventura 12th on its list of the country's 25 most expensive places to hold a wedding, with an average cost of $45,957. That's a lot of dough, so it's plausible that many couples might want to wait and save for that dream wedding.

While The Knot got the number when it comes to how long couples are choosing be engaged, its advice on whether a longer or shorter engagement is less than definite.

"We say there's no 'wrong' or 'right' length of time to be engaged—everyone's relationship is different," the website states. "And you and your partner have to decide what's best for you." ∆