Forks, flats, and all the fixins'

Get your bike on at Mitchell Park 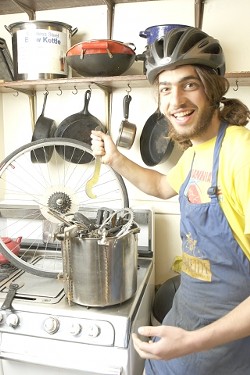 # And now, necessary fixes could make even less of a dent in cyclists' wallets.

In San Luis Obispo, a group of cyclists and mechanics has formed what they call a bike kitchen, but it's basically a community bike shop--a place to get cheap parts and cheaper service for favorite two-wheeled conveyances. There's a catch, though--as with pumping pedals, you have to do the work.

Brian Kurotsuchi, a software engineer by trade, is one of four founders--call them sous chefs--of the SLO Bike Kitchen.

Kurotsuchi said that he had thought of starting a kitchen for a long time, but it really came together when sous chefs started meeting informally at Linnaea's for coffee. There, they started throwing out ideas.

As a bike kitchen, the group hopes to function in several ways: to encourage the use of bikes for transportation by making bikes more available, to encourage sustainability by recycling old bikes and parts, to empower people by teaching them useful mechanical skills, and to get people excited about bikes.

Because the kitchen isn't intended for profit, it's never meant to compete with real bike shops. In fact, several bike shops in town have been helping the kitchen collect used parts.

In March, the group rented a storage space to collect used parts and tools, but finding a permanent location has been a challenge. Currently without a home, SLO Bike Kitchen decided the best way to get started was just to begin helping people fix their bikes.

At the event, people can network with other bicycle enthusiasts, have access to bike repair tools and parts, learn how to do tune-ups and basic repairs, fix flat tires under the guidance of local bicycle mechanics, and share some good food.

The event isn't just for people who already ride bikes, Kurotsuchi explained. It's meant to help anyone who shows up to get more comfortable with his or her bike.

The event is open and free to the public, but since SLO Bike Kitchen doesn't have a home yet, cash and bike equipment donations will be welcomed.

"We hope to become a nonprofit organization," Kurotsuchi said, "and from there we can expand into other programs: bike repair workshops, build-a-bike programs for kids--those are all options. But we want to expand sustainability by finding ways to recycle tubes and tires, and be a place where people can recycle bikes."

Community bike shops are nothing new most major cities have one, including Santa Barbara, where Bici Centro opened a month ago, and Santa Cruz, which is home to one of the most successful examples of a bike kitchen in the country. Cal Poly also offers bike help on campus at the craft center.

Matt Ischler has been working at the college's Bike Repair Room for two years, and developed a passion for bikes. He teaches "Bike Advice" on Mondays from noon to 2 p.m. at the Bike Repair Room. For $2, attendees can watch and learn how to repair their own bikes.

"People need to know how to maintain their vehicles," said Ischler, a senior kinesiology student and Bike Repair Room manager. "People can pay $80 or so for service, or learn how repair it themselves."

May is "Bike Month," and SLO Bike Kitchen will host "Breakfast on the Boulevard" sometime then to encourage people to ride their bikes to work and school. They'll also serve breakfast to those who want to join in on a ride from downtown to Santa Barbara Street in San Luis Obispo. That event is free and open to the public.

For more information about events and bicycle communities, visit www.slobikekitchen.org.

Contact Intern Jen Ingan through the executive editor at rmiller@newtimesslo.com.