It’s been a great month for the LGBT community thanks to the Supreme Court’s righteous decision to protect the right of all citizens to marry whomever they choose, and the timing couldn’t be better since this Sunday, July 12, is the annual Pride in the Plaza celebration starting at noon.

The family-friendly event starts with an interfaith worship service at 12:30 p.m. in the Creekside Amphitheatre. Entertainment starts at 1:30 p.m. with The Betrothed on the Pride Main Stage, followed by local singer-songwriter Jill Knight at 2:15 p.m.

The Community Foundation of SLO gives a special awards presentation at 3:15 p.m., and at 3:30 p.m., drag artists Tommi Rose & The Playgirls perform on the mission steps. 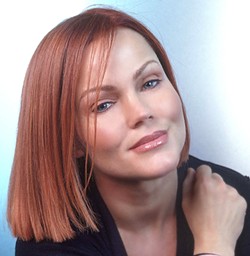 Let’s talk about that headliner! Carlisle fronted The Go-Go’s, who formed in 1978 and were the first all-female band that wrote their own songs and played their own instruments to top the Billboard album chart.

I secretly loved them, but they were a guilty pleasure. I’d get together with male friends and listen to the Sex Pistols, Elvis Costello, and the Talking Heads, but “girl” bands like The Go-Go’s, Scandal, The Waitresses, and The Pandoras I listened to alone.

The Go-Go’s were definitely the best of the lot. While those other bands had a few hit singles here or there, The Go-Go’s were consistent hit-makers. Their debut album, Beauty and the Beat, featured “Our Lips Are Sealed,” “How Much More,” and “We Got the Beat.” Their follow up, Vacation, featured the chart-topping title track as well as a cover of The Capitols’ “Cool Jerk.” The next album, Talk Show, had the hits “Head over Heels,” “Turn to You,” and “Yes or No.” It’s like they could do no wrong, but the inevitable “personality conflicts” and drug problems eventually destroyed the band, and they disbanded in 1985. They still get together and tour occasionally, but the various members went on to their own solo careers, with Carlisle becoming the most commercially successful with hits such as “Mad About You,” “I Get Weak,” “Circle in the Sand,” “Leave the Light On,” and “Heaven is a Place on Earth.”

By age 40, she’d stopped smoking and doing drugs, soon became a vegetarian and a Buddhist, and now lives in the South of France when she’s not touring and performing throughout the world. She’s 56, beautiful, and a masterful performer!

A SLO Pride After Party will be hosted at Novo. Visit slopride.com for more info. 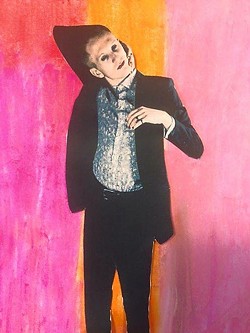 Soul, blues, and rock act Joe Koenig & The Homewreckers plays on Saturday, July 11 (7:30 p.m.; all ages; $10 presale or $12 at the door), with The Turkey Buzzards and the Bob Lawrence Band opening. That’s a lot of great local music right there. 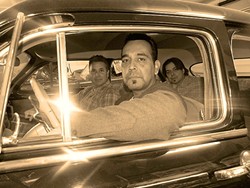 And at Tooth & Nail Winery on Friday, July 10, check out Santa Maria-based rockin’ R&B act The Drive-In Romeos from 5 to 9 p.m. for free. Inspired by the ’40s through ’60s sounds of acts such as Wynonie Harris, Jackie Wilson, and Ritchie Valens, the Drive-In Romeos look sharp, play tight, and will class-up your Friday night.

The third Annual Seven Sisters Fest is finally here, starting Friday, July 10, through Sunday, July 12, at El Chorro Park off Highway 1 across from Cuesta College. The full lineup and tickets are available at sevensistersfest.com, but here are a few highlights. 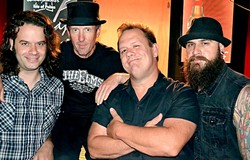 On Friday, July 10, the headliner is New Orleans rockers Cowboy Mouth at 8:30 p.m. They just celebrated their 25th anniversary as a band, and they estimate they’ve performed thousands of shows in front of more than nine million people over the years. Their newest album, Go!, is their 10th, and on the title track, frontman Fred LeBlanc sings, “I’m just a little older, but I ain’t dead yet!” which perfectly sums up this raucous live band’s credo.

In fact, this year’s whole line-up promises to be entertaining as hell. Go, Seven Sisters!

Get your heartstrings tugged

Jill Cohn used to be a regular through these parts, but I haven’t seen the Seattle-based singer-songwriter for at least six months, so the good news for fans is she’s back to play an early, 11 a.m. show at The Shell Café this Sunday, July 12. Get your brunch on, people! 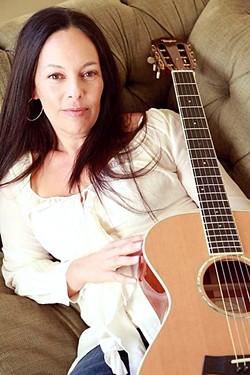 The other good news is she’s got a beautiful new album, Heartstrings Touching Ground, which was released in February.
“I’m just back from a 75-day tour,” Cohn said. “There’s so much to stay on top of with this crazy tour schedule. The CD was on the Americana Radio Charts for nearly 30 weeks this spring and it continues to get good reviews.”

Small wonder. The 14-song collection is stacked with great original music and three choice covers: “California Blue” (by Jeffrey Lynne, Roy Orbison, and Tom Petty), “’Til Dreams Come True” (by Buck Owens and Dusty Rhodes), and “Me and Bobby McGee” (by Kris Kristofferson and Fred Foster).
Recorded, produced, and mastered by Malcolm Burn (Daniel Lanois, Bob Dylan, The Neville Brothers, Iggy Pop, John Mellencamp, Patti Smith, Emmylou Harris—I could go on, but you get the idea), the album is Cohn’s best to date.

“Working with Malcolm Burn was a dream come true for me,” Cohn said. Burn performed bass, piano, and guitars on the album, with Manuel Quintana providing percussion. The songs are gorgeous, Cohn’s voice is lilting and lovely, and the instrumentation strikes exactly the right tone.
She’ll perform solo this Sunday.

Americana songwriters Matt Woods and Adam Lee are currently in the midst of their The Bass & Trouble Tour: Ride West, which makes two local stops this week, Thursday, July 9 at Dunbar Brewing in Santa Margarita and Friday, July 10, at Camozzi’s in Atascadero. Woods’ song “Dead Man’s Blues” was named song of the year by Saving Country Music, and Lee’s song “Broken Wings” was featured in Kevin Smith’s feature film Tusk. They’ll perform as solo artists and do a handful of duets. 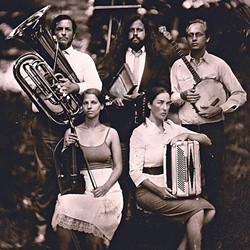 The Painted Sky Concert series returns with an intimate evening with singer-songwriter Jackie Bristow on Friday, July 10 (8 p.m.; all ages; $18 tickets at Cambria Music Box Shoppe, Boo Boo Records, or by calling 927-8330). In 2013, Bristow was personally chosen by Bonnie Raitt to open her New Zealand tour. Performing music both heartfelt and sophisticated, Bristow “combines subtle but beautiful melodies and hooks that hypnotize the listener, demand complete surrender, and then stick around with the backbone of a real friend,” according to her press materials.

The G Burns Jug Band returns to the Red Barn Community Music Series this Saturday, July 11 (5 p.m. potluck; show at 6 p.m.; all ages; $15 at the door), to play “old American music with an intensity and authenticity rarely heard today: urban blues, mountain fiddle, and popular music of the 1920s and ’30s.” Led by multi-instrumentalist and native Kentuckian Clinton Davis, this is a great old-timey band that’ll get your feet stomping.

Usually the only way to see Lawrence Rengert (aka Prins Lawrence) is when he’s playing with Chasing Rainbows, a Santa Barbara/Amsterdam-based music collective with five core members. “I grew up on the Central Coast and went to Arroyo Grande High School [but] have been touring the world and doing music ever since. I’ll be performing under the name Chasing Rainbows, doing two acoustic sets at Linnaea’s Café on Saturday, July 11, from 8 to 10 p.m.,” Rengert said. “This Summer I’m doing a solo acoustic tour of California playing our band material that I wrote.” Expect “hints of The Velvet Underground, Syd Barrett, and Townes Van Zant,” as well as “Americana greats Wilco and My Morning Jacket.”

The Roustabouts Bluegrass Band, a veteran bluegrass band headquartered in Bakersfield, has three local shows for you: Saturday, July 11, at 1 p.m. at the Nipomo Bluegrass and Beans Festival, later that same night at 6 p.m. at Last Stage West for a CD release party (for Patchwork); and Sunday, July 12, a noon at Avila Valley Barn. “We’re a ‘hat trad’ band and play in the traditional style and give a tip of our hat to the ‘Bakersfield sound,’ which influenced all of the members of the band,” said member Kelvin Gregory. “We have multi-state champions on respective instruments in our band, and we’ve been mainstays in the California Bluegrass scene over the last 25 years. Our mantra is ‘suits, boots, and hard drivin’ bluegrass,’ and we work hard connecting with our audience and putting on a good show for folks that attend our shows.”