A 64-year-old Pismo Beach woman is suing the SLO County Sheriff's Office, claiming she suffered a gruesome injury that caused her to lose part of one of her fingers while in custody.

Lisa Forman was in custody at the jail when an unknown officer allegedly slammed a cell door shut on her hand, causing the amputation of a section of one of her fingers. 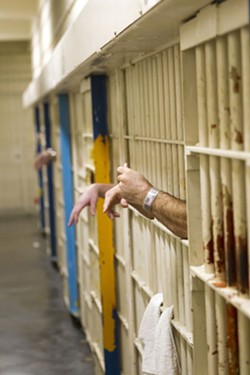 "It was horrible," Forman told New Times. "It was the most horrible experience of my life."

The lawsuit states that the incident occurred on Jan. 24, 2018, the same day court records show that Forman was booked in the jail after being arrested by Pismo Beach police for suspected public intoxication. The SLO County District Attorney initially filed a single misdemeanor charge against Forman in March of that same year. A SLO County Superior Court judge dismissed the criminal case against Forman on July 27, 2018, at the request of the DA's office, the records show.

Forman said she was treated for her injury at Sierra Vista Hospital, but only after a lengthy wait at the jail. The incident caused her to lose the top third of her pinky finger on her left hand.

"That's my dominant hand, and I'm an artist," she said.

Forman also said she believed that the jail deputy shut the door on her hand on purpose, but declined to give further details about the incident. Records obtained by New Times showed that Forman initially filed an administrative claim against the county in July 2018, asking for $1 million in damages. The county rejected that claim in August of the same year.

Forman's SLO-based attorney, Trevor Creel, declined to comment on the lawsuit. In an email to New Times SLO County Counsel Rita Neal said the county had not been served with the civil complaint, but noted the county's previous rejection of Forman's claim and said that the county does intend to defend itself against the lawsuit. Δ