An outspoken opponent of environmental regulations is joining the SLO County Planning Commission.

Del Campo hosted the KPRL radio talk show Sound-Off! for six years before recently leaving the station. Prior to joining KPRL, Del Campo served as a Thousand Oaks City Council member and on the board of the Ventura Council of Governments between 1998-2002. 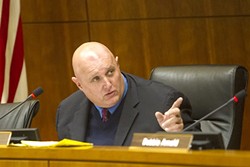 Peschong called Del Campo an “exceptional” pick and praised his experience and abilities.

“I looked at his career, his ability to articulate issues and ideas, and the fact that he is very detail-oriented, which is needed on the planning commission,” Peschong said.

In his column for the conservative blog site Brietbart California in 2014, Del Campo wrote in support of expanding hydraulic fracturing in the Monterey Shale. In a videotaped appearance speaking at a North County Tea Party event the same year, Del Campo more broadly criticized environmentalism.

“Let’s talk about who controls the water in the state of California. Does anybody know? It is the environmentalists,” he said at the event.

Del Campo has repeatedly expressed opposition to the notion of man-made climate change on Twitter. In 2015, he tweeted, “If we burned all the world’s fossil fuels tomorrow guess what would happen to sea levels ... liberals will not like this.”

Supervisors Hill and Bruce Gibson had strong reservations with the choice, and Hill voted “no” on the appointment.

“In the end, Mr. Del Campo’s performance will be judged on the Planning Commission,” Gibson said. “We would hope that he evidence traits different from what I’ve seen in his public record.”

Prior to the supervisors’ vote, Del Campo addressed the board at the lectern.

“I take this very seriously. I know it’s an important position, and I hope to gain your confidence as time goes by,” he said.

The Price Canyon oilfield expansion application to drill more than 350 new wells between Highway 227 and Pismo Beach is currently under review by the Environmental Protection Agency for an aquifer exemption. If that exemption is granted, the commission will eventually review the oilfield expansion proposal.