Grab your Vegemite sandwich and get ready to head to a land down under when former Men at Work frontman Colin Hay plays the Fremont Theater this Sunday, July 23 (9 p.m.; all ages; $39.50 presale at ticketfly.com or $42 at the door).

Men at Work is perhaps Australia's biggest rock act, which in 1981—thanks to MTV and the video for "Down Under"—quickly found global fame and fans. Songs like "Who Can it Be Now?" and "It's a Mistake" kept the band in the limelight throughout the New Wave era.

The band broke up and reformed a few times over the years, but these days Hay is doing his own thing, most recently on the album Fierce Mercy, his 13th solo release, which came out earlier this year and explores topics such as "love and loss, mortality, and even the odd UFO sighting," according to press materials.

"Come Tumblin' Down" has a country rocker feeling while "Secret Love" offers another soaring ballad—the story of a young boy's first love. These are narrative cinematic songs with a sense of urgency.

"When you're in your 20s, you think you've got all the time in the world," Hay explained. "You get older, and you go through a quickening. Everything seems to get faster."

Expect selections from his solo work as well as a few Men at Work hits during this show brought to you by Otter Productions Inc.

Industrial band Ministry featuring famed frontman Al Jourgensen plays the Fremont Theater this Saturday, July 22, during a Numbskull and Good Medicine Presents show (8 p.m.; all ages; $33 presale at ticketfly.com or $35 at the door). 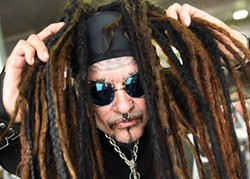 Jourgensen is considered the godfather of industrial music, but if you go all way back to when Ministry formed in 1981, you'll recall they started as a New Wave synth pop act, transforming into the industrial powerhouse in the mid-'80s and gaining mainstream traction in the early '90s with their fifth album Psalm 69: The Way to Succeed and the Way to Suck Eggs and the Lollapalooza Festival.

Jourgensen is one of the most recognizable figures in rock, with his array of facial piercings, dreadlocks, and stovepipe hat. Born Alejandro Ramirez Casa in Havana, Cuba, he and his mother moved to Chicago when he was young and she married a Norwegian stock car mechanic and driver named Jourgensen.

He was attracted to music from a young age and did stints as a club DJ in college, eventually joining Frankie Nardiello (aka Groovie Mann) and Harry Rushakoff to form the short lived Special Affect. Nardiello went on to form My Life With The Thrill Kill Kult, and Rushakoff started Concrete Blonde. After his early forays into synth pop, of which Jourgensen subsequently said, "That shit was garbage and an abomination; it should have never had the Ministry moniker," he dug deeply into what would become the industrial genre. The rest, as they say, is history.

A few highlights that added to Jourgensen's bad boy reputation include the time he defended his daughter from the advances of R&B star R. Kelly by smashing a suitcase against his head, and when filmmaker Stanley Kubrick made a scene for Ministry in his film A.I: Artificial Intelligence. The man and his band are legend!

The heart of the Mid-State Fair

This week marks the fattest week of the California Mid-State Fair, which closes on Sunday, July 30. Visit midstatefair.com for tickets.

On Friday, July 21, in the Chumash Grandstand Arena, check out The Chainsmokers (7:30 p.m.; all ages; $51 to $131 at), who just won a Grammy Award in the Best Dance Recording category for their worldwide hit "Don't Let Me Down," featuring Daya. Electronic artist Justin Caruso, a junior in USC's Thornton School of Music, will open the show. California country artists (think, The Eagles) Midland play the Fort Frontier Stage (6:30 and 8:30 p.m.; all ages; free).

On Saturday, July 22, Top 40 radio rockers Matchbox 20 and Counting Crows play the Chumash Grandstand Arena (7 p.m.; all ages; $41 to $96). It's the 20th anniversary of Matchbox 20's breakthrough debut album Yourself or Someone Like You, which has sold more than 15 million copies. Pretty good, but Counting Crows' breakout album August and Everything After sold 20 million. Up-and-coming country music artist Brooke Eden plays the Fort Frontier Stage (6:30 and 8:30 p.m.; all ages; free).

On Sunday, July 23, future (aspiring) Michigan senator Kid Rock plays the Chumash Grandstand Arena (7:30 p.m.; all ages; $56 to $101). The multi-platinum award-winning American rock icon who mixes hip-hop, heavy metal, and country into his own style, is famous for hits such as "Bawitdaba" and "Cowboy." Even though he's a right-wing nutter eclipsed in his nuttiness only by Ted Nugent, I can't help but love Kid Rock's music. It's a guilty pleasure! Tex-Mex act Little Joe Y La Familia plays the Fort Frontier Stage (6:30 and 8:30 p.m.; all ages; free).

On Monday, July 24, singer-songwriter John Mayer takes the Chumash Grandstand Arena stage (7:30 p.m.; all ages; $51 to $131) with his full band, solo acoustic, and trio sets in support of his forthcoming full-length album, The Search for Everything. The Night Game will open the show. All-female group Runaway Jane plays the Fort Frontier Stage (6:30 and 8:30 p.m.; all ages; free). If you like The Dixie Chicks, you'll dig these ladies' three-part harmonies.

On Tuesday, July 25, get ready for some great singer-songwriter pop music by Hunter Hayes and The Band Perry on the Chumash Grandstand Area (7:30 p.m.; all ages; $31 to $71). Multi-instrumentalist Hayes is best known for his three No. 1 hits: "Wanted," "I Want Crazy," and "Somebody's Heartbreak." The Band Perry is best known for their No. 1 single "If I Die Young." Former Monkees drummer Mickey Dolenz plays the Fort Frontier Stage (6:30 and 8:30 p.m.; all ages; free). Expect hits like "Daydream Believer" and "I'm A Believer."

And finally this week, on Thursday, July 27, Garth Brooks with Trisha Yearwood play the Chumash Grandstand Stage for two shows, which I believe are sold out (7:30 and 10:30 p.m.; all ages; $79.98) Brooks recently won Entertainer of the Year at the CMA Awards for a fifth time, a first for any artist.

Nashville singer-songwriter Amelia White plays Templeton Tennis Ranch this Thursday, July 20 (7 to 8:30 p.m.; all ages; $15). With a sweet and smoky voice backed by her vintage mahogany Martin and 1961 Gretsch, "she'll be singing songs of mismatched love, hopelessness and hopefulness, and dark dreamy road-logs," according to press materials.

For the Folks presents its second benefit concert of the summer in support of Pacific Wildlife Cares on Friday, July 21 (7 p.m.; all ages; $10 at the door), at the Whalebird Kombucha factory in SLO. Soulful, eclectic indie act The Monroe headlines, and brilliant Americana act The Creston Line opens. Expect a "mini-festival atmosphere with local crafts, food, beverages, fire-dancers," according to organizers. Their last fundraiser donated $1,200 to the Land Conservancy of SLO.

Feufollet, a Cajun/Louisiana roots band from Lafayette, La., plays a SLOfolks show at Castro Cellars this Saturday, July 22 (7 p.m.; all ages; $25 presale at 238-0725). Get ready to dance to this honky-tonk, accordion, and string band.

Don't forget this Saturday, July 22, Ladyfest III returns to the SLO Guild Hall (2 to 11 p.m.; all ages; $10 or free for kids 10 and under) with performances by Hot Tina, Hayley & the Crushers, Bearcats, and about 30 more acts! The following day, on Sunday, July 23, Bang the Drum hosts the Ladyfest after-party from 1 to 6 p.m. with Sierra & Michael, Erin Montgomery, Maya Songbird, and DJ Stephanie Walker West spinning between sets.

Americana artist Antonette Goroch plays Linnaea's Café this Tuesday, July 25 (7 p.m.; all ages; pass-the-hat), her first return to town in a year. "For the last six months, I've been living in Bologna, Italy, and working on a new recording," she said, so expect some new material.