Tucked into the hills of Los Angeles, a man sits inside of a closet whose walls are covered with thick black blankets to dampen any sounds going in or out of the cramped space. He knows what he has to do to get out of that claustrophobic cage, so he takes a deep breath, counts to five, and hits "record."

Who is this mysterious man? 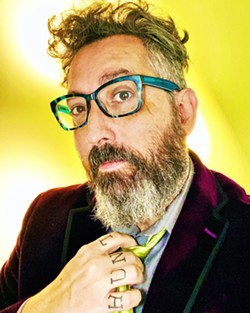 While his usual beat is selling scripts and writing books, the quarantine has given Vienna a whole new avenue of storytelling, this time in podcast form with a thrilling six-part horror story called Barren. Voiced by Vienna himself, the story follows journalist Peter Sommers as he returns to his hometown and the site of his grandparents' farm and apparent suicide. Recording himself as one-sided conversations with his paramour, Natalie, we soon learn that Peter is neither welcomed nor wanted in that small town. Mutant animals and bizarre findings around the farm lead Peter down a crazy wormhole looking for answers.

New Times sat down with Vienna via Zoom to find out how this project came about and what it actually looks like to write, star in, produce, and edit this type of radio-drama podcast.

The tale Vienna is weaving is one he has had in his brain for the last 30 years. He was a 16-year-old when he came up with his own spooky story and thought, "I'll turn it into a novel; how hard could it be?" Nothing like the confidence of youth, right? Well, here he is decades later, and while that book may have not come about yet, that story is still finding its way into his work.

Is this type of sci-fi horror in his usual writing wheelhouse?

"No, it's not—and I'll say this, I've always wanted it to be. When I was in high school, I was trying to mimic Stephen King's style because that's pretty much all I read back then. I've been a horror fan my whole life, but most of my stuff has been humor and commentary."

He does have a script being shopped around right now, a sort of horror adventure: "Kind of like X-Files, where you have the opportunity to make it really scary or you can lean more into humor," Vienna explains.

He was knee-deep into turning his long-stewing idea into a feature film script when COVID-19 hit, and he was soon stuck in quarantine.

"Well, let me just do it as a podcast," he quipped.

Man, this guy is adaptable! Company Rooster Teeth is still shopping his script around, and his logic told him, "Well, if they're successful and this goes, I really should know more about podcasting than I do." 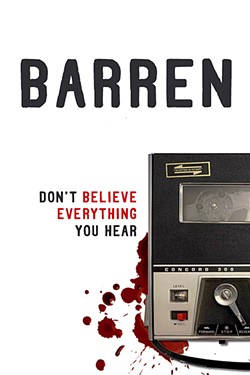 He's got an advantage in that department; his wife, Larissa Collins, has a host of experience in voice work and audio production.

"The reason I'm able to make this good is I'm lucky in that Larissa has Pro Tools software, and she has a really nice microphone. She showed me how to do the basics of it when I did the audiobook of my first book."

Vienna also relies on expertise outside of his marriage—he turns to his teammates at his production company Ridiculous Danger.

"My producing partner Tyler's regular gig is working at a company that does scores for TV shows and films. So as I'm mixing each episode, I am texting him going, 'How do I make it sound like they're in a big room?' He'll just pull up his Pro Tools and take a screenshot."

Vienna's podcast Barren has heaps of sound quality and talent. While almost all the dialogue comes from Vienna's Peter, that wasn't always the story's voice.

"It was never supposed to be that way. I had to retell the story in a way that made it mostly one voice, just out of necessity."

He did manage to wrangle actor friends from across the country to play the sparse roles needed to round out the town Peter finds himself in. One of the main townspeople we hear from is rare-book dealer Callum McDonough voiced by Josh Burns, who recorded from his home in Pasadena. David's wife, Larissa, plays various townspeople as well as Natalie. High school friend James L. Rogers III plays Detective Tuttle, recording all the way from Washington, D.C. Getting all of those voices to sound cohesive is no easy task, and each episode is a week of work from writing, recording, and editing.

"A week, if I'm lucky and everything goes right," Vienna amends.

All of his hard work will hopefully pay off, but the podcast game is tough. How does Vienna navigate promotion in an already saturated market?

"The main thing I want people to do is, if they like it, is to rate and review. Apple Podcasts is more than half of the market, and that's still kind of the go-to place to find podcasts. The more reviews and ratings you get, the more attention the algorithm pays to you," he said.

Barren is available in its entirety on Apple Podcasts, Spotify, and more. Curl up with two fingers of whiskey and get ready to be spooked—and don't forget to rate and review. Δ