Anyone Can Be President by David Vienna is available on Amazon in paperback for $16.49. For more information on Vienna and his work, visit davidvienna.com.

While the 2016 presidential election blew up the unity of the country like fireworks going off on the 4th of July, it did make one thing clear to everyone: Just about anyone can be president.

David Vienna, author and former New Times arts editor, doesn't remember that moment nearly three years ago when Donald J. Trump was announced the next leader of the free world because he was blackout drunk in his own sadness. But Vienna found a silver lining: As a result of that election, more and more normies who didn't have a background in politics would start to get involved and run for office. Vienna also got a book idea out of it.

Anyone Can Be President, which was released in April, is part running-for-president for dummies, part cheeky satire, and part political/comedy quiz fodder. Vienna spoke with New Times about journalism, politics, and making fun of everything.

New Times: What's your background with journalism and politics?

David Vienna: My father was a lobbyist in D.C., and my mom was a reporter covering news at the Washington Post and small, community papers, so that was always our dinnertime conversation. I wrote at the Santa Maria Sun, New Times, and The Tribune.

NT: Describe where you were and what you were doing and feeling the night of the 2016 presidential election?

DV: I can't because I got blackout drunk. Like a lot of the country, we were surprised and shocked. It was a terrible night. When Trump was elected it was huge steps backward.

NT: What inspired you to write Anyone Can Be President?

DV: Well, Trump really. That's kind of the big, glowing racist bulb in the room. And seeing people like AOC [New York Congresswoman Alexandria Ocasio-Cortez], who didn't have a specifically political background, that felt inspired and I thought, "Oh, if he can do it, we can do it." There are a lot of people who took seats who down the road I think would make good presidents. 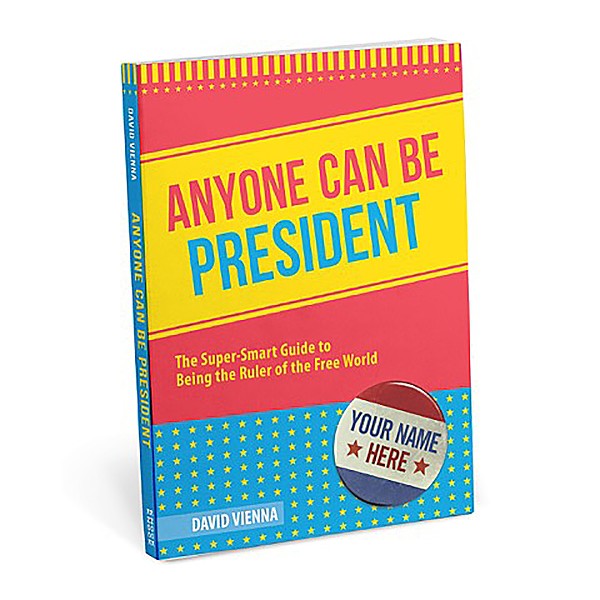 NT: Would you say that more people getting involved in politics is sort of the silver lining in this situation?

DV: I think there was that rude awakening of, "Oh, we don't just have to grumble about it, we can get as involved as we want and run for office." I think it's good that D.C. is getting shaken up.

NT: Has anyone who has read your book not picked up on it being satirical?

DV: I think it's pretty clearly a satire. The way the publisher describes it is it's humorous nonfiction.

NT: What are your thoughts on the current state of the country?

DV: I kind of feel like I'm hoping it's that darkest-before-the-dawn thing. I feel like what's happening right now is we've always been cocky as Americans about our government, and Trump is showing us where all the weak spots are. I don't like the vitriol and the division, but I feel like that wave of civic engagement is only going to increase and that's always a good thing.

DV: Anyone can, yes. Not everyone should. You can't have a government for the people, by the people if you're going to say, "No, not these people." I think we need to revamp the campaign process, specifically. I would love to see people going back to taking only federally offered money, and everyone has the same capped budget, and it's low. I'm also a supporter of an IQ test because I kind of want the person running things to be the smartest person in the room. Δ

Arts Writer Ryah Cooley doesn't want to be president. Contact her at rcooley@newtimesslo.com.