Ryan Miller's first book, How to Feed Your Parents, is scheduled to be released on Aug. 7. To preorder the book, visit amazon.com. More info: standingintheshallows.com.

Ryan Miller isn't used to being interviewed by journalists. In fact, he's used to things being the other way around.

"It's interesting being on this side of things," he said during an interview with New Times.

Central Coast residents may remember Miller as an editor for both New Times and the Santa Maria Sun. But now, three years after moving to Sacramento to be closer to friends and family, Miller is back on the literary scene.

The former journalist wrote his first book, a children's story about cooking. How to Feed Your Parents, inspired by Miller's own children, is an illustrated short book written to get kids excited about cooking and eating healthier.

Miller's roots in SLO and Santa Maria extend back to when he was a journalism student at Cal Poly. He went on to work as a journalist and editor at the Sun and New Times until moving to Sacramento in 2015 to work in marketing.

"It's always been a dream goal of mine to write children's books," Miller said. "I always wanted to be a writer. I told my mom when I was 4 years old that I wanted to be a writer [and] a journalist. ... In college I had some book ideas going, for older readers, but I just always had something going on. I tried sending them places before but didn't get any interest."

The father of three said he spent a lot of time reading and studying children's books and getting to know the market. Miller said he reads to his kids at night as much as possible, which helped him learn what kinds of books work best for young children.

"Humor for sure," he said. "Kids love to laugh. The books that they ask for over and over are the books that really make them laugh. ... Another my kids really respond to is books with strong female protagonists."

In Miller's book, Matilda Macaroni finds herself longing to taste fancy dishes, but her parents are reluctant to try anything new. Hooked on chicken nuggets, hamburgers, and noodles (all popular dishes with picky kid eaters, Miller pointed out), the Macaronis hesitate to try anything out of the ordinary. In her determination, young Matilda enlists the help of her grandmother and babysitter, who teach her fundamentals of cooking safety and some new recipes. 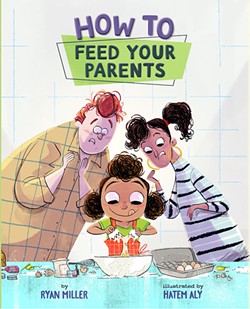 The book also includes a recipe for quiche that Miller said was created by him, his wife, and their three children working together. He said the idea for the premise of How to Feed Your Parents came from his own children.

"My oldest daughter got really interested in cooking several years ago," Miller said. "So my wife and I decided, 'Let's just teach her how to do it safely, so she can use a kitchen knife to chop things or she can use the stove safely if there's an adult around.' One of the things I emphasize in my book is that there is always an adult present."

Miller credits a Sacramento comic book store for giving him the inspiration to complete the book. The book was written over a series of open writing nights at Empire's Comics Vault.

"Writing is really solitary," he said. "So here you can come write with other people. I would go on those nights and work on a book or do freelance writing. And it was a great way to be committed and have an excuse to go write."

Miller said he is planning to attend some Central Coast-based events in September to help promote the book and do more outreach about the value young children can get out of learning to cook.

"With my kids, if they have a hand in selecting and preparing what we're going to eat, they are far more willing to try it and taste it and enjoy it," he said. "Because they feel some ownership with it, it's not just mom and dad telling them to eat their vegetables." Δ