Arguably, no one’s done more for the downtown SLO music scene than Todd and Korie Newman. When they bought SLO Brew from Mike and Becky Hoffman almost a decade ago, the club was a hot mess: dirty, fight prone, and recycling a lot of tired music through it. They revamped it, revitalized the restaurant, and brought in some amazing acts considering the size of the venue.

Just because they’ve now divested themselves of the Brew doesn’t mean they still don’t have a burning desire to bring great music to town, which is why they’ve created Good Medicine Presents, a brand new production company that will hit the ground running next month with two shows at the historic Fremont Theater. 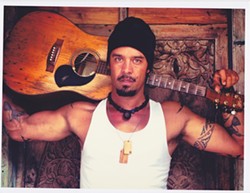 I’ve long thought the Fremont should have a second life as a music venue. In today’s movie market, it’s simply too big to be profitable. But what an amazing venue it is! It’s gorgeous inside, the acoustics are outstanding, and if the public supports shows there, we can expect more to come.

“Good Medicine was Korie’s brainchild,” Todd explained. “When we had the opportunity to move to Cayucos 14 years ago on the yurt property, Korie coined the term good medicine for our soul because it was such a peaceful, beautiful spot, and when we were dealing with the transition away from SLO Brew, we thought about those words and that feeling because we wanted our next endeavor to be driven by our convictions. We’ve been very fortunate to enjoy consistent gratification from our community at SLO Brew, and we want to continue that. Since we’ve benefited from it, we feel like we need to give back by continuing to bring art and culture to downtown SLO. The Fremont seems like the perfect place because of its heritage. The venue really captures our imagination and fancy. And, as far as working with Michael Franti and Ziggy Marley, we’re really drawn to their positive message, and Ziggy’s Dragonfly album was really important to Korie and me when we first started developing SLO Brew, so working with Michael and Ziggy on our first shows as Good Medicine is unbelievably important for us.”

I’ve been a fan of Franti’s since he formed The Disposable Heroes of Hiphoprisy in 1990. Before that, he was part of the industrial punk/spoken word act The Beatnigs, and after Hiphoprisy disbanded in ’93, he formed Spearhead.

“In every show that I do with my band Spearhead, I always take time to do a few songs with just me and my guitar and strip it down to the bare bones so the lyrics and melody can shine through,” Franti said in press materials. “I’ve done lots of acoustic sets but never an entire tour, so I am thrilled to be doing this for the first time!”

He’ll perform songs from his 10th studio album, All People, as well as new material.

“I find inspiration in simplicity, and when I write a new song it has to stand up as an acoustic song before I record it with other instrumentation,” he explained. “I’ve been writing songs for a new record, and I’ll be working many of them out on this tour. I’ll be playing a mix of old, new, and songs still in their seedling form.”

He’s carried on his father’s legacy of socially conscious music and political activism, preaching peace and practicing philanthropy. He’s also now an author, having penned I Love You Too—a children’s book based on the song of the same title off his Grammy Award-winning children’s album Family Time.

Ziggy Marley and Michael Franti live and in person in the Fremont Theater? That’s what I call Good Medicine, whose motto is “Good for what ales you,” so expect some tasty beers to be available for purchase. Tickets won’t last, so if you want to see these shows, get ’em while you can.

The Basin Street Regulars and the Central Coast Hot Jazz Society have been quietly keeping traditional jazz alive in Pismo for decades with their monthly dance concerts, but every October they go crazy big with their Jubilee by the Sea—a three-day festival, which this year happens Friday, Oct. 24, through Sunday, Oct. 26, with tons of music at five locations! 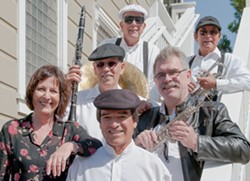 There’s simply too much to list, so for a complete schedule, you’ll want to visit their pismojazz.com website and follow the Jubilee by the Sea links. Some of the many highlights include piano great Carl Sonny Leland at 10 a.m. on Friday at Marie Callenders. In fact, Leland will also be sitting in with the Creole Syncopators at 11:15 a.m. in St. Anthony’s Turk’s Place and at 1:45 p.m. back at Marie Callenders. Expect to see a lot of collaboration over the weekend!

There’s also a Thursday Night Oktoberfest from 6 to 9 p.m. on Thursday, Oct. 23, with The Mud Skippers at the Addie Street tent, and a Saturday night swing dance with such acts as the Midiri Brothers and the Royal Garden Swing Orchestra starting at 4:30 p.m. at St. Anthony’s Turk’s Place and Lu’s Landing during this world-class traditional jazz fest that celebrates traditional jazz, Dixieland jazz, hot jazz, and music of the ’20s and ’30s. Buses run continuously between the venues so you don’t have to worry about driving and parking.

There are three-day tickets, one-day badges, and student tickets available at the door or on pismojazz.com. Beer and food will be available for purchase at the various venues.

I went to SLO Brew last weekend, and they were out of the beer I wanted. A brewpub that’s run out of beer? Say it ain’t so! I miss Todd Newman’s hand on the tiller already, but there’re still a bunch of shows for the week that Todd lined up months ago, starting Thursday, Oct. 23, with Grieves (8 p.m.; all ages; $12 presale or $14 at the door). Sol and Jp The Diesel will join the Seattle rapper.

If you’re a fan of classic rock of the ’70s and ’80s, check out Sundy Best on Monday, Oct. 27 (7:30 p.m.; 21-and-older; $13 presale or $15 at the door). “We want to create something that will stand the test of time, like Seger or the Eagles,” the duo said in press materials. “We don’t really have a standard genre. If people want to call us country, let them. But with Bring Up the Sun, you’ll get a really good sense of what we’re doing in our style of country music, and it’s got ’70s classic rock sounds with a little pop, rock, and bluegrass.”

And on Wednesday, Oct. 29, prepare yourself for the lush sounds of St. Lucia: The Night Comes Again Tour with special guest Robert Delong (8 p.m.; all ages; $16 presale or $18 at the door). This is great nostalgic pop.

On Saturday, Oct. 25, the adult-themed X-Ball, the best party of the haunting season, happens at the SLO Masonic Lodge. This is a great annual masquerade party to benefit KCBX 90.1FM with music by the always-entertaining Burning James and the Funky Flames.

The doors open at 6 p.m., and the show starts at 7:15 p.m., with Burning James and his new “right and tight funky horn section” with Aaron Wolf on sax and Bob Bennett on trumpet.

A delicious Creole menu prepared by Bon Temps Creole Café will be available, as will a full bar sponsored by Signature Events. This is a kick-ass party! Tickets cost $22 presale (at Bon Temps and burningjames.com) or $25 at the door (if there are any left!).

Hailing from Leeds, England, The Dunwells play Cal Poly’s Spanos Theatre on Friday, Oct. 24, at 8 p.m. Best known for “striking an organic blend between acoustic and electric roots music laced by luscious vocal harmonies,” according to press materials, the band’s return to Cal Poly has been highly anticipated since their opening gig for Los Lonely Boys two seasons ago. Student and adult tickets are $24 and $30 (call 756-4849).

Acoustic Americana artist Kelley McRae plays Luna Red on Friday, Oct. 24, at 10 p.m. McRae hails from Mississippi, but called Brooklyn home before teaming up with guitarist Matt Castelein in 2011. The duo ditched their NYC apartment for a VW camper van and hit the road. McRae might make you cry. Acclaimed film director Wim Wenders told the San Francisco Chronicle that her songs move him to tears.