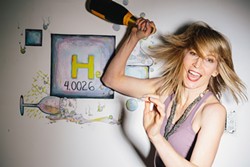 If you’ve ever watched The History Channel television show Brad Meltzer’s Decoded, or if you happened to live in SLO in the mid-’90s and followed the music scene, you've seen Christine McKinley—the willowy, Cal Poly-educated mechanical engineer and ethereal musician who eventually escaped SLO town for the larger (and arguably hipper) Portland music scene.

I hadn’t seen McKinley, who likes to go by her last name, in quite awhile when, a few years ago, I stumbled upon an episode of her TV show in which she and fellow mystery-solvers, Buddy Levy and Scott Rolle, are assigned by novelist Brad Meltzer to unravel one of history’s riddles involving, say, D.B. Cooper or Confederate gold or the Spear of Destiny.

“Hey, I know her,” I said to my wife. “She used to live in SLO and is a wicked awesome musician.”

A couple months ago McKinley sent me an email to tell me about her newest endeavor, a science book about physics. Hey, wait a minute! Don’t turn the page! Keep reading! It’s a fun science book. I mean, it’s called Physics for Rock Stars: Making the Laws of the Universe Work for You. Part memoir, part science book, and part survival guide, she explains in the most entertaining way you can imagine her education and the teachers who were most influential. She also poignantly writes about her inspiration, her step dad Chuck, a ship’s engineer. Oh yeah, there’s also a bunch of clear explanations about the basics of physics.

Unlike a textbook, humor reigns throughout. When explaining how to create a free-body diagram to determine the forces at work on an elevator full of clowns, McKinley offers this aside: “In the first stages of engineering a system, a free-body diagram is traditionally drawn on a napkin. Even if there is a perfectly good pad of graph paper within reach, engineers like to sketch things on napkins. It makes us feel like we are renegade geniuses. We imagine ourselves part of a tradition: Galileo secretly scratching diagrams of the orbiting planets on his wall during his house arrest, da Vinci sketching the first diagram for a helicopter on a wine-stained coaster in Florence, or Marie Curie scribbling results of experiments in one of her radioactive notebooks.”

A natural performer, McKinley explains the physics of fancy microphone throws, how to execute the perfect stage dive, and how to escape from a sinking car with your outfit intact, as well as other essential skills. As her book jacket mentions, “These days, it often seems like there’s nothing we can count on … [but you can always] trust the laws of gravity, motion, energy, and entropy.”

“There is no better model for our lives than the laws of physics,” McKinley writes in her book’s intro. “The atoms we are made of must, quite literally, follow them. If you try to follow a different set of rules, you will be scattered and frustrated. You can’t break the laws of physics, but they can break you. But the laws of physics won’t fight you if you don’t fight them. In fact, if you understand and work with them, the laws of physics will hold their little lighters up and sing along while you play the rock anthem that is your beautiful life.”

Check out Christine McKinley when she reads from her book and plays music this Thursday, July 24, at 8 p.m. in Linnaea’s Café.