Philharmonic Board President Jed Beebe announced that longtime maestro and Music Director John Farrer had moved to Texas and would no longer serve as the society’s music director. 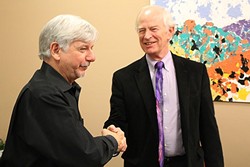 “This marvelous opportunity to hire one of the most fabulous musicians in the area has come our way,” Beebe said. “We’re just so excited to have Michael Nowak as the new director for the Santa Maria Philharmonic Society.”

After serving as the SLO Symphony’s music director for 31 years, Nowak parted ways with the organization, telling New Times that his contract was “severed.” A statement from the symphony’s then-executive director simply said Nowak had left his position.

Either way, the recent announcement is exciting news for Nowak’s fans and anyone who has followed Santa Maria Philharmonic’s saga over the last few years. A budget scare three years ago almost shuttered the organization. Since then, fewer concerts called on Farrer and instead used local collaborators like James Riccardo, Opera SLO’s Brian Asher Alhadeff, and Greg Magie.

The chance to hire a music director who lives on the Central Coast, and one as esteemed as Nowak, is a sign of the symphony’s resurgence, Beebe said at the press conference. Just before Nowak spoke, board member Lynne Garrett remarked that Nowak’s involvement would help make the orchestra a more visible and celebrated part of the community.

“I see there being great opportunities for growth in this area with the large population that’s here,” he continued. “I think there’s many ways we can expand our audiences with music education, getting young people involved in music, outreach programs in schools, and to get their families involved.”

Nowak also said that he’s already at work planning the next season’s concerts and is reaching out to collaborators to perform with the orchestra. He has been a longtime conductor for movie scores, and did work on films such as Life of Pi, The Kite Runner, and King Kong, so he has plenty of big-name contacts.

“I’m going to work hard at a concept of bringing a concert hall to the area,” he said. “That’s one of my plans as music director is to get there to be a temple of music in the area, whether it’s at Hancock College or somewhere nearby, but the orchestra deserves its own home, and let’s see if we can get started working on that idea.”

Most of the Santa Maria Philharmonic Orchestra’s players have worked with Nowak before, according to Garret, and are already looking forward to getting started on the next season’s music. The 2016-2017 season will gear up in September, Beebe said.

“We’ve got time to raise the money, and we hope this will generate some excitement in the community and raise some support,” Beebe said. “We’re excited to have somebody that’s planning the season other than the board, so that there’s a continuity from concert to concert, so that the season has a vision.”

Arts Editor Joe Payne from New Times’ sister paper to the south welcomes Maestro Nowak and can’t wait for the next season, let alone the concert hall. Contact him at jpayne@santamariasun.com. Editor Camillia Lanham contributed to this article.