Along time ago in SLO Town there was a trio called Rodriguez, and one member of that trio was named Matt Ward, an introverted guitar whiz with a style all his own. After college, that guitar whiz, like so many of his local musical brethren, pulled up stakes and headed north to Portland, which he still calls home, but something funny happened to this shy guy. He became M. Ward, national indie sensation, who in addition to his solo work is a member of the duo She & Him with actress-musician Zooey Deschanel and a member of Monsters of Folk with Jim James (My Morning Jacket), Conor Oberst, and Mike Mogis (both of Bright Eyes). 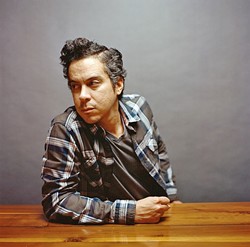 M. Ward plays a Numbskull and Good Medicine Presents show this Tuesday, March 1, at the Fremont Theater (7 p.m.; all ages; $25 presale at Boo Boo Records and ticketfly.com, or $30 at the door), touring in support of his new album, More Rain, set for release on Merge Records on March 4.

Ward recently produced the new Mavis Staples album and has also worked with Cat Powers, Neko Case, Howe Gelb, and Beth Orton among others. He’s clearly “in” with the cool kids!

“I think one of the biggest mysteries of America right now is this: How are we able to process unending bad news on page one and then go about our lives the way the style section portrays us?” Ward asked in press materials. “There must be a place in our brains that allows us to take a bird’s-eye view of humanity, and I think music is good at helping people—myself included—go to that place.”

Should be a good one!

Last time I checked, tickets remain for the Numbskull and Good Medicine John Moreland show at Tap It Brewing Co. this Thursday, Feb. 25 (7:30 p.m.; 21-and-older; $13 presale at ticketfly.com or $15 at the door). I also just found out that Lilly Hiatt will open for Moreland. Hiatt’s breakout album, Royal Blue, garnered good reviews since last year’s release, and American Songwriter calls her ode to father John Hiatt, “Somebody’s Daughter,” one of their “Top 50 Songs of 2015.” PopMatters included Royal Blue in their “Best Americana of 2015” and The Bitter Southerner called the album one of “The Best Southern Albums of 2015.” 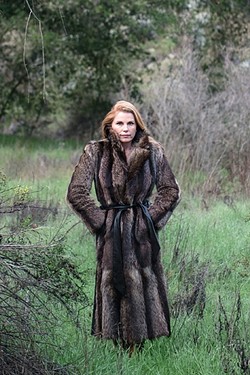 This Friday, Feb. 26, Johnny Cash would have turned 84, and to celebrate, Dunbar Brewing in Santa Margarita has something special in mind—a special beer release and a trio of bands for your listening (or dancing) pleasure.

“I’ll be playing with Jon Bartel and Brenneth Stevens (of The Creston Line),” singer-songwriter Jenny Ashley explained. “The Creston Line will also play, and we’ll finish the night with a set by The Shawn Clark Family Band” (7 p.m.; 21-and-older; free).

Songs like the opening track “Whiskey, Winstons and You” paint forlorn pictures: “I picked up your trail/ On the outskirts of town/ It was long gone cold/ Pale as a wedding gown// So I’ll be in Santa Rosa/ With the bourbon and your smokes/ And I’ll stay until/ The desert eats my bones.”

My favorite track is the simple but hooky “Big Apology,” about a broken relationship and the hollow promises to change. Another track, “Hooks,” is about an inescapable and perhaps toxic romance.

Should be a fun night, and according to Ashley, “Chris Chambers, head brewer and owner of Dunbar, will be releasing a new beer, ‘Johnny Mash: The Beer in Black.’ And each band playing will do a few Johnny Cash covers in his honor.”

I think Johnny would be honored.

Rumor has it that the SLO Blues Society headliner for their show this weekend has just moved to Nipomo, or at least she will when she returns from a tour of France. Deb Ryder has been a blues powerhouse in LA since her family relocated there from Illinois, where her father Allan Swanson—a singer and club owner—had introduced her to the Chicago blues, jazz, and gospel scene. In LA, Ryder lived next to Canned Heat’s Bob Hite and spent time honing her vocal style at Big Joe Turner’s weekly blues nights. Etta James also mentored Ryder, and they share a similar style of big, bluesy vocals. Ryder also frequently performed at the Topanga Corral, owned by her stepfather.

Her debut album Might Just Get Lucky (2014), got some great reviews, and now she’s released Let It Rain (2015), which she continues to tour in support of. Her band includes Alan Maggini on guitar, Larry “Big Horse” David on keyboards and harp, Dave Becker on saxophone, David Kida on drums, and Ric Ryder on bass.

Catalina Eddy and the Blue Keys open, and I’ve been listening to their new CD recorded live at D’Anbino Cellars. They play a great mix of frontman Ted Waterhouse’s originals as well as choice covers. From Delta and Chicago blues to roots, rock, and soul, this is a great live band, and this should be a great show for blues lovers and dancers.

“The idea of this band is to deliver blues-roots-style original tunes mixed with classics that are treated in a fresh, unexpected way: Muddy Waters and Aretha Franklin soul tunes with zydeco accordion, Bob Dylan’s Highway 61 with a riff from Dave Alvin,” Waterhouse said. “I’ve been wanting to do this for quite a while and it’s great to have found the right bunch of players to make it happen. We love to see the way folks have been connecting with this music and it’s great to watch them get up to dance at our shows.”

“The Blues Society runs on volunteers to produce and staff our concerts,” organizers added. “At the shows, volunteers set up, sell tickets and drinks, or clean up after the show. Volunteers get free admission to the show and two drink tickets. If you have extra time and energy to contribute, please call our volunteer line 541-7930 and we will contact you.” 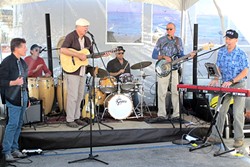 Jim Conroy’s got a voice as deep as a well—both literally and emotionally. On the opening track of The Mystery Brothers’ new CD Get On Board! Live at D’Anbino’s, Conroy’s voice fills up the Michael Jackson classic “I Want You Back” in a way you’ve never heard before.

The recording is a mix of classics like Ehden Abbez’s “Nature Boy” and Curtis Mayfield’s “People Get Ready” and Conroy’s originals, and it’s a great example of The Mystery Brothers’ live experience. 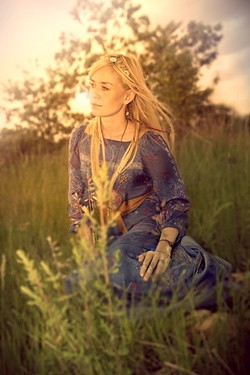 The SLO County Jazz Federation presents NYC-based guitarist Joshua Breakstone in a trio setting on Friday, Feb. 26, in Unity Concert Hall (7:30 p.m.; all ages; $20 general admission, $15 for Jazz Fed members, or $10 for students; at Boo Boo’s or at brownpapertickets.com). Dylan Johnson (bass) and Darrell Voss (drums) round out the trio.

Cholame resident Callie Twisselman appears at the Paso Unveiled Fashion Show Extravaganza, on Saturday, Feb. 27, (7 p.m.; all ages: $35 per person includes the show, entertainment, appetizers, and desserts; available at the Paso Robles YMCA) to benefit the North County YMCA and grow its scholarships and programming to help more families in need pay for pre-school, after school programs, youth sports, and a number of other platforms. Twisselman’s new single, “The Test Drive,” recently broke into the Top 40 Country charts.

Music written by several prominent American composers—Randall Thompson, Kirke Mechem, Morten Lauridsen, Craig Kingsbury, and J. Aaron McDermid, will be featured during the Cal Poly Choirs’ Winter Concert this Saturday, Feb. 27, at the PAC-SLO (8 p.m.; all ages; $12 and $14 for the public, and $9 and $12 for students; call 756-4849). Titled “America … America,” expect musical theater, spirituals, and American classical from PolyPhonics and The University Singers.

Jake Nielsen’s Triple Threat plays Frog and Peach Saturday, Feb. 27 (1- p.m.; 21-and-older; free). Playing blues, funk, reggae, and rock, that band and frontman Jake Nielsen is an inspiration because he struggles with cerebral palsy and has no use of his legs, which doesn’t stop him from being an incredible guitarist and terrific entertainer.

Swedish Americana folk singer Sofia Talvik—a veteran performer with six full length albums as well as numerous EPs, singles, and tours—plays Last Stage West this Tuesday, March 1 (6 p.m.; all ages; 461-1393) in support of her newest, Big Sky Country. The Telegraph recently selected the record as one of the best Country/Americana albums of the year. Think Joni Mitchell and Judy Collins.