Fossil Wine Bar is located at 5992 Entrada Ave. in Atascadero. You can belly up to the concrete bar on Friday and Saturday from 3 to 11 p.m. and Sunday, Monday, and Thursday from 3 to 9 p.m.

"People who say they don't like wine—they're dead to me," the Goddess of Wine announced to 10 students gathered in Atascadero's Fossil Wine Bar on a recent Monday night.

It's a bold statement to make. But I get it. 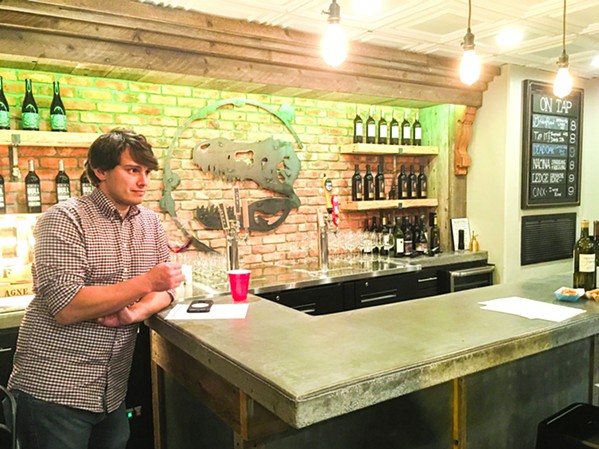 Later in the evening, Denise Lowe asked the group who didn't like chardonnay. As two hands went up and several heads nodded, my brain quietly said, "Me." It's all that butter. My mouth can't hang. I want to scrape it off my tongue, try to put it back in the bottle, and then ask the world for that few minutes of my life back.

"There's a lot of wine out there for you to taste. Why would you limit yourself? You just might not like the style of what you've tasted," Lowe said, pointing to the two wines before the Wine 101 students.

One was a "new world" chardonnay from Kíta Wines in Santa Barbara County, the other was an "old world" Chablis from Domaine Long-Depaquit in France—also a chardonnay, but named for the specific region.

"When we talk about old world wines, we talk about region," Lowe said. "Unlike here, where we can grow whatever the hell we want, the French have rules."

Rules or not, neither the old world nor the new world wine was over-oaked or over-buttered. The ladies who volunteered their dislike for chardonnay did indeed change their tune. I'll admit, I have had chardonnays that I actually like. They may be few and far between, but they're out there.

Fossil Wine Bar owner Paul Zuniga said when someone comes in and tells him they don't like wine, oftentimes he will eventually find a white, red, or pink they can (and want to) drink. 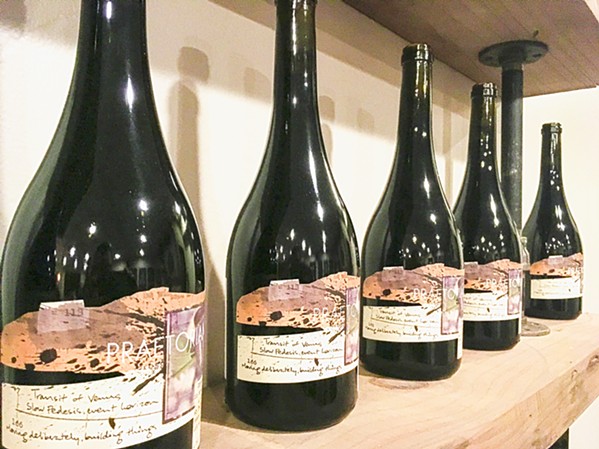 "Something I enjoy a lot is hospitality and service and helping people find wines that work for them," Zuniga said. "It's like putting a puzzle together."

The bar that he owns with his wife, Anita, opened in November 2018, is stocked with Central Coast wines from Paso Robles to Santa Barbara—plus, international and other California wines, as well. The shelves are stacked with bottle after bottle of LXV, ONX, Dilecta, Kíta, Keush, and more.

Succulents cascade out of rounded metal planters against a rustic wood wall—a cozy corner tucked between gray velour couches. Wood-topped tables face the brick-backed bar with a giant metal cutout of Fossil's logo, the head of a T-Rex encircled by drippings off a wine glass. Zuniga admitted he's definitely a dinosaur guy and has been since he was a kid. Also, the vines around these parts grow in calcareous soil and limestone, which is full of fossils, he added. 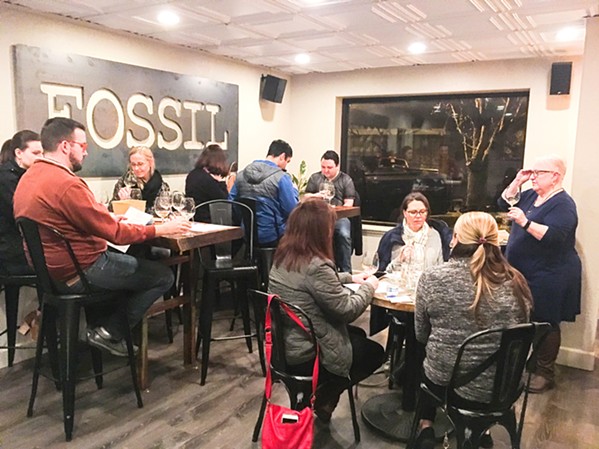 Windows face Entrada Avenue, a downtown street that has changed a lot in the last several months. Pho 4 U opened across the road and LaDonna's Restaurant opened next door, joining Dead Oak Brewing Company and Dark Nectar Coffee. The Nautical Cowboy opened in the Carlton Hotel on El Camino Real not too long ago, and a new spot, The Colony Market and Deli, is under construction in an old gas station across the street from the hotel.

Fossil is downtown A-Town's second wine bar. The first is Grape Encounters Wine EmPOURium on Traffic Way. Zuniga said the family (the Zunigas have a 2 1/2-year-old son) moved to Atascadero from Paso Robles about a year ago and wanted to open up a business in the town they lived in.

"We wanted to stay local to our town if we could help it," Zuniga said. "We would have been just a drop in the bucket in Paso."

Zuniga used to manage LXV Wine's tasting room in downtown Paso. He also worked at Sextant Wines and Aron Hill Vineyards, dabbled in winemaking (creating what he laughingly called "unpalatable" wine), and helped out at Wine Boss Lounge before he decided to strike out on his own a little farther south.

"I would never have guessed if we took my life 10 years ago," Zuniga said. "Doing anything wine-related is the last thing I would have thought about doing for a career."

Ten years ago, he was working for the Transportation Security Administration in Santa Barbara, screening baggage and eventually becoming a behavior detection officer at the airport. But when he and Anita moved from Santa Barbara up to North SLO County, their lives changed.

The cost of living was lower, giving Zuniga the ability to try industries he might not have been able to if they had stayed in Santa Barbara. Anita kept her job at a Santa Barbara-based software company called Yardi Systems Inc., where she gets to work remotely, and Zuniga was drawn into North County's biggest industry.

"I've fallen in love with it—even though everyone's in competition and trying to make the next great bottle of wine, it doesn't feel like it," Zuniga said. "It sort of feels like an extended wine family."

However, he said, there's only so far you can move up at a boutique, family-owned winery. The next step for his second career was either to move over to a bigger, corporate operation or start a new wine label. Then, he worked with Thomas Booth at the Wine Boss, which inspired him to think a little bit differently. Curating a wine list and interacting with customers in his very own wine bar turned out to be exactly what he wanted to do.

"I taste almost everything that I have on the menu," Zuniga said, adding that he has boutique, garagiste, Central Coast wines and brews (on tap). "My job is to make sure we have a nice wine list."

Zuniga stood at the bar with a 1-ounce taster of Dragonette sauvignon blanc in his glass, swirling it and listening to the Wine Goddess as she spoke about taste receptors on your tongue and in your nose. Lowe said this class is all about overcoming the mysteries of wine.

"Stick your nose deep in the wine and take a big sniff ... . What do you smell?" Lowe asked.

"Wine!" was the overwhelming response. Δ