Four Beatles walk into a bar ...

The SLO Down Pub offers music and bubbly on Valentine's Day 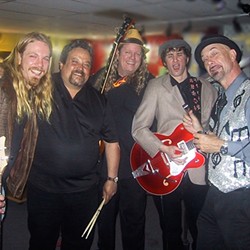 Between them, the four men who made up the musical group the Beatles tallied a robust eight marriages, four divorces, and numerous infidelities, but for multiple generations of Americans they will always be the gurus of love. Which is why Arroyo Grande’s SLO Down Pub is hosting a musical tribute to the fabulous four—featuring local musicians and the pub’s own house band, the Jim Townsend Blues Band—
on Valentine’s Day.

“They were the preachers of love,” said Townsend, a music instructor and pianist who was responsible for mobilizing the evening’s talent. “And they were tremendous songwriters. Of all the bands that came out of the’60s they had to be the best songwriting team.”

Townsend’s band performs at the pub every Thursday evening, in addition to participating in Tuesday night blues jams at the venue. But rather than appropriating all the Beatles’ music for himself, Townsend is searching for other local musicians, duos, and groups to perform a few of their favorites, ranging from the acoustic to the electric. Townsend theorizes that just about every musical group has at least a few Beatles’ songs in its repertoire, and the miniature Beatles fest is the perfect opportunity to play said songs for an audience that will truly appreciate them.

With a set list that includes “Here Comes the Sun,” “Come Together,” “All My Lovin’,” “I Wanna Hold Your Hand,” and, of course, “All You Need Is Love,” among dozens of others, the evening will be rife with nostalgia and romance. Townsend even dedicated a segment on his website (screamingjimmy.com) to the performance, allowing guests to place requests for songs they would like to hear. Several of these, along with such classics as “Yellow Submarine,” “Twist and Shout,” and “She Loves You Yeah Yeah Yeah,” will be included in an audience sing-along.

(Paul and Ringo were issued an invitation, but have not yet replied as to whether they will attend.)

The space where the Beatles madness is scheduled to go down is right off bustling Grand Avenue, but recessed into an easily overlooked parking lot. The pub opened a year ago in December, marketing itself to the 35 and older crowd. The space closes early by pub standards—10 or 11 p.m., depending on the evening, and Mark London, one of four owners, insists that despite the fact that wine and beer are sold there, it is not a space in which to get drunk.

In fact, the pub, which began its life as a lumber barn 75 years ago, now more closely resembles a wine tasting room or art gallery, with lamps and wall sculptures among other consignment works from local artists. Almost all of the products and furniture place an emphasis on recycling, right down to the bar, which was crafted from a fallen tree. It seems appropriate, therefore, for the pub to serve as a fount of recycled music, perhaps one of the few industries where the old and new receive equal standing. Though it’s not licensed for any actual food preparation, the pub serves Cal Poly cheeses, and Julie will be serving desserts free of charge during the Valentine’s Day concert. The only feature that bespeaks the hint of shabbiness the term “pub” seems to imply is an unfinished expanse of floor. But even that is eclipsed by the determinedly upscale atmosphere.

Near the diminutive stage sits a 90-year-old grand piano, which Townsend is quick to point out. The venue is also equipped with a dance floor, though there are no markers to distinguish designated dancing space. Though pub capacity normally rests at 50, that number is expected to double for the Beatles tribute. And the bubbly will be flowing, in the form of champagne, wine, and beer for Beatles fans who like imbibing.

But, of course, the real star of the evening, around which all other bodies revolve, is the music. Townsend’s band is scheduled to perform “Lady Madonna,” “Back in the USSR,” and other examples of what Townsend calls the Beatles’ “more rockin’ songs.” And the blues band will be joined by the Circle Spirit Band, Bill Bradfield and Friends, Dave Stimpson and John Letham, and Bruce Krupknik and Friends, among others. A ukulele player will be handy to play during the sing-along, as will a cellist to perform “Eleanor Rigby” and some of the quieter melodies.

Should the event prove to be a hit, the pub may make a tradition of hosting musical tributes. But for one night at least, the Beatles flame will burn bright, rocking the middle-aged audience into the not-so-wee hours of the night, sustained by love, music, and champagne.