Cancer sucks. It robs vital, wonderful people of their energy and their future. It takes family members and friends from those who love them. It has hit close to home for me recently. Someone very close to me just discontinued chemotherapy because it wasn’t working. The tumors actually got bigger, not smaller. He’s not alone, and neither am I. 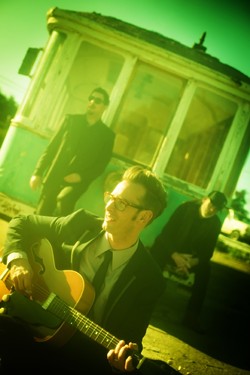 About 13.7 million Americans with a history of cancer were alive on Jan. 1, 2012. About 1.7 million new cancers are expected to be diagnosed in 2014. About 585,720 Americans will die this year. In fact, we lose 1,600 people a day to the disease; it accounts for nearly one in four deaths annually. We probably all know someone whose life has been touched by cancer. It feels inescapable, overwhelming, and unstoppable.

That doesn’t mean we give up.

Next Thursday, Oct. 23, at the Fremont Theater, the Central Coast Bioneers and Festival After Dark present an All-Star Benefit Concert to SLO Down Cancer, which will benefit the SLO Noor Clinic for free cancer screenings for SLO County residents (7 p.m.; $20 presale at slonoorfoundation.org, centralcoastbioneers.org, festivalafterdark.com, and Boo Boo Records; $25 at the door; or $35 for VIP tickets that include reserve seating, a 6 to 6:45 p.m. pre-party with appetizers and beverages, band meet-and-greet, and photo ops).

It promises to be a great line-up. Performers include Proxíma Parada, which won first and second place in the R&B/Blues category of the 2014 New Times Music Awards, as well as Best Live Performance. These four Cal Poly graduates write literate, hooky songs delivered with plenty of charisma and energy.

Shadowlands, which won the Open category of the 2014 New Times Music Awards, is also on the bill. This quartet plays ethereal, haunting folk music filled with keys, guitar, and cello. With three fantastic songwriters, beautiful harmony vocals, and a lot of sonic texture, they’re spellbinding to see live.

And then there’s violinist, Patrick Contreras, who’s taken the instrument to places it’s never been before—mixing blues, electronic dance music, hip-hop, and more as he delivers original music as well as interpretations of Jimi Hendrix, Led Zeppelin, and Carlos Santana.

This promises to be a great concert for a great cause. Raising awareness, getting screened for cancer, diagnosing as soon as possible, and starting treatment right away won’t save everyone, but it will save some, and every cancer survivors knows it’s a battle worth fighting.

Brew me a river …

In case you didn’t see the news piece earlier in the paper, SLO Brew as we know it will be dead by summer, and that fancy new SLO Brew with a pub and restaurant downstairs, a second floor nightclub, and rooftop dining? Also dead.

Instead, according to developer Hamish Marshall (the current legal owner of SLO Brew), the club will move to the new location on Higuera Street in a smaller-than-originally-conceived iteration. The point being, get some SLO Brew action while you can because the days are numbered for the SLO Brew that was lovingly developed by Todd and Korie Newman over the last almost-decade.

Todd and Korie are venturing off into a new music production company called Good Medicine, with two upcoming shows at the Fremont Theater: Michael Franti on Saturday, Nov. 8, and Ziggy Marley on Monday, Nov 10. More info on those shows to come. In the meantime, Todd will continue to facilitate the music at SLO Brew until it moves next summer. 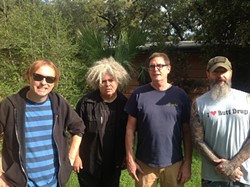 On Tuesday, Oct. 21, you can try to bum rush the door for the Champagne Showers Tour with Cherub, Ghost Beach, and Gibbz, but SLO Brew’s website says this one’s sold out!

The really big show this week, in my opinion, is The Melvins, the early-’80s punk metal band influenced by Black Flag, Kiss, and Alice Cooper playing Wednesday, Oct. 22 (7 p.m.; all ages; $15 presale or $17 at the door). Fronted by Buzz Osborne (aka King Buzzo), the band defies categorization, and their slower material is often cited as the progenitor to grunge music (they formed in Washington state, after all). This show is also notable because it will be opened by the feral, ferocious, and fantastic Le Butcherettes, a brilliant garage punk trio fronted by Teri Gender Bender. Gonna be awesome! 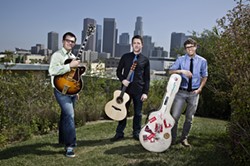 Fernando (aka Fernando Viciconte), a Portland-based troubadour with 20 years of local and national acclaim, recently recovered from throat surgery and is back in action! He plays at Frog and Peach this Thursday, Oct. 16, and the Libertine Pub on Saturday, Oct. 18.

“Fernando is pretty much a badass,” my friend Patrick Hayes told me. “I met him when he toured through a few months ago with my buddy Mike D, and immediately after his first set I asked him to make sure we booked his full band ASAP. He’s now touring behind a new album that’s coming out soon, featuring Peter Buck from REM and a bunch of guys that have played with Elliott Smith and M. Ward.”

LA-based jazz/folk duo The Singer and The Songwriter play Linnaea’s Café this Friday, Oct. 17 (8 p.m.; free; all ages). “We’re embarking on our very first West Coast tour to promote our debut album, What a Difference a Melody Makes,” the duo said. Their album debuted on the CMJ Top 40 Jazz Chart at No. 34! Expect vintage, jazz-infused folk.

This Friday, Oct. 17, Peter Mulvey plays Shell Café (8 p.m.; all ages; $10) to promote his new album Silver Ladder. Funded by Kickstarter, produced by Chuck Prophet, and recorded in LA with a roomful of top-notch players, Mulvey calls the album “the best thing I’ve ever made.”

The Cliffnotes, featuring Valerie Johnson and Al B Blue, play Rockin’ the Vines for Paso Robles Harvest Fest Weekend at Paso’s Poalillo Vineyards this Saturday, Oct. 18 (6:30 p.m.; $20 includes your first glass of wine and dessert; call 238-0621 for tickets). Purveyors of swamp and boogie blues-rock, these cats know how to party!

“Kerry Patrick Clark is a musical Norman Rockwell,” according to press info. “His palette is a simple 12-note scale, a six-string guitar, and one voice that sings of hope within the human experience.”

Rock act Chronic Vitality plays Frog and Peach this Saturday, Oct. 18. With piano, organ, and sax, this is more than your average rock band (10 p.m.). 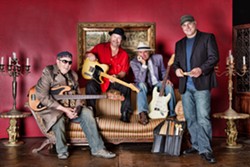 Dallas-based Americana artist Madison King plays Frog and Peach this Sunday, Oct. 19, in support of his sophomore album Onward & Upward. “This has been a time of growth and dating and getting my heart broken and picking up the pieces and reflecting on what I’ve learned along the way,” the 26-year-old singer-songwriter said in press materials. Got a broken heart? Go commiserate! He’ll also play Molly Pitchers on Monday, Oct. 20.

Oakland-based Thee Hobo Gobbbelins recently released Oddities and Entities, and they’ll roll into The Porch in Santa Margarita this Wednesday, Oct. 22, to promote it (8 p.m.; all ages). Just in time for All Hallows Eve, the record contains “spooktacular tales of otherworldly terror” as the band “melds high-energy Americana and spooky gypsy punk with weird tales of might, magic, and monsters.”