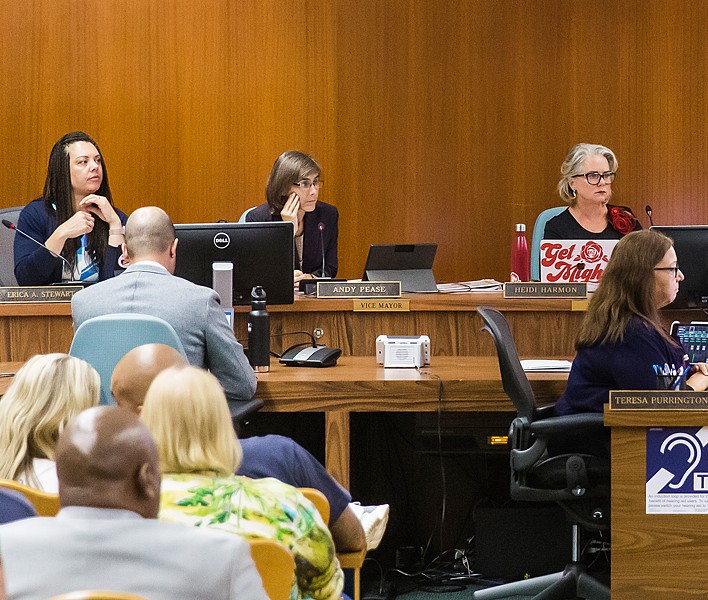 The SoCalGas workers' union accused Vice Mayor Andy Pease—who participated in the council's 4-1 vote on Sept. 3 to adopt a first reading of the code—of voting with a conflict of interest, since she owns a local architectural consulting firm that works on projects in the city.

In the wake of the accusation from the Utility Workers' Union of America Local 132, the city postponed a final vote on the code and asked the FPPC for its advice on the matter. But soon after that, on Oct. 3, the union filed a FPPC complaint against Pease, which the agency has since opted to take up for a formal investigation.

"We are hoping that the FPPC will appreciate the significance of its timely consideration for our community," SLO City Attorney Christine Dietrick told New Times via email, "and move forward as expeditiously as possible, while completing a thorough analysis ... of the programs proposed and their application to the development community as a whole."

The union's complaint against Pease alleges that the code—which disincentivizes natural gas infrastructure in new buildings—would "require professional services of exactly the kind provided by Ms. Pease and her firm," in violation of the Political Reform Act.

It claims that Pease's vote should not only disqualify her from future participation, but the entire council from "deliberating or voting on the matter in the future."

In contrast, Dietrick's request for advice from the FPPC asserts that the new building code would "apply uniformly to all covered construction projects" and does "not impose any requirements directly on architects or other design professionals."

Pease, in her own statement to the FPPC, referred to Dietrick's arguments and said she didn't believe she had a conflict in the matter.

"SLO is one of approximately 50 California cities that are in the process of encouraging electrification of new buildings," Pease wrote to the FPPC. "Not surprisingly, the oil and gas industry is pushing back on this inevitable trend."

Dietrick told New Times that the City Council has not discussed the possibility of taking a vote on the code without Pease—but that it's not out of the question.

"That could change with majority council direction," Dietrick said.