A conga line marched a box of voter signatures into the San Luis Obispo County Clerk-Recorder's Office on May 1.

After almost nine weeks of work, the Coalition to Protect San Luis Obispo County had collected more than 20,000 signatures on its initiative to ban fracking and new oil wells in the county—but allow current oil operations to continue as they are. 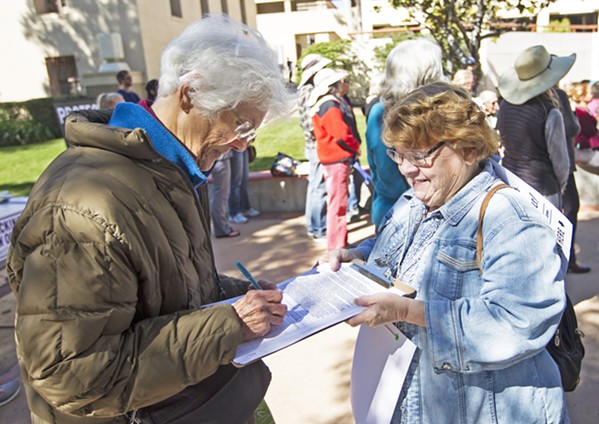 "We used the opportunity to celebrate a little camaraderie," Coalition Coordinator Doug Timewell said. "I think we could have done a lot more. You know we got a late start because we wanted to make sure the wording of the initiative was perfect."

Timewell said the campaign really built momentum over time, starting small and ending with more than 320 volunteers collecting signatures. To qualify for the November ballot, the clerk-recorder's office needs to verify that at least 8,500 of those (or 10 percent of the more than 85,000 residents who voted in the 2014 governor's race) signatures are from eligible SLO County residents.

"The next step in the campaign is really education," Timewell said, adding that it will focus on some of the issues that exist in the Arroyo Grande oil field. "The biggest issue is the projected growth and the expansion into hundreds of more acres for their reinjection wells outside of their existing aquifer."

The oil field's current operator, Sentinel Peak Resources, inherited an application that Freeport McMoRan (its past operator) had filed with the Environmental Protection Agency that would enable it to continue current operations and drill the remaining 31 oil wells of a 95-well project approved in 2005. In 2014, the California Department of Conservation discovered that between 70 and 80 of Freeport's reinjection wells (as well as 50,000 other wells in the state) were injecting wastewater from oil operations into a portion of the aquifer that wasn't exempt from the Clean Water Act.

Sentinel Peak Resources spokesperson Christine Halley said the company is awaiting the EPA's decision on whether to exempt that portion of the aquifer from the Clean Water Act. She added that the oil company doesn't have current plans to pursue the next phase of drilling that Freeport McMoRan had proposed to the county—450 new oil wells, 100 of which would have been replacement wells.

"That is not an active application right now," Halley said. "To frame this as if there's some application for hundreds of wells circulating with the county, is not true."

Halley said that if the initiative were to pass in November, the way it's worded would affect the oil field's current operations. Over an oil well's natural life span, the production declines over time, and in order for an oil field to continue producing, those wells need to be replaced, she said.