Fracking's back: A Santa Barbara report brings the controversial practice to the fore 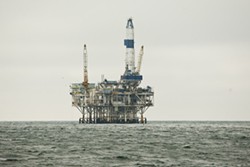 A recent offshore discovery in the Santa Barbara Channel might help salvage the failed drive to tighten California’s laws on hydraulic fracturing, also known as fracking.

Fracking involves pumping large amounts of water, sand, and chemicals into oil wells to loosen deposits segregated by walls of rock. The legislative session began with a swell of bills aiming to regulate and even ban the controversial oil exploration practice in California. However, the powerful Western States Petroleum Association succeeded in defeating all but one fracking bill before the summer recess.

After several quiet months, the fracking issue received some unexpected attention with the publication of a July 25 report from indy media website Truthout.org, which revealed offshore operators fracked wells in the Santa Barbara Channel more than a dozen times since the 1990s.

“It has recently come to our attention that hydraulic fracturing is taking place off of the California coast, and in particular, off Santa Barbara County’s pristine coastline,” Jackson wrote. “This revelation is a cause for great concern.”

SB 4 would require oil operators to publicly disclose the location of fracked wells, specify the amount of water pumped into them, and identify the chemicals used in the process.

Several environmental groups that backed the former bills to stop fracking in California have criticized SB 4 as too weak. Pavley referred to the Santa Barbara report during an  Aug. 12 talking heads show as proof that California needs tighter regulations now.

“Hydraulic fracturing is already occurring,” Pavley said. “It’s already happening off the coast and on land.”

Pavley’s office declined to speculate whether the news would help SB 4 through a bill bottleneck reportedly caused by an unusual abundance of freshman lawmakers. One staff member told New Times the bill should get an Appropriations Committee hearing sometime this month.