A political triumvirate of artists takes over the Steynberg Gallery

Mark Bryan’s satirical paintings occupy their customary space in the Steynberg Gallery’s primary room. And Dennis Larkins’ apocalyptic images, located in the third and final gallery room in the back, are no strangers to the Monterey Street gallery. But Donald Archer’s renderings of Frankenstein’s monster—labeled corporate America—along with army tanks and automobiles wreaking havoc across America’s moral, cultural, and physical scapes, is a first for SLO’s preeminent art gallery. In fact, the paintings, on display through the end of February, are a major departure for the artist himself.

“What’s wrong with this picture,” asks one title, depicting an endless parade of cars, bumper to bumper against a backdrop of oilrigs. Sparing no subtlety, Archer’s canvases are dominated by golden arches meeting to form that iconic “M;” scrawled with explanatory text referencing “torture,” “liberty,” “corruption,” and “privatization”; even Lady Liberty, broken and sinking into a dark abyss labeled “black water.” The purpose, according to Archer, is not to lambast a particular party, but to provide critical comment about politics in general, economics, and society. 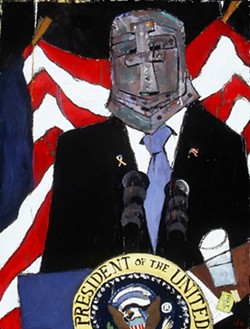 Archer painted an estimated 30 paintings between September and November of 2007, his first and last political paintings in his 40-year career as an artist.

“They were done out of passion, a sense of frustration,” he explained. “Long before this current crisis I saw things coming. It was like watching a house slowly slide off a cliff and there was nothing you could do about it.”

It all started with a plastic fence. A nearby neighbor erected the barrier, representing—to Archer, at least—gated communities across the nation, neighbors barricading themselves from one another, from community, and from vulnerability and responsibility. The plastic fence was everything that was wrong with the country, prompting Archer to furiously explore this topic in paint.

To do this he would rely upon new tools of expression, such as the graffiti-like words and sentences that lend his paintings an impression of grittiness. His hope is that the text will allow him to reach newer, younger, audiences with his work.

“George [Bush] inspired this,” said Steynberg, gesturing to the paintings on the walls. “Now he’s gone. Now we can smile. Now we can do light-hearted.”

During the month of March, light-hearted means an exhibit of Archer’s non-political works, landscapes of abstracted coastlines and highways, which transitioned into people and cityscapes when Archer took a train ride across the country to visit Manhattan. Suddenly, his work became figurative, and he began to think of his paintings as movies, himself and the people who dominated his new work the actors. Painting people in New York made sense, Archer argued, because there was nothing but people. The metropolis also inspired the introduction, or more frequent use, at least, of a new color: black. The color just seemed to flow from the canvas, and Archer was enamored with the drama that it added to his work.

He describes his work as painterly, and has no interest in producing an image that resembles a photograph. And though his painting methods might vary slightly from one genre to another, he channels his style into many different directions: figurative, abstract, and representative among them. The March-long exhibit, From Big Sur to Manhattan, will provide an opportunity for Archer to show a little from each style.

“The political paintings were a kind of fence post along the trail and they reflect everything that’s gone on before up to this point. Painting has many more possibilities than simply creating a picture of a beautiful landscape,” he argued. “I don’t want to be typecast.”

In the last four decades, Archer has somehow managed to support himself with his art. He and his wife, also an artist, travel the West Coast attending outdoor art festivals. This lifestyle wasn’t a choice as much as a matter of fact; Archer regards painting as his calling, a pursuit and passion perfectly suited to his temperament, and a destiny not subject to his individual will. Because of this, he chooses his subject matter carefully.

Archer compares his political paintings to the blues—depressing subject matter that somehow leaves the viewer feeling better after seeing, or hearing, it. For him, paintings aren’t simply furnishings to hang above the sofa; they are tools of social change. Which isn’t to suggest that he doesn’t also want them to be entertaining; Archer strives to incorporate humor in his paintings in much the same way that Mary Poppins recommended chasing a dose of medicine with a spoonful of sugar.

“One of the things that people say sometimes when they hear that you’re a painter or a musician or an actor, they’ll say, ‘Oh, that’s fun,’ kind of like you do it because you get a kick out of it,” concluded Archer. “Painting’s as hard as anything I’ve ever done. But, just like this political show I’m doing, I can bring in my entire personality—my frustrations, my intellect.”

Arts Editor Ashley Schwellenbach once rode a train from Neverland to Timbuktu. Send tickets to Candy Land to aschwellenbach@newtimesslo.com.