The countyâ€™s school districts vowed to catch employees who were ripping off big bucks. What they ended up with was a big headache.

Amid the celebration of her October 2003 wedding and the joyous reception for family and friends, Klare Richardson-Tunnell barely noticed the smiling guest with the video camera busily recording the dayâ€™s events. His, after all, was only one of numerous cameras at work. So of course the bride had no way of knowing that the man in reality had crashed the party, or that he would later equip his camera with a powerful telephoto lens to watch as she and her new husband departed for their Cambria honeymoon, and later as she sunbathed on their private balcony.

#
Â Richardson-Tunnell, 49 and a former Lucia Mar schoolteacher, was the blissfully unknowing subject of a â€œsub-rosa,â€? which is investigator lingo for secret surveillance. The uninvited â€œguestâ€? was Anthony Raymond Esparza, who at the time was operating Eye-Con Investigation and Consultants, Inc, a Pismo Beach private investigation firm. Esparza, a self-professed born-again Christian with a cocaine-peddling conviction in his past, was working on behalf of a coalition of ten San Luis Obispo County school districts trying to catch employees who they thought might be defrauding the schoolsâ€™ Workers Compensation funds by collecting benefits for debilitating work-related injuries but in fact were healthy.

Â Richardson-Tunnell was one of those under suspicion. The 20-year classroom veteran had endured two back surgeries for what she says were work-related injuries. Up to now none of her workers compensation payments has been denied, nor did the now-moribund probe into her activities reveal any wrongdoing. â€œDo you know anyone who would go through two back surgeries if they were faking?â€? asks her San Luis Obispo-based lawyer, Daniel Oâ€™Neill. â€œThe school districts were fully aware of what was going on [with Esparza] because they paid the bills. He did not pull anything over their eyes.â€?Â

Â Richardson-Tunnell has since filed suit for invasion of privacyâ€”one of three pending lawsuits resulting from misdirected attempts to stamp out workersâ€™ comp fraud in the school districts. A second suit has resulted from the acrimonious termination in early 2004 of a 13-year relationship between the school coalition and its program supervisor, Workers Compensation Administrators (WCA) of Santa Maria. The third: the schools coalition filed its own suit late last year against Esparza, claiming he used unlawful surveillance methods.

To top it all off, the situation has spawned accusations of spies spying on spies. Undercover surveillance is often employed in workers comp cases, and when employed properly it can provide evidence of fraud and result in savings for employers, in this case the school districts. But when the surveillance is not properly and lawfully conducted, or is used against the wrong subject, serious problems can arise, and other legitimate investigations may be compromised (see box â€œSurveillence Lawâ€?).

County school districts self-insure themselves through an entity known as Schools Insurance Program for Employees (SIPE), a joint-powers public agency. Its board vowed several years ago to stem workersâ€™ comp fraud (New Times, â€œLiving Easy,â€? August 28, 2003). Board members were upset by apparently fraudulent claims the districts were paying and also about a lack of deterrence to cheaters. Mike McGuire, SIPEâ€™s manager of health and safety, was chosen to head up the fraud investigation. SIPE, however, had not hired Esparza directly, but did so through the WCA.

#
Â WCA, founded by Linda Larkins and her husband Bruce White, had been under contract with SIPE since 1991, handling worker claims, making payments and pursuing fraud. The company had two major accounts: Larkins administered fund matters for the SLO County school agency while her husband managed a similar program for Santa Barbara County. Since starting their relationship with the school districts, the two have been paid a total of $1.7 million in fees, some $680,000 of that coming from San Luis Obispo. That amount was for administrative services only and did not included payments to injured workers. In turn, from 1999-2004, WCA paid nearly a quarter-million dollarsâ€”the majority of SIPEâ€™s undercover investigation fundâ€”to Esparza.

Â Esparzaâ€™s metamorphosis into a private eye took a somewhat circuitous route, blossoming from a background that included a 1989 Orange County cocaine bust and conviction for which he served 270 days in jail, with three yearsâ€™ formal probation. Upon his release, Esparza was allowed by anÂ  Orange County judge to change his guilty plea to one of not guilty, and the charge was dismissed. Esparza says now heâ€™s not sure how that happened: â€œIt was just part of the deal, I guess.â€?

Â Â When he applied for his state-issued private investigator license, Esparza says, he â€œcertainlyâ€? informed officials of his criminal past. Following his Orange County escapades, he lived briefly in Mt. Shasta, which is where he says he found Jesus. After working for a Santa Barbara private investigation firm for six years, Esparza founded Eye-Con in 1999. His relationship with SIPE/WCA, who were among his best clients, began that year. School district records show that until he was terminated in 2004, he had pulled in more than $225,000 from SIPE. Divorce documents filed November 2004 in San Luis Obispo Superior Court by his former wife, Teresa, showed Esparzaâ€™s was a lucrative small business operation. In 2002 the one-man company showed gross receipts of $347,086. The following year Esparza reported gross income of $237,803.â€?

Â Esparza insists his surveillance methods are proper and legal. â€œIâ€™m very clear on the privacy laws,â€? he says. If my investigative methods are inappropriate then [so are those of] every other investigator in the country, because the methods they employ are no different.â€? Esparza calls his work for SIPE exemplary and complains, â€œThey [SIPE] never contacted me directly to question my methods. I am surely the scapegoat in this. In the end I will be vindicated, and the people who matter will learn that I have done nothing wrong.â€?

Esparzaâ€™s surveillance efforts may have been zealously misguided in the case of Klare Richardson-Tunnell, but they had already compromised a keynote prosecution in the schoolsâ€™ battle to reduce fraud, that of Clifford Lively, a Paso Robles school employee who claimed that working as a janitor had permanently injured his back over the years and that he â€œcouldnâ€™t lift cotton balls.â€? Esparza videotaped Lively lifting bales of hay and sacks of concrete. Lively, then 60, had been charged with two felonies alleging false claims of $140,000 in less than a year. Other upcoming cases also could be adversely affected. As a direct result, McGuire says that sub-rosa investigation methods â€œhave been scaled back tremendously.â€?

#
Â â€œThis has been a learning experience for all of us,â€? admits McGuire. â€œInvestigation [of claims] is prudent, but to take the extra step, of sub-rosaâ€”well, that will be used on a very limited basis from now on. We must have reasonable suspicion that there is a basis for the surveillance.â€?

Â McGuire believes â€œbasic investigationâ€? at the outset of claims is the answer to fraud. â€œWord gets around that we have become very proactive,â€? he says, adding that in the last year some employees have withdrawn claims because â€œthey realized they would be under greater scrutiny.â€? Annual school district workersâ€™ compensation payouts have averaged three to four million dollars annually since 2000, he says, but during the past year that amount barely reached two million.

Â Indeed, until recently any real threat posed to scammers was slight. From 1993 to 2000, 79 cases of suspected workersâ€™ compensation fraud were turned over to the San Luis Obispo County District Attorney for prosecution, resulting in only 10 convictions. But during the following three years (i.e., when Esparza was most active) 29 cases were developed and presented to D.A. Gerald Shea. Citing â€œlack of evidence,â€? Sheaâ€™s office did not deem any of those worthy of prosecution. SIPE members worried aloud that they were inadvertently assisting in a giveaway of tens of thousands of dollars in public funds.

Â One of McGuireâ€™s first actions as chief fraud buster, in late 2003, was to put Larkins and WCA on notice about his unhappiness with their efforts to curb illegitimate claims, since SIPE personnel had raised questions about both the legality of Esparzaâ€™s sub-rosa methods, and his qualifications to be doing the surveillance in the first place.

McGuire stated in a September 11, 2003, e-mail to Larkins, copies of which are included in court records: â€œI am very disappointed in your adversarial attitude regarding the fraud investigation.â€?

Â A month later McGuire wrote to Larkins demanding â€œa real rÂ»sumÂ» from Tony. . .When we go to court on this fraud with [Clifford] Lively, it would be a little embarrassing to indicate Tonyâ€™s qualifications are that he â€˜has been blessed.â€™ If he doesnâ€™t know what a rÂ»sumÂ» looks like, there are thousands of examples on the Internet.â€? Esparza would provide a rÂ»sumÂ», but his credentials to function as an expert witness in prosecutions, says McGuire, had already been compromised. 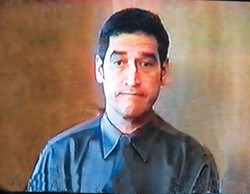 #
Â Questions about Esparzaâ€™s surveillance practices were exacerbated by an incident in December 2003, in which another subject of a sub-rosa complained of being followed by Esparza wielding a video camera. McGuire was particularly unhappy, according to memoranda he sent to Larkins, because Esparza was not supposed to be working that particular case.

Â Then McGuire began to suspect that Esparza was tailing him. In a December 10 memo to McGuire, Larkins assured McGuire he was mistaken: â€œI asked [Esparza] if he was following you and he adamantly denied it.â€? While nothing would come of the spy-on-spy controversy, the incident had bigger implications: It was the first time McGuire realized Esparza had other investigators working for him. â€œWe thought [Esparza] was the guy shooting all the video,â€? McGuire wrote to Larkins a day later. This was an important matter, McGuire noted, because of possible discrepancies in testimony during future prosecutions.

Â A week later, Larkins informed Esparza that he was to â€œstop all existing workâ€? on SIPE claims, while SIPEâ€™s board president wrote to Larkins: â€œEye-Con Investigations is never to be used. There are huge concerns centering on Eye-Con and Esparza. We donâ€™t want to step out of the frying pan into the fire.â€? Esparza angrily wrote back: â€œI challenge their claim! All I can say is they better have the right Tony Esparza. . . This is an outrage!â€? The following day Esparza elaborated in another message: â€œI have nothing to hide. I am a religious man with my focus always on God.â€? It was shortly afterward that the contract with Larkins-White was terminated.

Â As the Richardson-Tunnell invasion-of-privacy suit, and SIPE v. Eye-Con and WCA v. SIPE all await their days in court, Judge Michael Duffy in a rare move this past June. declined to grant a preliminary hearing to prosecutors in the Clifford Lively fraud prosecution because of â€œa lack of evidence.â€? Central to Duffyâ€™s concerns were unanswered questions about the origin of Esparzaâ€™s clandestine videotape.

Further investigation has occurred and new proceedings are pending.
Â SIPE has recorded $2 million in savings in total claims payouts since parting with WCA, says McGuire. To each school district, that represents a significant 19-percent savings in annual premiums. â€œLitigation is being reduced,â€? McGuire notes. â€œWe are getting the lawyers out of the equation. Instead of an antagonistic approach, we are working more with claimants and getting more aggressive with fraud. But we have found that sub-rosa investigations can be very, very expensive.â€? âˆ†

Dan Blackburn can be reached at
djblackburn@charter.net