'Freaky Friday' at PCPA is the perfect comedy romp for families

Freak is on fleek

It dawned on me about halfway through the first act of the Pacific Conservatory Theatre (PCPA) production of Freaky Friday that the company was doing something I'd never really had a chance to see in a theater before—they were entertaining kids. 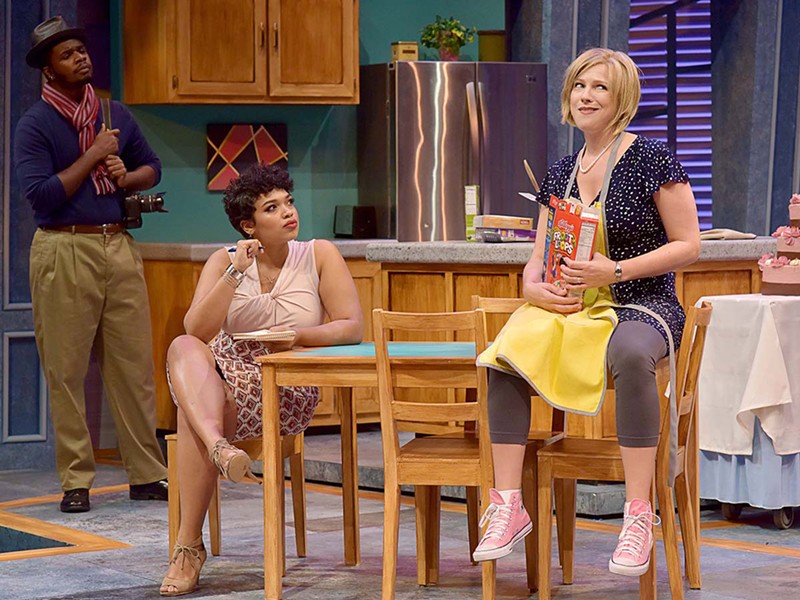 I have seen about a year or so's worth of PCPA performances and managed to miss the more family-friendly fare in the past, so when I realized that my fellow audience members were skewing a bit younger, it took me off guard. But then I understood why. Freaky Friday, the show which kicked off PCPA's 54th season, is based on not one but two of the most beloved movies in Disney film history (it was originally a book written in 1972 by Mary Rodgers).

The 1976 original film starred Oscar-winning mega star Jodi Foster (back when she was a kid star working in a spate of Disney films) as the daughter and Barbara Harris as her mom. It was a glorious little film about family and the weirdness of being a kid, which stuck to the zeitgeist so much that in 2003, Disney remade the film with their latest child star sensation, Lindsay Lohan, accompanied in this case by Jamie Lee Curtis as her mom.

Because everything is better as a musical (it just is, trust me on this, I know), in 2016, the material was turned into a musical, which debuted at the famed La Jolla Playhouse in San Diego last year. It's a relatively new play on the theater circuit, and now PCPA is set to become one of the early adopters.

For their take, PCPA starts with a set piece that can only be described as mind-boggling. The last few productions (especially Fences) tended to rely heavily on massive, looming pieces of artistically designed stage sets meant to tell you more about character than just serve as a spot for actors to stand in front of. With Freaky Friday, the set designers have once again proven they have a knack for melding form and functionality with appealing design features.

The songs in Freaky Friday may not be the foot-stomping roof raisers of say, a Hairspray (the music is reminiscent of the polite and unadventurous yet catchy head boppers one typically associates with Disney fare), but they have one strong thing going for them: The songs are funny. "Oh, Biology"—featuring Ellie (Molly Dobbs), Adam (Jeff Salsbury), and a strong group of background dancers—stood out in a huge way. Not only is the number hilarious, but it becomes immediately apparent these young actors are not just whittling time away waiting to catch the next Pokemon (this expression dates me, I know), but they are a serious group of energetic and passionate theater professionals, embarking on what are sure to be brilliant careers.

Karin Hendricks, who previously appeared in Lend Me a Tenor as Diana, displays a whole new layer to her talents here as Katherine, who is eerily transplanted into the body of her daughter, Ellie. Hendricks is good and believable playing a mom possessed by a gum-cracking teen hell-bent on hooking up with the cute boy at school. She also has an epic singing voice that never fails to punch a note right where it needs it.

Dobbs is also tasked with juggling what is essentially two performances during the production, and she especially shines as a teenager possessed by a worried and overworked mother. Dobbs is a graduate of Arroyo Grande High School who was selected for the professional internship program during the current PCPA season.

All in all, the production is solid, especially if you have young children and you're tired of sitting through comic book movies or watching Disney DVDs. The younger members of the audience I observed were highly engaged to the point of expressing earnest emotions during some of the more exciting or dramatic moments. But don't think Freaky Friday is just for kids; the show has enough jolts of real comedic fire to keep everyone entertained. ∆

Sun Arts and Lifestyle Writer Rebecca Rose always freaks out on Fridays. Contact her at rrose@santamariasun.com.