Dennis Larkins is the real deal, and not just artistically, but in every sense. After speaking with the renowned artist for just under an hour, his energy, drive, and charisma become contagious. His spirit, talent, and accomplishments are simply mind-blowing.

# Larkins has been creating for almost 40 years. He has studied painting at Yale, (yes, Yale), Kansas City Art Institute, and Colorado University. Along with legendary promoter Bill Graham, Larkins essentially invented what is today known as the outdoor concert. He's been a beloved imagineer at Walt Disney Studios and Larkins continues to make a majority of his living in the themed entertainment business in fact, shortly before this exhibit opens he will be meeting with the powers that be at Epcot Center for an upcoming project.

His art is deeply rooted, widespread, and powerfully everlasting.

But the latest venture for Larkins isn't about the stages he's designed for The Rolling Stones, or his time with Warner Brothers or Sega Gameworks. It's about a seminal Central Coast show, consisting of his juxtaposed, three dimensional, pop surrealist paintings. He currently shows at two galleries in the L.A., in one of those, alongside local Arroyo Grande artist Mark Bryan. That's the reason SLO is so lucky. Bryan and Larkins became buddies last year, and now we all reap the benefits of their friendship.

Like Bryan, Larkins considers himself a pop surrealist "Mark is more of a classicist though, my work is more, edgy, more pop, like Andy Warhol."

All Larkins' pieces are dimensional, the larger ones taking three to four weeks to create and the smaller ones about half that time. "The sculpture portion of the painting is done completely independent of the painting." Larkins goes on to explain that the sculpture is a series of layers that are superimposed. It starts with a drawing, and templates are used as well. The pieces that will be in the Free Range Art show at Steynberg in San Luis Obispo were completed in the last couple of years. 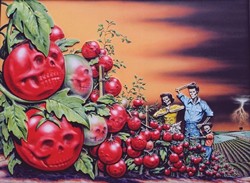 # But his influences go back decades. "On the technical side, the 3-D aspect is influenced by my theatrical career, in stage, television, and film. While building and designing full scale setsit was through that process and experimentation that I realized it would be unbelievably cool to apply those same techniques to painting." And 35 years later, he is still working in the same fashion. Pulp magazines, the era from the 1940s and 1950s, DC Comics, underground comics, and Mad Magazine also influence his art.

The narrative is as open-ended as they come the story of each piece can be perceived in a variety of ways, and Larkins digs it.

"I love people's explanations. I'm always surprised. "Bumper Crop in Denial Valley" is often perceived as a garden piece, but its juxtaposition is that its dark subject matter can be explained in a comical way. It has strong political and environmental implications. The tomatoes have death masks, and the people have skeleton faces, and they are standing there pleased with themselves. It's the 1950s idealism, twisted and turned on its head and what remains is the joke of it."

As far as subject matter goes, you'll likely find skeletons, and aliens. "They are obscure, obtuse," Larkins says, "you can read into them what you wantI consider my paintings 'coded narrative,' it's like a dream. Metaphor and symbolismthey require decoding. My perception is the skeletons are neutral, or positive, and the aliens are victimsthey represent ultimate creativity and freedomthat part of ourselves that's free. The skeletons have a stripped-to-the-bone appeal and are about truth. Our own mortality is the truth of our existence."

# "Crossroads at Dinosaur Junction:" "A god-like character with an oil derrick in one hand and having a helluva good time. But is he putting in or taking out?" This is the inherent conflict, two concepts going up against one another, and is prevalent in most of Larkins' pieces.

"Goddess of Sweat - No Sweat:" "This is a transformative painting," Larkins explains. The Grace Kelly-esque image is the goddess, and the story of life surrounds her, miseries are in the foreground, and the man and woman were actually taken from 1940s and 1950s Bengay advertisements. Another symbolic gesture is towards the Studebaker, which is a car Larkins adores, and collects.

"All my art is meant to use humor, as a way of expressing the human dilemma," he concluded.

Larkins doesn't plan on slowing down. He has so much more to give. "I don't design my paintings, I allow themit's intuitive. I'm a good mechanic so I can make it happen."

INFOBOX: Mix it up

The Steynberg Gallery is located at 1531 Monterey St. in San Luis Obispo. Dennis Larkins' exhibition runs through July. The party starts at 6 p.m. sharp on July 6. Info: 547-0278, www.steynberggallery.com, or www.startlingart.com.

Christy Heron can't think of any more catchy taglines. Help her out at cheron@newtimesslo.com.