Pedaling to a downtown café for a cup of joe and some lively conversation is hardly unusual in SLO Town—unless your rig happens to be an eye-catching, hand-powered tricycle that doubles as a wheelchair. 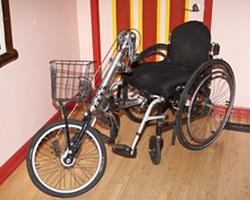 Specially designed by Greg O’Kelly so he could move easily around San Luis Obispo, the unusual wheelchair-trike has sat idle in a SLO house since his passing two months ago. Now Greg’s younger brother Myles would like to find someone else who would enjoy the ride.

“For Greg, it was such a freedom machine,” Myles said in a phone interview from his home in Madison, Wisc. “I’m interested in finding someone for whom it will be as exhilarating and freeing as it was for Greg.”

The stocky redhead was a familiar figure in downtown SLO for 25 years, often cruising the sidewalks in his wheelchair or hanging out with friends at Linnaea’s Café or Steynberg Gallery. Many knew that Greg became paralyzed from the chest down at age 23, following a motorcycle accident when he was in the Marine Corps in 1972.

He figured he could increase his mobility—and speed—by devising a way to pedal his wheelchair with his hands and arms instead of just turning the tires. Consulting with master welder Hank Van Gaale at Hank’s Welding in downtown SLO a few blocks from his home, the two came up with a way to put the device together.

“Greg could take off the trike attachment easily by himself and leave it outside Linnaea’s, then wheel himself inside like a regular wheelchair. He always got a kick watching engineering students examining the trike attachment and thinking, ‘What the hell is this?’” Myles said.

San Luis Obispo’s many curb cuts were a boon to his mobility in a wheelchair, unlike his experience in the Bay Area, his brother recalled.

“He wanted his independence. He was going to do it himself. He didn’t want anybody doing anything for him,” Myles said.

For someone in a wheelchair, being able to move around town and go into cafes and stores is especially useful, according to Vicki Richardson, office manager at AmpSurf in Pismo Beach, a nonprofit organization that serves disabled military veterans.

“It makes people more independent. They get exercise, they socialize, they’re out in the park. Mental rehabilitation is just as important as physical rehabilitation, and once people can do things, the world just opens up for them,” Richardson noted.

She and others who work with veterans in wheelchairs will be on the lookout for someone who could use Greg’s wheelchair-trike, although she said she doesn’t know of anybody local right now.

“Greg used to joke that it’s miserable being in a wheelchair, but the parking’s great,” Myles said. “With his transformable wheelchair, he could pedal to one place and have coffee, then go to another place for a game of chess, all the while keeping his hands clean by using the bike handlebar grips—unlike the filthy tires. Sometimes he’d go on road trips of seven miles in each direction, going out of his way to avoid hills.”

But the wheels come with a word of warning: “It’s not without its dangers. You can hurt yourself. Greg crashed it once or twice, trying to go farther and faster.”

And—reflecting Greg’s independent spirit—on the back of the wheelchair, where you’d expect to find handles so someone could push from behind, Greg’s freedom machine has nothing.