Finally, a concert where someone can yell out "Freebird" without irony! That's right. Lynyrd Skynyrd is coming to Pozo Saloon.

# As soon as news about the concert started making the rounds, speculation began about the band. "Who's left of the original line-up? The drummer's cousin?" Tsk-tsk, naysayers! There are actually a couple of original members.

Of course, one can be excused of skepticism. After all, the band lost three of its members including lead singer and songwriter Ronnie Van Zant in a plane crash at the height of the band's power in 1977. Afterwards, the band split up, only to reunite a decade later with original guitarist Gary Rossington, original keyboardist Billy Powell, original bassist Leon Wilkeson, and guitarist Ed King (who joined the band in 1973), adding vocalist Johnny Van Zant (Ronnie's younger brother) and guitarist Randall Hall. Rossington, Powell, and Johnny Van Zant are still with the band.

But wait, we're getting ahead of ourselves a bit. Let's go way back to when Ronnie Van Zant, Allen Collins, and Gary Rossington formed the nucleus of Lynyrd Skynyrd in high school back in 1965, in Jacksonville, Fla. Then they called themselves My Backyard, but when Leon Wilkeson and Billy Powell joined up, they changed their name to Lynyrd Skynyrd, purportedly as a "tribute" to their gym teacher Leonard Skinner, who had a reputation for punishing students with long hair.

The band was discovered in 1972, playing in an Atlanta bar called Funocchio's. Al Kooper, on tour with Badfinger, spotted the band and thought they'd be perfect for MCA's new Sounds of the South label, so he signed them and produced the band's first record, Pronounced Leh-Nerd Skin-Nerd (take that, mean gym teacher!). The song "Freebird," which Ronnie had penned as a tribute to Duane Allman, who had died in 1971, became Skynyrd's first radio hit, and the legend was born. Then four years later, the band disintegrated, forever finding a place in rock history.

I imagine when they reformed in 1987 that fans were skeptical then, too. After all, Ronnie Van Zant like James Dean or Marilyn Monroe or Janis Joplin or Jimi Hendrix became instantly iconic in death. But the band embarked on a reunion tour, which was captured on the 1988 double live album Southern by the Grace of God/Lynyrd Skynyrd Tribute Tour 1987. The re-formed Skynyrd began recording in 1991, and for the remainder of the decade, the band toured frequently, putting out albums occasionally.

"Live shows are really what this band is about," Rossington said. "We love to play live there's nothing else like it. We don't know anything else to do. We got it down now, [and] people are enjoying it so were enjoying doing it for 'em.

"It's a blessing, but it's been hard," he continued. "I've been through a lot a shit in my day heart surgery, the plane crash, and this and that, but to come back to this [band] that's what it's all about, what makes my life happen. I'm just real thankful for it all."

Johnny Van Zant, having been called to fill the shoes of his older brother, takes on his daunting role with respect and humor. "To carry it on," he said, "means everything to me. I'm gonna die one day, and the last thing I want to do is go towards the light and see Ronnie there going 'I'm pissed at you!' I try to do everything we do with the most respect and pride, believe me."

Check out Lynyrd Skynyrd on Sunday, July 15. The gates will open at 2 p.m. Criticnue will open at 3 p.m., followed buy Laidlaw (coming off of a successful opening turn for Van Halen). Tickets are $52.50 (general admission) and $70.50 (reserved).

Sedacca has created a diverse repertoire of favorite covers and Americana-flavored originals. Inspired by the jack-of-all-trades style of Bonnie Raitt, Sedacca also points to years of Grateful Dead shows as inspiration.

More music
The Clubhouse at This Old House (548-8500) has booked local Grammy Award-winner Louie Ortega for a regular Thursday night gig. Louie, who's played with the Texas Tornados and the Sir Douglas Quintet, performs at 10 p.m., as he will on Thursday, July 12. Believe me when I say that this isn't his first trip around the block. He got his start way back in 1969 when he recorded two albums as front man for the Atlantic Records group Louie and the Lovers. Also at the Clubhouse, you can see the Cuesta Ridge Mountain Boys on Friday, July 13, at 10 p.m. I caught the boys at a private party on the 4th of July and was blown away by how tight they were. Though they explore all manner of bluegrass, they also work their way through folk, reggae, and jazz-tinged tunes. And finally, classic rock duet Tommy and Chet play at 6 p.m. on the next couple of Saturdays, including July 14 and 21. 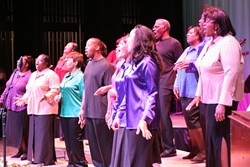 # Strike Fire Productions is putting on another punk rock show at Mongos Saloon on Friday, July 13, with local artists Undisputed and The Mongers, and San Francisco act The Kegels. The show starts at 9 p.m. and is free.

Local hard rockers Malo Culo play a wicked Friday, July 13, show at O'Reilly's in Grover Beach at 9 p.m. Prepare to be horrified at how good they are.

Rancho Nipomo Deli & BBQ will present a night of rockabilly on Saturday, July 14, from 6:30 to 9:30 p.m. when The Hydramatics and Marcy Jean & the Vincents play the all-ages show. Hot rod enthusiasts are invited to bring out their rods and customs for an impromptu car show. Rancho Nipomo is located at 108 Cuyama Lane, Nipomo, where Hwy 101 meets 166.

The Mestizo Street Trio which performs Mexican folk songs, '60s covers, and originals in the bilingual folk, rock, and country vein plays on Saturday, July 14, from 5 to 7 p.m., in La Palapa Restaurant in SLO's Marigold Center.

The Gold Coast Chorus and House of Prayer Gospel Choir play the next Village Summer Concert Series on Sunday, July 15, at 1 p.m. at the Rotary Bandstand on the Village Green in the Historic Village of Arroyo Grande. The groups are also planning to feature small ensembles, quartets, and soloists throughout the afternoon. Opening the show will be the Gold Coast Barbershop Chorus, which is comprised of more than 60 male singers and is part of the Barbershop Harmony Society. These family-style concerts are free.

This Sunday, July 15, West Coast jazz icon saxophonist Plas Johnson is the next attraction at the Famous Jazz Artist Series at the Hamlet in Cambria. Johnson is one of the most recorded saxophonists in West Coast history, having created the sound of the Pink Panther theme for Henry Mancini, playing as the featured soloist on all of Frank Sinatra's recordings with Nelson Riddle, and literally thousands of others. He'll be joined by pianist Joe Bagg, bassist Jim Hughart, and drummer Colin Bailey (as well as concert co-producers Charlie and Sandi Shoemake on vibraphone and vocals, respectively). There's a $15, 4 p.m. set, and a $12, 7:15 p.m. set or see them both for $20. Reservations are strongly recommended by calling 927-0567.

# The woO! continues to wow every Sunday morning with two-hour free-expression dance sessions at the Monday Club of San Luis Obispo. On Sunday, July 15, NorCal's Yum Session will perform live world fusion and trance funk dance music. Get your whirling dervish on, and follow up with a free gathering for teas in the garden after the dance session.

Turbo Negro tribute band Sexy Time Explosion is ready to freak you out again. The boys in denim will be firing up their sexy freedom machine at the Frog and Peach on Monday, July 16, at 8 p.m. to mark the return of SLO County's most notorious band, the Cruel Romeos, who will take the stage later the same evening. This will be the first show the Romeos have played since the mysterious return of vocalist Mike Hunstead. The Cruel Romeos have been banned from more venues than you've even been to, you don't want to miss this. So lock up your daughters and your medicine cabinets, because rock'n'roll is dangerous again.

Local jazz guru Mike Raynor is introducing a new program called City Nights. "I will be bringing artists from Los Angeles, Santa Barbara, San Francisco, San Diego as well as other areas on a monthly basis to perform with our group at the Inn at Morro Bay and the Sea Venture Hotel," he said. "The idea is to bring a great artist from the city to this area to add a city nightlife vibe to the Central Coast music scene, without driving a long distance." Recent USC Thornton School of Music graduate and vocalist Leanne Wright is the first scheduled artist. She'll appear with the Mike Raynor Group on Wednesday, July 18, at the Sea Venture Hotel in Pismo Beach, and Friday, July 20, at the Inn at Morro Bay in Morro Bay. 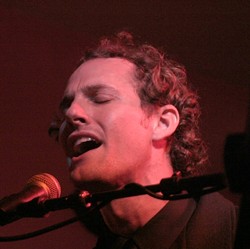 # Key an award-winning songwriter, performer, and recording artist wrote, among others, "Record Time (33, 45, 78)," recorded by country star Kathy Mattea in 1992. In addition to a monthly showcase at Linnaea's Cafe, he's also organized a showcase for Morro Bay at Monteleone's Rock (280 Harbor St.), which hosts regular shows on Tuesday nights from 7 to 10 p.m. One featured act plays a 45-minute set, sandwiched in the middle of the show between six or seven other artists.

The next showcase, on Tuesday, July 17, features headliner Butch Boswell, with Anthony Roselli, Loren Radis, Randy Fletcher, and Jonathan Strohm playing before and after. Boswell, a multi-instrumentalist, was a founding member of y'alternative act The Muses before going on to do some solo work, then forming Virgil Cane, a popular rock act with hits of country. If you're interested in being a part of upcoming showcases, contact Steve at SteveKey33@aol.com.

What's that? You're too big a fish for this pond? Or you want to try your hand at competing internationally? Okay, this doesn't give you a lot of time, but there's an International Songwriting Competition (ISC) you can enter, and if you submit by July 16, you'll save on entry fees.

One of the largest songwriting competitions in the world, ISC offers entrants a chance to share in $150,000 in cash and prizes, including an Overall Grand Prize package of $25,000 in cash and more than $20,000 in merchandise. Enter early to take advantage of ISC's Early Bird deadline. For songs entered on or before July 16, the first song entry is $30, and all additional entries are $20 (save $10 per entry on multiple entries). After July 16, the fee is $30 per song entry with no discount for additional entries. All online entrants also receive a complimentary six-month membership to Sonicbids.

Glen "Powerbar" Starkey meets all of your daily nutritional requirements. Unwrap and eat him at gstarkey@newtimesslo.com.