Amid falling oil prices and a mountain of debt, Freeport-McMoRan Oil and Gas is looking to offload some of its oil fields for a little bit of fast cash.

The Phoenix, Ariz., based company announced that it plans to sell its onshore oil and gas properties in California, including the Price Canyon oil field in Arroyo Grande. According to a filing with the Federal Securities and Exchange Commission (SEC), the company will sell off the Price Canyon operation and its other oil properties in the state to Denver, Colo., based Sentinel Peak Resources LLC for $592 million. 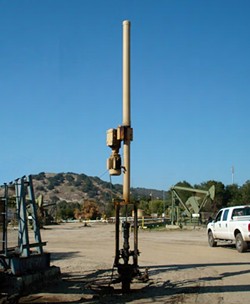 According to information from Sentinel Peak Resources, Price Canyon and the other Freeport-McMoRan properties in California produce an estimated 28,000 barrels of oil per day.

A statement from Sentinel Peak Resources indicated that the company would be hiring from existing Freeport-McMoRan staff and “complementing” them with employees from its Denver and California offices.

The sale comes as Freeport-McMoRan tries to cope with the aftermath of falling oil prices, which may have caused its stock price to take a big hit. In February 2012, the company’s stock was trading at $46.48 a share. As of Oct. 18, 2016, that price had fallen to $9.72. That decline occurred as the company struggled cut down on its debt, which it estimated at $20.4 billion in the beginning of 2016.

According to its filing with the SEC, Freeport-McMoRan indicated that the proceeds from the sale would be used to pay off debt.

“[Freeport-McMoRan] does not expect to record a material gain or loss on the transaction,” the filing read.

Locally, the sale also raises questions about the future of ongoing plans to expand operations at the Price Canyon oil field. Earlier this year, Freeport-McMoRan asked for an extension on a permit to drill an additional 31 wells and filed an application that would allow it to drill up to another 350 and replace 100 more. Both projects are currently on hold as the Environmental Protection Agency determines whether to exempt a larger portion of the aquifer/oil field from the Safe Drinking Water Act.

“Specifically, a change of ownership wouldn’t affect the status of the application,” Mackenzie told New Times. “Sometimes you can get a new owner mid-way through the process.”