Fresh air: Elephant seals and the volunteer docents who watch over them

Even on a blustery, wet, low-visibility day, tourists want to see the elephant seals at Piedras Blancas.

It’s something that’s on many a Central Coast visitor’s to-do list, according to Friends of the Elephant Seals Docent Coordinator Lisa Harper Henderson. And right alongside those tourists huddled under umbrellas are volunteer docents bundled in telltale bright blue jackets, helping to educate the public on coastal history, the elephant seal’s lifecycle, and other marine life that’s visible from the parking lot between the Pacific Ocean and the Pacific Coast Highway.

“We’ve got some pretty hardy folks out here; they put their rain gear on and go out there,” Henderson said. 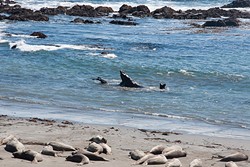 “The rest of the rookeries are on islands—and to be quite honest, they’re on islands because there’s no people,” Henderson said.

Although elephant seals are legally protected under the Marine Mammal Act, it doesn’t prevent people from harassing them. Human contact can change their behavior, which means the 2-ton to 4-ton beasts could find more isolated places to have their pups. Docents, according to Henderson, are a big reason that the seals stick around, because part of a their job is to prevent the public from getting too close.

Friends of the Elephant Seals was founded in 1997 and assists federal and state wildlife agencies by promoting safe and responsible wildlife viewing practices. Each year, it also funds field trips for five schools, which wouldn’t normally have the funding to visit Piedras Blancas.

Between 80 and 100 volunteer docents from Friends of the Elephant Seals man the boardwalks north of San Simeon in three-hour shifts. After completing the nonprofit’s docent training program, volunteers commit to doing three to five shifts a month for at least a year. Christine Heinrichs from Cambria is one of those hardy volunteers—rain, fog, or shine. She was out manning the fence line on Monday, Jan. 9, and spoke with about 42 people that day, after weekend storms dumped at least an inch of rain at Point Piedras Blancas and more than 2 inches in the hills above, at Hearst Castle.

“There’s a lot of confusion,” Heinrichs said of the activity on the beach that day. Water was streaming onto the beach and into the ocean. Adult females had several pups (born recently) surrounding them, possibly searching for mom. “I don’t know if a lot of the pups have been washed out or what.”

This is just the type of thing that keeps Heinrichs coming back to Piedras Blancas after 10 years as a volunteer. She’s watched things evolve on the beach about once a week for the last decade. It’s always different. There’s always something new to see or learn, and things are constantly changing.

Elephant seals started showing up at Piedras Blancas in 1990. The first pup was born on the beach in 1992, and eventually, those beaches became an elephant seal rookery. Now, there are upward of 23,000, because elephant seals usually return to mate on the same beaches where they were born—more pups are born every year, so the colony continues to grow.

Although Heinrichs lives in Cambria now, there was a time when she lived in Los Osos. She moved away for a little while before resettling on the coast.

“These huge, gigantic wild animals are showing up on our beaches. I was just so fascinated by them,” she said. “As soon as I found out I was coming back, I thought, ‘I’m going to be a docent.’ Like, we hadn’t even unpacked yet and I was going to training.”

Editor Camillia Lanham likes to wave at the seals on her way up to Big Sur. Send comments to clanham@newtimesslo.com.