by Camillia Lanham and Karen Garcia

Serving up Korean and Japanese dishes for a few dollars off the dinner price, Asian Bistro has daily specials between 11 a.m. and 5 p.m. if you're hankering for a food fix while you're in downtown San Luis Obispo. Stop into 857 Higuera St. between 11 a.m. and 10 p.m. Monday through Saturday and 11 a.m. to 9 p.m. on Sunday to try the newest flavors on the block.

Camillia I can hear it sizzling from a few feet away. A hot stone bowl filled with rice, beef, carrots, radish, bean sprouts, zucchini, cabbage, mushrooms, and raw egg yolk is walking toward our table. I sit up a little straighter to peer over the top of the bowl as Asian Bistro owner and chef Park Steve places it in the middle of our table.

Next to it, Steve places a bowl full of a red sauce.

I dip the tip of my finger into it for a taste—calm down, people, we're all friends here—sweet, salty, fermented, spices dance across my tongue.

"Mix it," Steve says as he moves his hand in a swirling motion before walking away.

I dip a spoon into it delicately and dish a little into the stone bowl, which, by the way, is still sizzling. I start mixing. As Steve walks back over to the table, he looks at me disapprovingly and picks up the sauce bowl and the spoon, stirring and pouring. "Now try it," he says.

Definitely, I'm the one in the wrong. It's crunchy and a little bit spicy and rich from the egg yolk that's now cooking into the hot mixture. But I'm a sucker for a good bowl of Korean bibimbap. And this is good. It's called Hot Stone Bibimbap and, literally, it's still sizzling away.

Steve opened the Asian Bistro a couple of weeks ago, on Feb. 27. He and his partner, Mr. Lee, are serving up a combination of Japanese and Korean food from a building on Higuera Street that has housed many restaurants over the years, most recently The Naked Fish.

Karen As Steve returns to our table with more colorful dishes, I immediately spot my absolute favorite Korean dish: bulgogi.

Bulgogi, if you didn't know, literally translates to "fire meat." But don't be fooled—it's hot in terms of temperature, not spice. The beef is thinly cut, marinated, and grilled on a stove-top griddle. It's another sizzling dish. 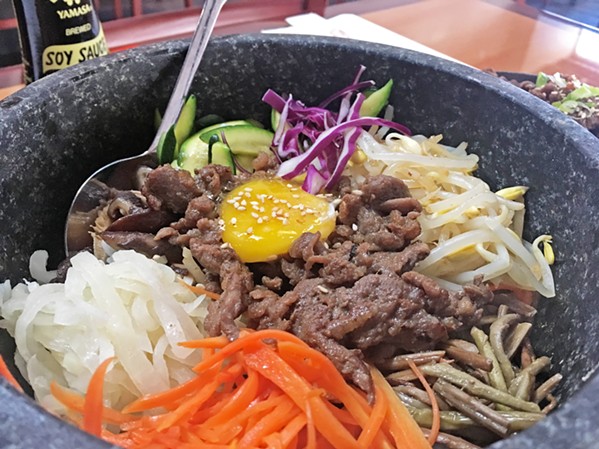 At this point, my mouth is watering, and I grab my chopsticks to dig in as Steve tells us he makes his own sauces and kimchi. There's none of that premade, manufactured, bottled stuff here, and it's noticeable with every bite. The beef is tender and savory with a hint of sweet marinade. It's served with a heaping side of rice, broccoli, and cabbage—which Camillia is quick to point out, I haven't touched. Of course I haven't yet! The beef was calling my name! But it's all very tasty, and the savory flavors of beef, veggies, and rice is a solid combo.

The bistro has weekly specials, from 11 a.m. to 5 p.m., including the bulgogi which is normally priced at $18 and is only $10. It's really a bargain in my book.

Steve hangs around as we're digging into his dishes—pretty quickly, might I add—and tells us he wanted to bring something different to the food scene in downtown San Luis Obispo. Sure, there are plenty of Japanese-style restaurants serving up sushi and teriyaki bowls, but Steve wanted to share his Korean entrees and his take on popular sushi items. 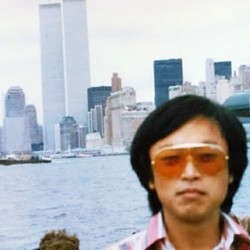 Camillia Steve is from South Korea and went to a culinary arts school there in the late 1970s before making his way to New York. There he worked at a restaurant in the 107th floor of the World Trade Center making sushi and steak for six years. Eventually, Steve said he opened his own sushi spot, Tokyo Sushi. He found his way to California and worked for Yanagi Sushi and Grill in Dublin and most recently in Santa Maria.

For the last year or two, Steve says he's been looking for a spot to call his own, one where he could put his own mark on the food universe in San Luis Obispo. When the building that The Naked Fish once lived in became available, he snatched it up. It's right downtown—a good spot, he says. And while there are a lot of Japanese restaurants in town, there isn't a lot of Korean food. And Korean food is definitely Steve's jam.

"I focus on Korean food because I'm Korean," Steve says. "Many other places focus on American-style."

Steve's been working on getting his Korean recipes perfect for years, he says, when Karen asks him how long it took him to perfect his kimchi. And that kimchi is still crunchy, a little bit spicy (not too spicy), with a nice kick of fermentation. He also tells us that he made the pickles served at the end of a plate of Fire on Fire sushi roll—shrimp tempura, spicy tuna, yellowtail, masago, and ponzu sauce.

I love Japanese pickles. Fresh cucumbers, sliced thin, and thrown in some vinegar with a little bit of salt and sugar. What's not to like?

Karen Speaking of Camillia's love for Japanese pickles, they're a beautiful addition to the most colorful dish on the table, Steve's Japanese ceviche.

Pieces (or should I say large sashimi-fileted chunks) of tuna, salmon, and yellowtail are served pyramid style in a bowl covering seaweed salad, lots of lettuce, Japanese pickles, and topped with yellowtail shaped into a flower and drizzled with cilantro chili sauce.

It's the most refreshing appetizer, and it could easily pass as someone's main dish, as the serving size is huge. What I generally like about Steve's dishes is that if the menu says something has chili or is spicy, it's only a hint and doesn't overpower the already flavorful food.

As Steve tells us about his past experiences as a sushi chef, he shows us a picture of himself with the Twin Towers in the background. It looks like it could be a selfie before selfies were even a thing, and it's amazing.

I ask Steve why we decided to become a chef, and he simply replies: "It's my job." He has a knack for food and a drive to perfect his own flavors into dishes. Δ