Fresh off the hook!

Living alongside the spectacular Pacific Ocean, as most locals do, it is no surprise there is at least one sushi bar—and usually two—in towns up and down SLO County. It’s noteworthy, however, when a sushi bar can set itself apart from most of them. That’s exactly how I reacted to the newest eatery in Morro Bay: Off the Hook Seafood Grill and Sushi Bar (OTH), founded Nov. 2, 2012. The owners describe their cuisine as traditional seafood with a touch of fusion where the focus is on quality first, which pretty well sums up my experiences there. They’re buying their fresh seafood from Giovanni’s Fish Market and Gallery in Morro Bay, and it tastes like it is fresh off the hook.

Giovanni DeGarimore, the investor behind the new seafood house, is providing OTH’s chefs with the finest local fish in the market. Not only that, he’s taking it further by keeping the prices at OTH reasonable compared to most other upscale restaurants (whether they’re Japanese, Californian, or any other style). And that’s sure to draw locals away from old favorites to try the new sushi bar. During the first visit with my husband Dan, we were impressed by the quality and the quantity. Now that type of fusion is something rarely found in the typical tourist-driven town. 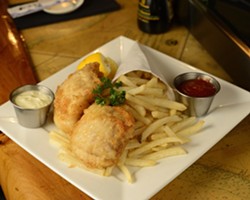 We started with our favorite—sashimi of good quality salmon and yellowtail—and washed it down with cold Kirin Ichiban beer. Next we tried the Oregon blaze roll ($14); generously sized, it’s filled with spicy tuna, cucumber, and jalapeño, and topped with Cajun-spiced albacore. The “Asian green sauce”—chile verde made creamy with the addition of avocado—was delicious according to our waiter, although it seemed more Tex-Mex than Asian to me. Our favorite dish that day, however, was the Off the Hook Cioppino ($25), a large bowl chockablock with crab, prawns, scallops, mussels, clams, and Pacific red snapper in a heady broth spiced with sambal and ginger rather than the usual Italian herbs. Talk about a good value! I couldn’t have finished it on my own.

The service has been friendly and courteous every visit, although the first time the kitchen was slow considering the restaurant was pretty empty during that day’s lunch. But it wasn’t an uncomfortably long wait, and the awesome views of the bay and its busy sea creatures keep you entertained. On my second visit, I sat at the sushi bar where you can still see the bay, but it’s hardly comparable to the awesome dining room views. Sushi chef Nogi is a personable guy who obviously enjoys his craft. I loved his yellowtail tataki with ponzu sauce topped with thin rings of fresh green onion. Nogi is given lots of freedom to be creative, and he comes up with interesting combinations that are posted frequently on Facebook. That day I ordered my favorite sushi, the rainbow roll ($11), which has an array of seafood toppings but none of those heavy mayo sauces I don’t like.

I knew DeGarimore was involved since I saw his posts on Facebook, but I didn’t find him at the restaurant until my second visit. I learned from him that it’s his first venture in a full-service restaurant. His partner is George Leage, a Morro Bay City Council member who’s been doing business in Morro Bay since his family moved there in 1952. Leage is the same age as DeGarimore, who founded Giovanni’s Fish Market, and both have been prominent figures in Morro Bay for decades. Leage manages OTH, previously his restaurant known as the Cannery. Giovanni DeGarimore explained: “George enjoys the opportunity to feature Morro Bay’s fine local seafood as much as possible.” DeGarimore explained that OTH isn’t about fine dining; it’s about offering contemporary dining that’s affordable and attractive to both tourists and locals.

“We want to hang on to our heritage in Morro Bay,” he said. “We won’t change the menu often, but we’ll evaluate it at least a couple of times a year, taking off what doesn’t work. We want to keep the menu filled with winners.”

During my third visit, I ordered the combination plate with chips ($14) that includes Pacific red snapper, prawns, and scallops with deliciously crisp, skinny fries (it said shoestring, but their fries are a bit thicker, which I prefer). I appreciated the lighter coating on the fish although it became a bit soggy by the end of the meal, but every piece was perfectly cooked. I also experimented with that day’s sushi special of local black cod but found it too oily to suit my taste. Chef Nogi generously offered us a taste of the special “sushi wine,” but we didn’t like it so we ordered beer again. Even though DeGarimore owns Stax Wine Bar in Morro Bay, he explained he’s not involved with ordering wine at OTH. That’s why he describes himself as the chief consultant: “I share my opinions and ideas, but I’m not a true co-owner because I’m not there on a day-to-day basis.”

During each visit, it was clear they’re still working on the menu since it had only been open two months at the time. Now that they’ve been open six months, I like the fact that DeGarimore admitted they’re still working on the menu, trying to perfect it. They also offer hamburgers and filet mignon to keep the menu friendly for all tastes, but I was there strictly for the seafood so I didn’t try those dishes. DeGarimore said that more than 50 percent of OTH sales are sushi orders.

“We’re still trying to identify ourselves,” he explained. “First we’re a seafood house, and second we have some Asian influence. We’ll hold on to classics like fish and chips, but we’re trying to give customers something they haven’t had before now.”