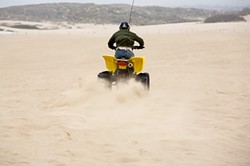 You could put it this way: “There’s plenty of litigation to go around,” said Deputy County Counsel Tim McNulty.

There’s so much litigation, the abundance may have soured a floundering $4.8 million deal between the county and the state over a swath of land in the Oceano Dunes. The property has been at the center of years of heated arguments about whether it should be preserved as an ecological buffer zone or remain as playroom for off-road vehicles.

But now, with a court decision looming, members of the off-roaders’ group Friends of Oceano Dunes have asked county officials for a speedy settlement.

Babak Naficy is representing the Santa Lucia chapter of the Sierra Club in one of two lawsuits over the dunes that have since been combined.

“[Friends of Oceano Dunes] want to settle now because they want to stop the judge from ruling against them,” he said.

Both lawsuits are based on whether the county’s Local Coastal Plan designates the area as a 584-acre buffer, which could negate the sale and continued use for off roading. Back in 2007, SLO County supervisors decided on an appeal by the Friends of Oceano Dunes that a sale to the state would conflict with the coastal plan and county General Plan, but they decided to sell it anyway. The Friends still sued, arguing there was no conflict and, in fact, state laws override the county’s policies.

On Dec. 11, Superior Court Judge Barry LaBarbera heard arguments from both sides and indicated he would rule before Dec. 31, after which he’s going on to a new court assignment. Within days, attorneys for the Friends contacted the county about the possibility of a settlement, McNulty said. The item was discussed in closed session during the board of supervisors Dec. 15 meeting, but there was no report.

Friends of Oceano Dunes President Jim Suty said in an e-mail response, “We have no comment at this time. Any comment of our legal actions will be handled through our attorney at the appropriate time.”

No matter who wins the case, the sale remains uncertain. The board that leaned in favor of selling to the state has since shuffled, and there’s no indication as to what the new board’s position will be. State officials are also grappling with a smoking hole of a budget, and any land purchases would be battling an estimated $21 million state deficit. ∆