The U.S. Department of Fish and Wildlife is conducting another review of the future Morro Bay water reclamation facility site and its potential impacts on the California red-legged frog. The review could lead to potential cost impacts and delays in the project's construction. 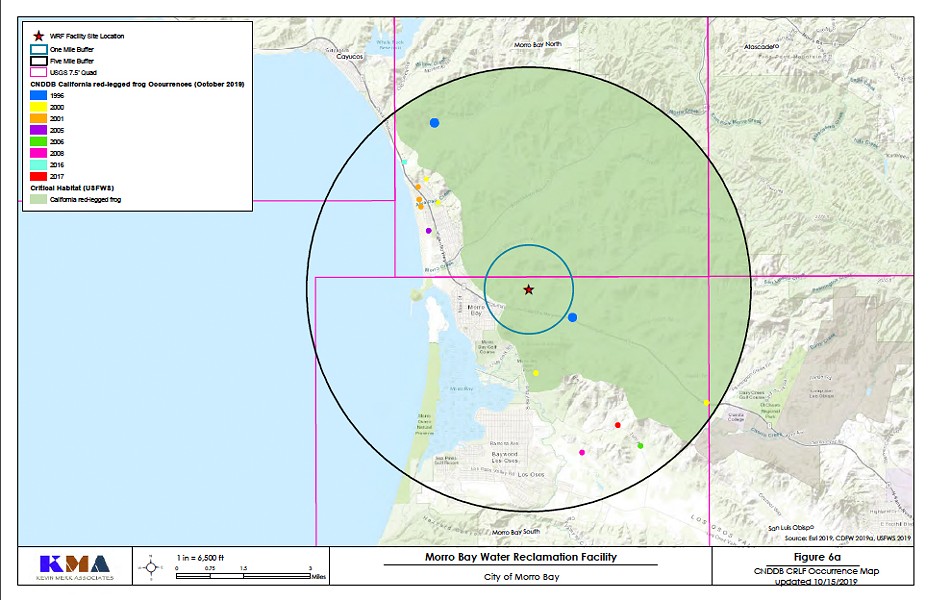 "This came, kind of, last minute, but again it's an important consideration so we're going to work through it," Morro Bay City Manager Scott Collins said. "It will mean delaying the project start for several weeks, up to several months, depending on how long the review takes."

Collins said the city has been working with the Environmental Protection Agency (EPA) in earnest for the past several years in an effort to secure low-interest funding through the Water Infrastructure and Innovation Act for the project. In 2017, the city's project was chosen for funding out of 12 nationwide applicants.

Because the Water Infrastructure and Innovation Act is federal funding, the project must comply with the requirements of the National Environmental Policy Act—one of the requirements being a review by the U.S. Fish and Wildlife Service under section 7 of the endangered species act.

On Oct. 10, the EPA received a letter from Fish and Wildlife indicating that the agency did not agree with the EPA's determination that the project "may affect, but not likely to adversely impact" the California red-legged frog and its critical habitat.

According to the letter, the department's determination is based on "the proximity of suitable aquatic habitat to the project site, the possibility of California red-legged frogs using Drainage 3 as a dispersal corridor, and the permanent loss of 7.1 acres of upland and dispersal habitat within" the frogs' critical habitat.

The department requested more information on the project regarding preventative measures to keep frogs out of the project's detention ponds, the fencing surrounding the projects, nighttime lighting, and how much riparian vegetation will be removed or temporarily disturbed along Morro Creek in order to install a pipeline bridge.

The EPA responded to the agency with the additional information, but Collins said it will be a few weeks before the city will know how long the review will take.

He said the review will temporarily postpone construction, which then leads to cost increases. Construction can't begin until the review is final.

"You can't predict what the issue will be, but that's why you build contingency into your budget because there are unknowns, and this is one of them," Collins said. "The environmental review is very important because it considers other species that use this land, and we want to be a good neighbor not only to our human neighbors but also wildlife."

According to city officials, there hasn't been a red-legged frog occurrence documented within a square mile of the South Bay Boulevard site since 1996.

Failure to comply with this process would nullify federal funding for the project, including the Water Infrastructure and Innovation Act and the Clean Water State Revolving fund. Δ