In the beginning there were few—vendors, that is. The year was 1978. The campy soundtrack from Grease was heating up the charts. It was a sunny Saturday morning, and a handful of local farmers gathered at the old Young's Giant Food parking lot on Broad Street in SLO.

They didn't know it then, but they were making history. This was SLO's first farmers' market.

Kind of baffling to think of SLO without the plentiful stands brimming with fresh produce, cheeses, olive oil, meats, nuts, and lavender, right?

Well, it wasn't always this way. Before there were more than a dozen markets across the county, there was just one. This one.

"It was very small the first couple of years, maybe 10 or 15 local farmers. Someone would bring their lemons, someone else would just sell beets, someone brought jam, another brought fish and fresh baked bread, and my daughter—about 8 years old at the time—was selling our radishes," SLO County Farmers' Market Association Executive Director Peter Jankay said.

The SLO County Farmers' Market Association is celebrating 40 years of produce and community spirit this month, an impressive legacy that shows no sign of slowing down. A celebration kicked off this past Saturday hosted at the World Market parking lot farmers' market on Madonna Road. When you've been around this long, you've got to take a moment to pause and look back. Of course, farmers' market fans celebrate by stocking up on local greens and shooting back a few shots of wheatgrass.

Long gone are the days when a few bales of hay served as the telltale sign of a sleepy farmers' market happening in a local parking lot.

"We didn't have thousands of dollars in sales, but it was exciting," Jankay added. "People would just walk around and there'd be nothing but good feelings."

If you're a longtime local, you probably don't shop this market weekly, but I bet it's the first place you take out-of-town guests looking to savor the many textures of regional color.

Of course, there are 10 other markets across the county selling everything from cider to kiwi to locally made hot sauce, too. 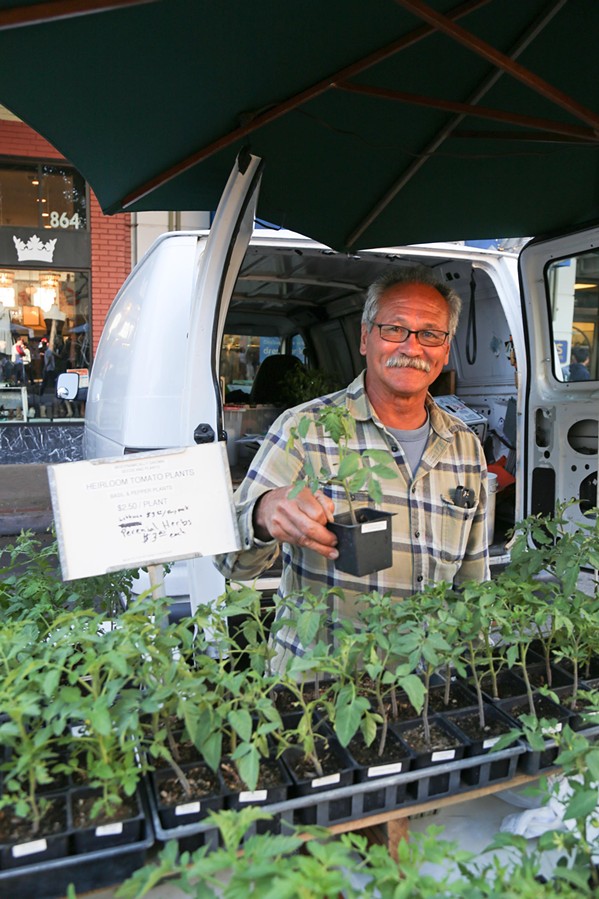 When I asked my friends which vendors they liked best from SLO's many markets, I was flooded with responses (so many, in fact, it made my head spin and my stomach growl). Peacock Farms tomatoes, Good Tides prepared goodies, Gracious Greens, the Vremery vegan cheese stand, the mother-daughter duo at Perez Farms, Pepper Creek, Julia's Juices, Riconada Dairy, Eufloria's roses, Hayashi farms for juicy strawberries, and Batista Farms for "the freshest salad greens ever." The list went on (and on, and on, and on).

From freshly laid eggs covered in pretty brown freckles to multi-colored bell peppers that look like stained glass, to the sweetest-ever-crave-worthy dry-farmed watermelon, everyone has their favorite market and their favorite market fix. I personally get a major dopamine hit every time I spot super seasonal squash blossoms from the Saturday morning SLO market, which I promptly fill full of goat cheese and fry in a crust of Italian seasoning, egg, and panko breadcrumbs.

Could there be a more delicious way to boost the local economy and fill your need for fresh, natural food? Plus—and I should say—the farmers' market is a far better place to meet new friends (or soul mates) than a dingy old bar.

"There are three consumers who went to the farmers' market in 1978," Jankay said, "and have continued coming to the SLO Saturday morning to this day."

Sure, these dedicated shoppers are no doubt thankful for their favorite farmers' markets for continuing to set up shop, day after day, year after year. But, I'd argue that the farmers—especially on this epic anniversary—are just as stoked. This is how, in turn, they feed their own families. One family feeds another, and the cycle continues.

Four decades in, and this symbiotic relationship continues to flourish in a seemingly mundane place: the street.

As Joni Mitchell says, they "paved paradise and put up a parking lot," but in SLO County, at least, those lots have shown every indication of remaining green. Δ

Hayley Thomas Cain is dreaming of squash blossoms. She can be reached at hthomas@newtimesslo.com.