From child soldier to philanthropist: Julius Achon to appear at the Fremont

Imagine the terror. You're 12 years old and the militant rebel group the Lord's Resistance Army comes to your village and kidnaps you and 15 classmates, taking you 100 miles away to their training camp. 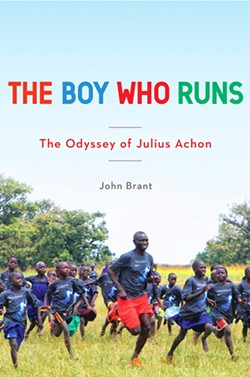 "I was forced to fight and kill, and when I refused to kill, I was caned—beaten on my butt. I couldn't sit for six days," Julius Achon recalled during an email interview from his home in North Uganda, where he's now a member of the Ugandan Parliament representing Otuke County. He's also the founder of the Achon Uganda Children's Fund, which opened a medical center in Northern Uganda in 2012.

His path from child soldier, to Olympian, to philanthropist and politician is chronicled in the book The Boy Who Runs—The Odyssey of Julius Achon, by John Bryant. Both Achon and Bryant will appear at the Fremont Theater on Thursday, Oct. 18, for a presentation including a panel discussion, short films, and African drummers and dancers (7 to 9 p.m.; all ages; $20 at runwithjulius.org; $40 VIP tickets also include a 5:30 to 6:30 p.m. reception, a copy of the book, book signing, preferred seating, and appetizers).

Achon will also run with the public on Saturday, Oct. 20, at the Rancho El Chorro Conference Center. You can register for free at 10:30 a.m. for a 3-mile cross-country run; however, there are shorter routes for walkers. Following the run, the Nipomo Rotary Club will offer a noon barbecue ($12 for adults and $8 for students).

Achon's story is beyond remarkable. He started running as a 10-year-old, inspired by the great Ugandan 400-meter hurdler John Akii-Bua, who won the 1972 Olympics gold medal. Three months after his kidnapping, Achon escaped, making his way back to his village.

A year later, he entered and won his first official race—without shoes! That secured his spot in the district championships in Lira. Unfortunately, he had no transportation to the race, so he ran there, 42 miles in six hours. The next day he won the 800-meter, 1,500-meter, and 3,000-meter.

"Yes, I ran 70 kilometers on the same day," Achon said. "It was Thursday, a day before the event, and I didn't realize I was tired until I stopped on the way twice to drink water running from the rain on the side of the road."

He went on to win the 1,500-meter in the 1994 World Junior Championships, which earned him a George Mason University scholarship. There he set a new NCAA record in the 800-meter. The 1996 and 2000 Olympics followed, and he had planned to compete in the 2004 Athens Games, but his mother was killed by the Lord's Resistance Army, ending his running career.

"We've been committed to helping Julius and his organization," said Nipomo Rotary Club member Loretta Butts, who helped organize and promote the upcoming local events. "There are a number of things that could have derailed him, which is why his story is so inspirational."

At just 5-foot-6, Achon is somewhat short compared to other runners. How did he achieve so much?

"What makes me so good? It's the power, determination, faith from God, and not giving up," he said.

"Since I joined politics, I have helped my community get electricity," Achon said. "It has increased my humanitarian work. I take myself as God's servant. I think people should learn how to do, give back, and never give up."

• Camp Fire Central Coast of California is seeking a new office and meeting space. Founded in 1935, the nonprofit youth development organization that serves more than 1,700 children in SLO and Santa Barbara counties has to vacate its current office in Pismo Beach before Thanksgiving.

• San Luis Obispo County was one of three California counties this year to receive a Golden Level Beacon Spotlight Award for Energy Savings from the Institute for Local Governments. The award is given to counties that have reduced electricity use at public facilities by 15 percent since 2010. Δ