Stephen Jenkinson is on an unconventional mission.

He’s out to change the public perception of grief and dying. Known by the moniker “The Angel of Death,” the soft-spoken Canadian works as a consultant to palliative care, which focuses on alleviating and soothing pain for the terminally ill. He helps guide people, and even whole communities, through the struggles of grieving, sadness, and most of all, dying. Over the years, he’s been at the deathbed of more than 1,000 people. 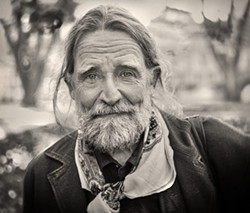 Jenkinson didn’t plan on making a living out of this profession. He was well into his 40s when he began. Someone at a hospital he was consulting at asked if he could take some men grieving for family members “off of their hands.” Their reason being these men were terrorizing the hospital staff.

“I asked them why they are so terrifying,” Jenkinson told New Times over the phone. “And they said that one group was really belligerent and hostile, but the other guys were much worse. And I asked, ‘How could they be worse?’ And the staff said that they just didn’t say anything at all; they were just silent all the time.”

Jenkinson formed a support group with the men and met with them on a weekly basis. Originally, the meetings were supposed last for one month, but they ended up lasting for over a year, at their insistence.

“They used to refer to the meetings as ‘sad school,’” Jenkinson said. “Because that’s where they came to learn sadness. And I guess that’s what I ended up teaching them—the capacity, the skill, the spiritual meaning and depth for sadness when the time for sadness is upon you.”

Jenkinson holds a master’s degree in theology from Harvard and one in social work from the University of Toronto. In 2010, he founded the Orphan Wisdom School, which he describes as a “redemptive project” that focuses on the skills of making human culture.

His unique philosophy of grief and death are at the forefront of the 2008 documentary, Griefwalker. Directed by Tim Wilson and filmed over a 12-year period, the movie shows Jenkinson in counseling sessions with those who are dying and their families, as well as his teaching sessions with doctors and nurses. The documentary will be featured at the SLO International Film Festival, where Jenkinson will give a talk after the screening.

Jenkinson will also be signing copies and reading excerpts of his fourth and latest book, Die Wise: A Manifesto for Sanity and Soul, which focuses on helping people come to terms with their own mortality.

“You can tell from the title and from the tone that this is not a suggestion,” Jenkinson said. “I’m more or less demanding it. If you want to have any hope of sanity when it comes to dying, you need to achieve this kind of wisdom, and you better get started learning it now. The subtitle of my book clearly has a political, aggressive, agitating tone to it, which is very deliberate and I think necessary for the current insanity that prevails.”

The insanity that Jenkinson refers to is the death-phobic views that are increasingly prevalent in Western society. Just look at the personification of death itself, the Grim Reaper. This symbol, which stands for something that happens to absolutely everyone, is meant to frighten and traumatize us, and boy does it work.

That’s exactly what Jenkinson is fighting to change; although he doesn’t see that happening any time soon.

“The change has to be deeply educational,” Jenkinson said. “Radically educational you could say. It will mean that a lot of old understandings of what it means to be alive will have to be composted. And that’s kind of what my life’s work has been, to propose that kind of radical revolution, and I’ve been doing it for quite a while.”

Instead of looking at death with fear, Jenkinson looks at it as an inevitability of life that one must accept, welcome even, in order to successfully prepare for our eventual demise. And while that may sound disturbing and just a touch macabre to some, Jenkinson maintains that this acquiescence of dying and removal of fear will enable one to live a better life overall. However, the majority of people don’t embrace this and, according to Jenkinson, this is what causes many to “die badly.”

“People died horrendously on my watch mainly because they had spent their entire dying time refusing to do it,” Jenkinson said. “What it means is that you had a chance to learn how to do it, and you refused. You had all kinds of time, and you refused that too. All in the name of being positive. And all of that positive thinking is just shit. Because it turns out you got nothing by avoiding your death except by being surprised and betrayed by it.”

In contrast, a good death—a rare occurrence in North America according to Jenkinson—is one that a person is conscious of from the start. They see it coming, and they aren’t blindsided or surprised.

“A good death you see coming from a long way off,” Jenkinson said. “You welcome it into the house. I don’t mean that you’re happy about it or eager. But you treat it as a guest that has come from a long way off and is not going to any house but yours. So it doesn’t become a stranger. A good death is a village-making experience. A bad death is small, insular; it’s isolated and terribly lonely.”

Jenkinson argues that this fear is rooted in the customs and habits of Western society. And while there are many people who argue that it’s just simply human nature to be afraid of death, Jenkinson wholeheartedly disagrees with this theory.

The issue with the rest of country, at least according to him, is that the culture—or lack thereof—does not include the rights of passages or childhood education that teach people what it means to die. Instead, people go through life with the same understanding of dying that they had when they were children.

“The tremendous fear around dying is really a consequence of a culture that is either in deep disrepair, or a collection of people that have not really gelled into any culture,” Jenkinson said. “And the fear of dying is symptom of that.”

Intern Adriana Catanzarite can be reached via Arts Editor Jessica Peña at jpena@newtimesslo.com.