From homebrew to pay-at-the-pump

The nation's hottest alternative fuel - biodiesel - can be found in SLO County in two flavors: do-it-yourself or at a soon-to-be- opened filling station 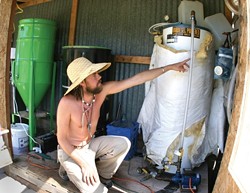 #Jason Hoar is standing in a parking lot off Prado Road and building gas pumps in the air with his hands.

Here's where they'll be, he says, and holds his hands on their imaginary sides. Hoar walks behind a tall chain-link fence and continues the tour of his gas station.

"The fuel tanks will go here," he said, walking in a square. "The fuel lines will go through here. Up there," he said, pointing to the wall of a nearby building, "We'll have a big biodiesel sign."

Hoar runs Agrifuels, a local company that teaches petroleum distributors how to sell biodiesel. Last year he hooked up with J.B. Dewar Inc. on Prado Road in San Luis Obispo, and together they'll be opening the first biodiesel gas station in the county.

"This is going to completely change how this county uses biodiesel," Hoar said.

Of peanuts and murder: A history of Diesel

When the German inventor Rudolf Diesel patented his namesake engine back in 1892, he actually designed it to run on vegetable oil. In fact, when he debuted a prototype to amazed scientists at the 1900 Word Exhibition in Paris, he ran it on peanut oil.

Running an engine on a cheap, easy-to-make fuel was part of Diesel's philosophy. He wanted a way for small workshops and craftsmen to compete against industries that used large, expensive engines. Today, some of his views seem almost prescient.

"The use of vegetable oils for engine fuels may seem insignificant today. But such oils may become in the course of time as important as petroleum and the coal tar products of the present time," he wrote in about 1911.

Two years later, on a trip on the SS Dresden to England, Diesel disappeared. His body was found by another ship several days later.

Unsurprisingly, his mysterious death has attracted a host of conspiracy theorists. Some attribute his death to German agents who didn't want their countryman to selling his invention to France and Britain in the years leading up to World War I.

Another theory lays the blame on a familiar bad guy: Big Oil. By the turn of the century, petroleum was big business in the United States and around the globe, and it could have been that Diesel's wildly popular engine threatened petroleum monopoly profits.

No matter how Diesel died, after his death his engine was engineered to run only on petroleum and his veggie-oil vision was mostly forgotten. 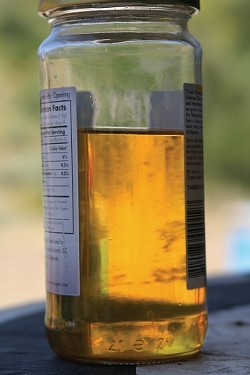 #Over the last five years, biodiesel - a low-emission, biodegradable, nontoxic fuel made from vegetable oil and used in diesel vehicles - has become increasingly popular across the country. The National Biodiesel Board estimates that in 2003 about 25 million gallons were sold across the nation, up from a half million four years before.

This year will see an even larger jump in numbers: According to the Indiana Soybean Board, that state alone has used almost 50 million gallons of biodiesel since Jan. 1.

One reason for the jump is an increase in the number of gas stations that now serve biodiesel. There are now thousands of biodiesel pumps across the nation; Midwestern ag states like Minnesota, Iowa, Missouri, and Indiana boast the highest concentration.

Here in California, there are 28, mostly north of the Monterey County line.

And soon there'll be another. Hoar is still waiting for the necessary permits from the city. When those come through - "hopefully very soon," he said - it'll be time to break ground, and install the pumps and tanks.

How an engine can run on french fry grease

(And why it's so good for the environment)

Most importantly, biodiesel and vegetable oil is not the same thing. Sure, it's possible to run a diesel engine on what comes out of a deep-fat fryer. The problem is, the oil thickens when it's away from heat and makes it difficult to get it through an engine's fuel line.

But if you take that same french fry oil and put it through a simple refinery process call transesterification, you get a fuel that flows like gas or diesel. That refining process also ensures the fuel meets industry and government standards. Once refined, the fuel can be used at full strength or mixed with diesel fuel (an option that creates a cheaper fuel). Full strength is called B100; other names, like B20, represent the percentage of biodiesel that's been mixed with petroleum.

And it doesn't just come from fryers. Most of the biodiesel used in the United States today comes from soybean oil. Around the world, canola, palm, corn, peanut, sunflower, flaxseed, and mustard oil is also used.

So how does it work?

In a gas engine, gas and air are compressed and then ignited by the sparkplugs. A diesel engine doesn't have sparkplugs. It takes air and compresses it more than twice what a gas engine does. That superheats the air. When fuel is injected, the mixture spontaneously combusts and powers the engine.

Biodiesel has what's called a "high flash point." That means that in the right conditions - i.e., the super-heated, super-compressed conditions of an engine - it will burn just like petroleum products.

But unlike those petro-fuels, biodiesel is nontoxic and biodegradable. And even better, it produces a fraction of the emissions those other fuels do.

In a 2002 study by the federal Environmental Protection Agency, scientists found that engines using B100, or 100 percent biodiesel, produced almost 70 percent fewer hydrocarbons, and about 50 percent less particulate matter and carbon dioxide. Unfortunately, nitrogen oxide emissions do increase by about 10 percent.

One other small drawback: biodiesel is a strong solvent. On one hand that's good; who doesn't want a cleaner engine? On the flip side, some hoses in the engine's fuel line need to be replaced because the biodiesel can break them down.

And since the biodiesel will dislodge carbon deposits in the system, the engine's fuel filter needs to be replaced at least once after the first tank of biodiesel. Some older models of vehicles will actually go through several new fuel filters before the engine is completely clean.

In the hills above Atascadero, there's another source of biodiesel. Mikel Robertson and a few friends run a small setup that converts used vegetable oil from local restaurants to biodiesel. It's the only home-brew facility in the county; it produces 25 to 30 gallons a week, which Robertson and his friends use to run their diesel cars, small trucks, and even a tractor.

#On a recent morning, Robertson walked a couple visitors through the refining process. First there's the oil. The best, says Robertson, comes from sushi restaurants. That's because, unlike fast food joints, they don't reuse their oil, so it's a higher quality.

The oil travels through a complicated-looking path: an old hot water heater where methanol and sodium or potassium hydroxide are mixed in; a settling tank where glycerol is taken out; another tank where more glycerol is washed from the fuel.

"It's not that hard. If you came out here and worked for a day, you'd see," Robertson said. "But that's not to say that making biodiesel isn't a responsibility. It's definitely a commitment."

Noah Smuckler works with Robertson making biodiesel. He thinks Hoar's new pumps are going to be a big success, namely because many people can't make their own.

"If you ask someone who works 40 hours a week to either get a drum delivered to their house or to spend another 10 hours a week to brew fuel, they're not going to do that," he said. "Having a pump will make it much more accessible."

How can I run my car on veggie oil?

On June 10, HopeDance magazine is holding a "Biodiesel Evening." There will be two short films, "French Fries to Go" and "Veggie Van Voyage," and then the trailer to the soon-to-be-released "Fields of Fuel." Jason Hoar, Ryan LaPorte, and Mikel Robertson will answer questions about production and distribution. The event takes place at 7 p.m. at the SLO library on Palm Street.

There are also a host of web sites that provide information. In SLO, Agrifuels can be found at www.agrifuels.com. The National Biodiesel Board lives at www.biodiesel.org. And the woman behind www.localb100.com, Maria "Girl Mark" Alovert, is a wealth of information for do-it-yourself biodiesel home brews. Her site is a compendium of biodiesel-related information, resources, and links.

Ryan LaPorte, another biodiesel user, agrees. Plus, he said, Agrifuels will be buying in bulk and selling fuel cheaper than if you were to buy a tank of biodiesel from a distributor.

Right now, biodiesel is more than $5 a gallon if you were to buy only five gallons. Purchase the fuel as a 55-gallon drum, and the cost drops to a little less than $4 a gallon. In bulk, the price sits around the $3 mark.

How much will biodiesel cost at the Agrifuels and J.B. Dewar pumps? Hoar won't say just yet. When we open, he said with a grin, we'd like to be close to what people are paying for gas.

For some people, the price won't matter. Many of the people who are involved with home-brewing biodiesel in the county talked about how their fuel choice is inescapably tied in with their politics and the politics of petroleum. Then there's how the fuel fits with their ideas of ecological sustainability. And their ideas of environmental health.

"I have a hard time giving my money to gas stations," said Smuckler. "I like filling up with biodiesel. It feels like you're investing in the homeland."