From Prague to SLO Restaurant Month, with love

Butter (and a lot of other delicious things) is available at a slew of restaurants during SLO County Restaurant Month, continuing through the end of January. Participating restaurants will offer special prix-fixe menus of three courses at $30 to $40 per person or other special offerings. Prices, offers, and availability vary per restaurant. Go see for yourself. For more information, visit slocal.com.

This is what the waitress is yelling in my general direction, standing in the middle of the dining room. She is fed up.

The entire restaurant is the size of a large closet. The kitchen appears to be a tiny compartment through a curtain. The chef is a mysterious figure that might be, in this case, a ghost—or perhaps a game show host, ready at any moment to jump out and announce, "You've been podvedeno!"

We are seated at one of three empty tables, next to a window looking up and out onto the bustling tourist attraction known as Prague's Old Town Square.

We stopped here for a late lunch after thinking this place looked pretty stinking authentic. Plus, let's be honest. They had a deal posted on the front door: four course meal for just 150 Czech Koruna (about 7 U.S. bucks). That's what really snagged us.

Our feet are aching from traveling around the cold, cobble-stoned city. We are ready for some authentic potato pancakes and dumplings. Something hot—anything full of carbs or meat.

We were promptly buzzed in and taken down a small flight of stairs below street level (how Old World!). The tiny dining room is heavily carpeted and the bar consists of a small table cluttered with dusty bottles (perhaps we'll be offered a shot of Becherovka, Prague's famous herbal liqueur!).

None of this would transpire.

First, we are told that the four-course deal was no longer available —by the waitress yelling, 'No!' and ripping the menus out of our hands, the menus we had found ourselves by rooting around the dining room, as no one had greeted us when we walked in.

Next, we are served the soup: "a rich broth with cognac, duck meat, seasonal vegetables, and noodles." It took one hour to arrive and turned out to be a few frozen vegetables swimming in a watery broth with something that appeared to be the chewed end of pencil eraser. No noodles.

Of course, we laugh. This is the fun of traveling. You never know just what you'll get. However, we are pretty hungry.

The soup is served in bowls the size of a child's toy teacup and the beer is served in a comically massive mug. We don't complain.

Beer is cheaper than water in Czech Republic, so we sip the crisp, cold Pilsner Urquell and resolve to roll with the punches. We cross our fingers that the cheese plate and endive salad will arrive soon.

After all, we'd had other amazing meals in Prague. Sure, the waiters had all been pretty cranky, with the exception of a fancy shmancy meal at the Imperial Cafe, which looked like something out of Hearst Castle and was reportedly an old hangout of Kafka. We didn't mind paying extra for pleasantries, even if we knew we might as well have one word plastered across our foreheads: "Trump."

We told ourselves that we didn't need to be babied, like some Americans. We kind of deserved the abuse, even. Plus, wasn't the curmudgeon vibe part of the authentic charm of Central Europe? How freeing it is not to have to exchange small talk! How swift and efficient the queues are!

Our food never comes, but the beers somehow appear, as if by magic. We became delirious and half drunk. It was like the waitress wanted so see how far she could push us.

First, she decided to take away all of our silverware, never to be seen again.

Hadn't it been like two hours now? We hadn't even gotten a slight whiff of our entree or our long forgotten bread. Where was our silverware? Were we going to die down here?

Now the waitress, having finally tossed a basket of cold bread on the table, is smirking with delight. We ask for butter, but she only vanishes for another half hour.

Finally, we catch her, corner her, and plead again. She gives us a weird look and vanishes a second time. By now another table has come in, and she is speaking dramatic, flowing Spanish sentences and offering the newcomers shots of that famous herbal liqueur in tiny frozen fluted glasses.

Finally, she says the unspeakable: The two words I'd never heard uttered in any restaurant in any country. "Let me get this straight. You have, like, no butter in the entire restaurant? Like, none at all?"

My sister and I share a horrified glance. A nervous laugh.

I pull up the menu, thinking for sure that we must be wrong. The customer is always wrong. This is the unofficial mantra here, and I get it. Every country's political baggage is displayed in everyday interactions. A restaurant is a perfect example of this.

After WWI, Czechoslovakia managed to remain the only democracy in Central Europe all the way till the '30s, but, of course, we all know what came next. The following years brought WWII, brutal Nazi occupation, the rise of communism, then Soviet occupation, and finally, revolution and the formation of the new unified Czech Republic in 1993. Of course, I am oversimplifying (a totally American thing to do).

Hostility and distrust? Understandable. Mostly, there is an undertone of being "fed up," a sense that everyday folks have been put upon and are one bad interaction away from throwing in the towel. Add all this in with the sight of two boisterous, loud Americans in red lipstick, red hats, and red coats, and—well—you have war on your hands.

But is this so wrong? I imagined my waitress sitting down to a meal at a fast casual chain restaurant in Southern California. She would probably have the same shocked expression on her face.

The Americans—the forever new kids on the block with our own dark history of slavery, European rule, and obsession with leveling the playing field—we just want to be liked. It's annoying, really. We want to get the fat tip, even if we must kill with kindness. We smile even when we're faking it. Waiters overdo it, asking if "we're all OK over here" as if it's a therapy session, not supper.

To each her own, right?

I try again on the butter front, an optimist. I was always told the squeaky wheel gets the grease. How wrong I am.

I point to the word, "butter," as if this will help clarify everything. Our waitress, our ruler, simply laughs, offers another flat "no," and skips away.

We eat our cold bread in silence like the pigeons in the town square. The "entrees" finally arrive, although we must request new silverware to eat it: Mine, a massive plate of chopped endives, bitter and raw, tossed with a bit of sour lemon dressing with a few half-hearted walnuts. My sister's cheese plate looks like the end of a charcuterie platter at a good party (mostly rind and a few stray crumbles). 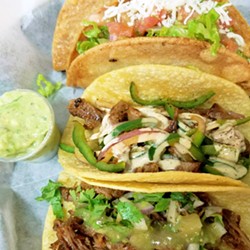 A single grape is quartered and placed along the rim like a compass, or a dark joke: North, east, south, west. Do you know where you are? Perhaps you should go home."

We laugh and enjoy ourselves anyway, because we are Americans and we are nothing if not loud and unsinkable. Our laughter fills the tiny room, which probably annoys the chef, if he's even back there. We tip generously. It's not all bad.

My sister and I are together in a strange place, grinning—as Americans do—through the discomfort. We are asking for more than what reality wants to give us. Maybe we are just entitled.

Then, we see it: A quarter-sized blob on my sister's plate that must be some sort of soft cottage cheese?

She flicks a butter knife through the substance and smears it on the cold bread. I do the same. Like that, the blob is gone, swimming in our bellies. But it is so sweet. I've never had better.

It is butter! Δ

Hayley Thomas Cain is still proud to be an American (sometimes). She can be reached at hthomas@newtimesslo.com.