For some people, it takes decades of painstaking trial and error to find a true passion in life. Some never find one. Rachael Hansen found hers before she finished elementary school.

Hansen was just 10 years old when she joined a sewing group for kids and learned how to make log cabin quilts. She was hooked instantly. She unleashed an endless series of mini-quilts and other projects at home, stitching together every piece of scrap fabric she could dig up with a bulky metal sewing machine of her mom's. 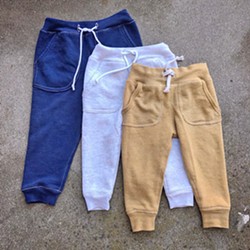 Hansen, now a grown woman with a child of her own and another on the way, nibbles on a Nautical Bean coffee cake muffin and laughs as she talks about the many failed sewing projects of her childhood.

"I ran out of material, I sewed so much," she says.

Her grandmother started sending her fabric as gifts—some pieces of which she still keeps in an ever-growing collection of material—and that year on Christmas, she unwrapped a sewing machine of her own, her very first. It was just a small, lightweight domestic machine, but Hansen used it for nearly two decades until it finally crapped out in 2015.

Ever since that first workshop, sewing has played a big role in Hansen's life. Doing patchwork for friends and families, quilting, making Halloween costumes for basically everyone she knows. For years, she taught painting and sewing classes to adults with disabilities, and she even made her own wedding dress.

So a year ago, when Hansen was bound to her couch at home with her newborn child, sewing was the first activity that came to mind when she decided she absolutely needed to do something other than binge watch Netflix and breastfeed.

She'd never wanted her favorite hobby to become an overwhelming chore, but after browsing some well-known seamstresses on social media, she decided she'd give it a try and put her services out there for the world—or at least the Central Coast—to use. She made business cards, Instagram and Facebook accounts under the name "SLO Seamstress," and started taking on her first projects for profit.

Soon the Arroyo Grande resident was repairing holes and tears in pants and shirts and even shoes, embroidering unique designs into clothes of all kinds, hemming, and making alterations. 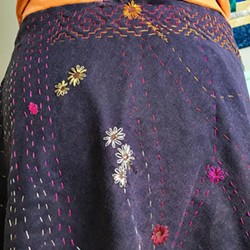 "Mostly [business] comes to me because there aren't a lot of people out there who do little repairs like me," Hansen says.

Each week, she typically has about one or two people reach out to her about a repair, mending projects that she says run anywhere from about $10 to $20 a pop. They're usually small, simple repairs, but a lot of customers come to Hansen for her signature patchwork—holes that she reinforces with fabric and sews together using colorful thread and hand-embroidered designs.

The once-torn knees of a pair of gardening pants Hansen worked on are now patched with green leafy designs. Each of the many holes in a well-worn skirt are mended with little multi-colored flowers.

As a big believer in upcycling, she's happy to help people keep the clothes they already have in wearable condition. And although sewing was once a common skill, it's not something many people know how to do in today's world.

"It's a certain personality type for sure, I think," Hansen says. "It takes a certain amount of patience to do it and get good at it."

SLO Seamstress isn't just about repairs, though. Hansen says she's worked on everything from curtains to bean bag chairs. She's led workshops, works with businesses, and even designs her own clothes and bags using repurposed material. Her most popular design to date is for children's joggers made from the sleeves of adult sweatshirts.

Hansen says she's kept busy for the past year, but her fear of sewing becoming a burden? It hasn't happened.

"I really do love sewing," she says. "I still like finding time to sit behind my sewing machine and start a new project."

• Longtime community banker and commercial lender Thomas Sherman was named executive director of the San Luis Obispo County Housing Trust Fund by its board of directors on Jan. 1. Sherman attended Cal Poly and several other schools and has devoted significant time throughout his career to the community through various nonprofit organizations. Sherman will be taking over for former director Jerry Rioux. Δ