Less than a year ago, Jesus Vazquez was playing soccer for the SLO High Tigers. Now, he's playing professionally for the Tigres in Mexico 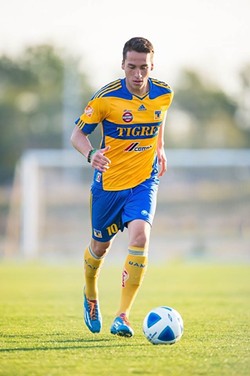 When you first hear Jesus Vazquez’s story, it sounds like a fantastic, unproduced sports movie script.

Our protagonist grows up with two older brothers in a working-class family, and always pesters his brothers to let him play soccer with them. Though he’s smaller and younger, he keeps getting better. Eventually, he’s beating his brothers.

Dreaming of being a soccer pro, he enters a long-shot soccer tryout with thousands of other hopefuls. After impressing some scouts, he makes it to an elite, final tryout. Amazingly, he’s then offered a professional contract, fulfilling his dream and thrilling his family.

While most of us have to visit a movie theater to experience that story, it’s the blissful reality for San Luis Obispo native Jesus Vazquez and his family. On Jan. 4, Jesus, 18, signed a professional contract with Tigres UANL, a professional soccer club in San Nicolás de los Garza, Mexico.

“The experience has honestly been like a dream to me,” Jesus wrote in an email to New Times from Mexico. “I wake up every day and head to the training facilities and think to myself that this is any player’s dream.”

Growing up in SLO, Jesus inherited his passion for soccer from his family—mother, father, two brothers, and a sister. He said he learned the game playing with his brothers and took his skills to the next level playing for different teams in middle school and high school.

“We all love soccer, and that was definitely a bond for our family,” said José Vazquez, Jr., one of Jesus’ older brothers. “Between us brothers, games were always competitive. He always wanted to play, even as the youngest, and we would pressure him, because we knew he had potential.”

José said that all three brothers eventually played for the SLO High Tigers, but Jesus had the most success. As he was approaching graduation in mid-2013, he received several offers from Division I soccer programs.

Jesus said he was strongly considering playing collegiate soccer as he wrapped up his time at SLO High, but wanted to give his dreams of going pro a shot before making a decision. Hoping for the best, he drove to San Francisco with his family for an open tryout called the “Alianza de Futból.”

At the Alianza tryout, Jesus was competing against thousands of young players, all hoping to be noticed by scouts and picked for the “national showcase” of 15 elite players, who would then have the opportunity to show their skills to yet another round of scouts.

“When I saw the hundreds if not thousands of players that day [in San Francisco], I have to admit it was a shock, but I believed in myself and knew I was well prepared,” Jesus wrote.

The rest is history for Jesus, who was picked for the “national showcase” in Los Angeles and subsequently received tryouts for five teams in Mexico.

Jesus said he was cut by the first team he tried out for, which made him realize he would have to give it his all to prevent his dream from slipping away.

His second tryout was with Tigres UANL (which stands for Universidad Autónoma de Nuevo León, the public university of the Mexican state of Nuevo León). Nuevo León is a northern Mexican state, and the Tigres are based in a suburb of Monterrey, the state capital, about 150 miles south of Laredo, Texas.

The Tigres offered Jesus a 2 1/2 year professional contract, which he accepted in January, after some deliberation.

“All of this happened in a blink of an eye, but I am trying to stay calm and soak in every moment of this experience,” Jesus wrote to New Times. “Playing soccer for a living is something many people only dream of and, luckily, I am living that dream.”

José said he talks or Skypes with his brother almost every day, and that the entire Vazquez family is ecstatic for Jesus.

“He’s such a competitor, because he has to be at the top of his game every single practice,” José said. “He’s never been to Mexico before or played on this level, so I’m definitely amazed in how well he’s done adapting and competing with older players.”

Jesus is currently playing with the U-20 (Under 20) squad of the Tigres. U-20 players are still pros, often practicing and traveling with the first-tier squad, and waiting for their chance to move up to the senior team.

Just recently, Jesus received a “huge opportunity”: an invite to try out for the U.S. National U-20 team in April. If Jesus makes that team, he would be competing in the U-20 World Cup in New Zealand in 2015.

Jesus said practicing with older Tigres players whom he’s seen play in European leagues and the World Cup has been a surreal experience. He said he currently lives in a “very big house” with lots of his teammates from Colombia, Argentina, and the United States, and that there is “rarely a dull moment.”

Despite his significant soccer successes, though, Jesus said that family and education are the two most important parts of his life. He explained that he chose the Tigres partially because the university-associated team required its players to enroll in classes.

“I will be taking online courses in a U.S. school, which Tigres will pay in full as part of my contract,” Jesus wrote. “My family has talked to me about keeping school as an option for what will happen after soccer, and I want to follow their example.

“It’s my first time being away from home, and my family inspires me to work hard every day, they have always supported me, and that means the world to me,” he wrote.

José said the feeling is mutual among the Vazquez clan.

“As a family, we’re definitely excited and supporting him, whenever there are little things here or there that we can do,” José said. “It’s amazing to think he was playing for SLO High and graduating just a few months ago—it’s been a roller coaster.”