From the inside out: SLO Rep's 'A Little Princess' shows power of kindness

A Little Princess will show at the
SLO Repertory Theatre through Jan. 28.
Tickets range from $17 to $25. Visit
slorep.org for more information.

It's easy to be nice when everything is fine and dandy. But what kind of monster would most of us be on the worst possible day imaginable?

SLO Repertory Theatre's rendition of A Little Princess (starring the child actors of the Academy of Creative Theatre program) tackles this quandary head on, and its protagonist Sara Crewe (Sienna Ritter) is not found wanting. 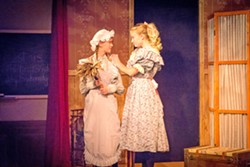 Adapted by June Walker Rogers from the classic novel by Frances Hodgson Burnett, the story takes us to the early 1900s in London, where a young Sara is being sent to a girls' boarding school by her father, Captain Crewe. Everyone at the school, and in particular the headmistress, Miss Minchin (Linnaea Marks) is tittering in anticipation of Sara's arrival, as her father is known to have made his fortune in the diamond mines.

With sets rotating seamlessly and simply from the classroom, a boarding school bedroom, the attic, and the streets of London, we learn more and more about Sara. Ritter's portrayal of Sara embodies the fierce, simple kindness of a child, while also not taking any meanness from others, even the formidable Miss Minchin, whether it's directed at herself or those unable to protect themselves, like Becky the maid (Molly Himelblau).

On her birthday, Sara chooses to give presents to all the other girls at school rather than receiving them herself, slowly warming the hearts of her enemies like Lavinia (Sophia Lea) and only further endearing herself to friends like the constantly eating Ermengarde (Katie Karleskint). Alas, disaster strikes, leaving Sara orphaned and penniless, and Miss Minchin's warmth for her pupil quickly fades as she sells all of Sara's things, moves her to the attic, and forces her to work in the kitchen and classroom to earn her keep.

While it would be easy for A Little Princess to be infused with a hefty, overwhelming, and unrealistic dose of Pollyanna-esque sweetness, instead, this story is inspirational without encouraging martyrdom. Sara is despondent when her fortunes change but still has a kind word or game to cheer up those around her, causing her peers to continue comparing her to a princess, even as she dons rags. Sara's actions even inspire others to stand up for what is right. "You are mean," Lottie (Addisyn Tejada), one of the youngest girls at school, tells Miss Minchin when the headmistress tries to forbid her pupils from socializing with Sara and Becky.

Arts Editor Ryah Cooley's favorite princesses include (but are not limited to) Belle, Kate Middleton, and Marie Antoinette. Contact her at rcooley@newtimesslo.com.