From the other side: Cal Poly exhibit highlights incarcerated artists' work

It started with a single rose for his mom.

Tony Chisom had never been one to draw, but he found himself with a lot of free time on his hands. So inspired by a friend, he drew that first flower in 1988. 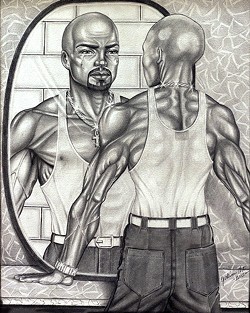 “I apologize for kidnapping and transforming you into this very selfish and ungrateful young man,” Chisom wrote in a letter to himself. “I destroyed your whole life. Mother understood. She tried her best to defeat me from you, but I was too powerful.”

Those words, part of a longer piece titled I Apologize [Letter to Myself], hang at Cal Poly’s Robert E. Kennedy Library next to Chisom’s pencil drawing The Man in the Mirror—a young man in a white tank top with a crucifix necklace contemplating his reflection. Chisom’s art, along with the work of other incarcerated artists from the California Men’s Colony (CMC) in San Luis Obispo, is part of the Between the Bars exhibit currently on display.

Cal Poly sociology professor Unique Shaw-Smith worked with senior project students and artists from the CMC to bring the exhibit to fruition. Just like any other art show, these artists were required to submit an application and selected works for consideration.

“We wanted to give them a sense of mastery,” Shaw-Smith said. “They don’t usually have any ownership in what they do.” 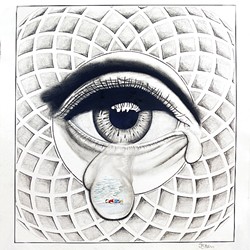 The pieces in Between the Bars run the gamut of self-portraits, serene landscapes, models of cars, satirical political pieces, and more. One drawing, Alan Kurdi, by Steve Starr, features an eye with a tear falling out of it. In that tear is a drawing of dead Syrian child Alan Kurdi, whom the artist read about. The 3-year-old and his family were trying to escape the civil war in Syria by raft.

“This image from the newspaper truly broke my heart,” Starr wrote in a short piece accompanying the drawing. “Five thousand people died this year alone, making the same voyage as Alan Kurdi did, most of them children.”

Knowing that art supplies in prisons are often limited or close to non-existent makes these works of art all the more impressive. Shaw-Smith said the idea was for the art to change the perspectives of the artists and viewers alike. While Cal Poly once got much of its furniture made by CMC inmates, Shaw-Smith said many people are unaware of this connection and don’t stop to think about the men imprisoned there outside of the events that led to their incarceration.

“The dialogue about who prisoners are doesn’t happen enough,” Shaw-Smith said. “We don’t think of a prisoner as an artist.”

Anonymous quotes from the incarcerated artists popped up next to the art pieces at the library and revealed the transformative nature of the project. “Art has taught me that I am much more than my crime,” one quote read. “It has allowed me to look deep inside my soul and realize that I still have ‘good’ inside of me that manifests itself in my artwork.”

Patrick Moloney, senior librarian at the CMC, worked with Shaw-Smith to bring about the exhibit. He said this show, with art from inmates being displayed in the community, is the first of its kind for the CMC. Moloney said the feedback on the exhibit has had a tremendous effect on the artists.

“That’s just re-instated that they have self-worth, and they need to focus on that,” Moloney said.

Shaw-Smith said she hopes the exhibit, which could be displayed at Cuesta College after its run at Cal Poly ends, will make viewers rethink preconceived notions they may have about prison and the people who end up there.

“I hope they just challenge themselves to think beyond what they think they know,” Shaw-Smith said. “Because they don’t have that direct relationship with incarceration, they don’t really get it.”

Send stories of shared humanity to Ryah Cooley at rcooley@newtimesslo.com.