It's Thursday, Feb. 28, and Krista Rooney is setting up her equipment for her 3:15 p.m. class. She is the owner of From the Roots Up Healing Services and teaches kickboxing, but the class is more than just learning how to kick and punch. She teaches this form of martial arts with a purpose that's individualized to each girl or woman that takes her class. 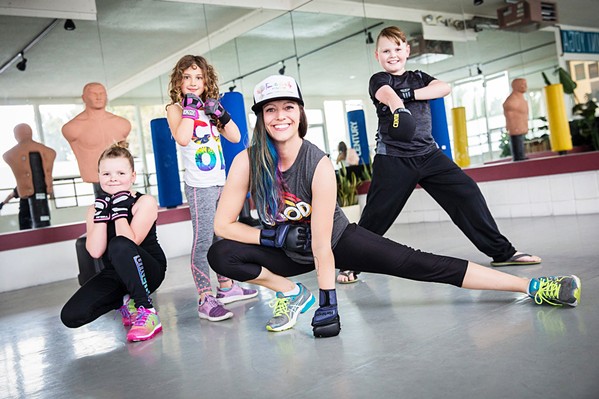 As Rooney lays out multiple pairs of kickboxing hand-wrap gloves for her students to grab, she said she would describe her classes as half lesson and half learning about kickboxing.

She starts her class with meditation and mind exercises. It's a way for her students to create a space where they feel comfortable, centered, and focused.

It's really a chance for the individual to understand what their purpose in attending the class is, because no two people are alike, and their intentions are different as well.

It's exciting, she said, to get people to understand the power of their mind one minute and to put that inner power to action with the kickboxing lesson of the day.

Rooney isn't here to train girls and women in combat; while they are getting good exercise and learning self-defense, it's about learning to be confident. She gives her students the tools and empowerment to be strong physically and mentally.

This was a concept that Rooney didn't get to explore until she went to college at the University of Alaska Fairbanks. At the time she was going to school, Rooney said sexual assault on women was happening a lot. She said females on campus, including herself, wanted to learn something to feel safe walking around campus.

"We had all this snow gear on because it's so cold, and all that wasn't covered were your eyes so your peripheral vision wasn't too great," she said.

So Rooney and a friend heard about a free kickboxing class that was being offered at the International Karate Association Alaska.

"So we checked it out, and the first time I hit a bag I felt unstoppable. I don't know how else to describe it. It was just so empowering to just have ownership of my own body," she said.

That's what Rooney wants her students to feel. As she brings in the Century BOB, a cream-colored, life-size mannequin used for training, Sophia Mittman comes in and starts to get ready for class.

Sophia shyly told New Times that she has been having a lot of fun with her kickboxing class and has been learning a lot about self-defense. After she walks away, her mom, Julie Mittman, said she has really seen a change in her daughter since she started bringing her to class.

"The thing I noticed about Sophia is that she got so much more confident about herself and her body, just by the way she carries herself," Julie said.

She laughed when she told the story of Sophia defending herself.

"Sophia defended herself from a boy that was bothering her. She had asked him three times to stop but he didn't," Julie said. "The boy was a friend of ours, and the dad said he deserved it."

U.S. Rep. Salud Carbajal (D-Santa Barbara) announced the 2019 winners of the 24th Congressional District Women of the Year Award: Beth Farnsworth, a reporter for KEYT in Santa Barbara who covered the Thomas Fire and subsequent mudslides; Dr. Amy Alzina, the principal and superintendent of the Cold Spring School in Montecito, which lost two students in the Thomas Fire and mudslides; Becky Jorgeson, founder of Hope's Village in SLO; Gloria Soto, a recently elected city councilwoman in Santa Maria; and Deanna Cantrell, SLO city's police chief. The next nomination period for the awards—given to women who "have gone above and beyond to positively impact our community"—is open through March 22. Δ