From trash to treasure!

Satire for the modern age!

Bobby Joe Ebola and the Children MacNuggits began in 1995, in a trash-strewn fast-food parking lot in Pinole, CA.” So begins the bio of guitarist Dan Abbott and singer Corbett Redford, who “rose from humble circumstances as a satiric folk rock band that played for friends to their current majestic heights with hilarious and sometimes frightening acoustic performances.” 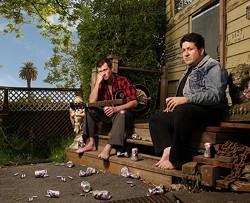 Just how “satiric” are these guys? Here are the lyrics to “Life is Excellent”: Life is excellent/ The tap water tastes like excrement/ The skies rain poison/ But I’ve got to pay the rent// There’s no litter here/ It’s only litter where/ There’s no concrete/ It’s a rule// They’ve got a lot of gall/ To put a shopping mall/ Where we once had/ Everything// I wasn’t expecting it/ But I had to pay the rent/ Got a job/ But don’t want that job// Cheesy orange smell/ Like cones on the road to hell/ Is it poison, is it food/ Will it sell?// I like my glowing box and/ I like my showers hot/ But you can’t take the kill out of/ kilowatt// I know that talk is cheap/ I know that I am weak/ But I’d like to be/ Around next week/ and I don’t think there’s enough plastique.

Watch the video online. At the end, they die in a bloodbath at the hands of children.

“The MacNuggits have gathered loyal legions of fans with their infamous combination of searing social satire, soaring harmonies, outlandish and shocking truths, and poop jokes,” continues their extremely amusing bio. “The songs draw upon a variety of pop culture, of global crises, of interpersonal labyrinths, of nightmares and daydreams, skewering them on a rusty spit for the world to see. With a nod to social satirists like Lenny Bruce and George Carlin, and musical influences ranging from Slick Rick to They Might Be Giants, Bobby Joe Ebola is the vaudeville routine for your personal apocalypse.”

Bobby Joe Ebola & the Children MacNuggits play at 8 p.m. on Friday, March 29, at the Z-Club. “They’re Bay Area folk punk veterans with a twisted sense of humor and wry political lyrics,” said promoter Carver Cordes. “This will be a full band performance and they’ll be joined by The Neets (featuring members of Skykillers) and Readum & Weepers.” This 21-and-older show costs $5 at the door. 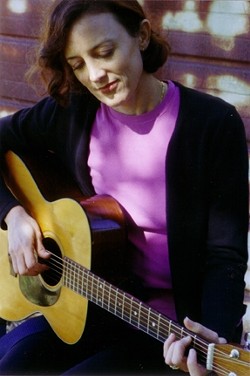 In my estimation, Wendy Liepman of Bob and Wendy is one of our area’s best songwriters, right up there with Jude Johnstone and Jody Mulgrew, which is why she’s being honored on Monday, April 1, with a tribute show at Upper Crust Trattoria in SLO (6:30 p.m.; all ages; pass the hat). The lineup of folks covering her songs includes Jody Mulgrew, Dulcie Taylor, Kristen Black, Craig Nuttycombe, Ted Waterhouse, Randall Lamb, Carol Lowell, Loren Radis, Ynana Rose, Peter Yelda, Holly Ann Phillips, and Steve Key. Bob Liepman will add his cello throughout; he and his wife will close the show.

Bob and Wendy’s album Your Beautiful Life won the New Times Music Awards Album of the Year last year, due in large part to Wendy’s remarkable songs. She was only 10 when she wrote her first song, “Endless Highway,” and she continues to play her mother’s 1944 Martin guitar.

Informed by the music of the ’60s and acts such as The Weavers, Kingston Trio, and later Joni Mitchell, Neil Young, and the Beatles, she names current influences such as Buddy and Julie Miller, Sam Phillips, and Aimee Mann. Visit bobwendy.com for more info.

This should be a real treat watching all these talented locals take on Wendy’s songs. I wish I could be there, but Vegas calls!

What’s in a name?

I never liked the name PK. It seemed meaningless to me, so I was pleasantly surprised when the alt-rock act from SLO Town (which represents our next best hope for a commercially successful home grown act to put SLO on the map) changed its name to Night Riots, which I “get.” 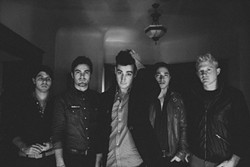 Fronted by Travis Hawley, a truly charismatic singer with a powerful, piercing voice, Night Riots has been given attention by Rolling Stone magazine, has a professional publicist in Big Picture Media, and has nearly 20,000 “likes” on its Facebook page. The group also plays SLO Brew on Saturday, March 30 (doors at 7 p.m.; all ages; $12 presale or $15 at the door).

“So this will be our first hometown show as Night Riots and we want to make it as huge as possible,” said guitarist Matt DePauw. “On Feb. 25 we premiered our brand new single ‘Spiders’ through MTV Buzzworthy, and we have been getting great responses.”

It’s a pretty cool track—dark and brooding, with a hooky chorus and anthem-like quality. They’ve definitely got a commercially viable sound, and the quintet, which also includes guitarist Nick Fotinakes, bassist Mikel Van Kranenburg, and drummer Rico Rodriguez—seems to have the desire to take their music to the next level.

Get out there and support these hometown heroes. New Beat Fund and The Vacant Shapes will open the show.

SLO Brew has four other shows you should know about this week, starting on Thursday, March 28, with Who’s Bad, a Michael Jackson tribute band (doors at 7:30 p.m.; all ages; $15 presale or $18 at the door). Fronted by Michael Jackson impersonator Joseph “JoBel” Bell, Who’s Bad features the synchronized dance moves, the sights, and the sounds from Jackson’s expansive catalog of hits.

On Friday, March 29, Hot Buttered Rum returns (doors at 7:30 p.m.; 21-and-older; $13 presale or $15 at the door) with Cuesta Ridge opening. This should be a great night of Americana music by two groups of talented performers.

Hip-hop fans prepare for Ghostface Killah with Adrian Younges on Sunday, March 31 (doors at 8 p.m.; all ages; $24 presale or $26 at the door). Ghostface appeared on Kanye West’s Cruel Summer and his music was in RZA’s film The Man with the Iron Fists.

Finally, on Tuesday, April 2, check out Heartless Bastards (doors at 8 p.m.; all ages; $18 presale or $20 at the door) with Jonny Fritz opening. The Bastards hail from Austin, and their creative approach to rock reminds me of The Smoking Popes. Go online and check out their video for “Only for You.” The band was on the road for a better part of last year, and vocalist Erika Wennerstrom sounds in fine form. Opener Jonny Fritz is a Nashville singer-songwriter who’s opened for one of my new favorite bands, The Alabama Shakes, which makes him OK in my book.

Martin Purtill and Lee Madeloni, childhood friends from Davis, share the spotlight at the SLO Down Pub on Thursday, March 28 (6:30 p.m.; all ages; pass the hat). According to concert co-producer Bonnie Nelson, “They formed their first band together in ’99. Martin (say mar-TEEN) hit the road as a solo balladeer in ’06. Lee is the son of guitarist Earl Slick (David Bowie, John Lennon) and bassist-singer Jean Millington (Fanny). He moved to L.A. and formed the band Everything on Fire.”

Get your dose of reggae when Irie Sun plays Frog and Peach on Friday, March 29. The Fresno-based roots reggae act formed in 2010 and delivers a socially conscious message packaged in Latin-tinged reggae.

If you find yourself in Big Sur over Easter weekend, head to the Coast Gallery Café on Friday or Saturday, March 29 and 30, to catch Wally Barnick playing from 4 p.m. to sunset. He’s mainly a singer “who 40 some years ago took up playing bass guitar in order to ensure a place in the band.” In fact, he’s been a member of the Cache Valley Drifters since 1975. With his acoustic guitar and a deep catalog of familiar tunes, Wally will deliver an excellent selection of music.

From smooth jazz to blistering blues, classic rock, swing, and soul dance favorites, the man to see is Richie Begin, who “has a voice that can croon an Al Green soul ballad, caress a jazz standard, and belt out a barroom blues shouter with equal ease,” according to press materials. The one-man band plays piano, bass, and guitar, but is most at home behind his set of vintage Ludwig drums or with his 1951 Gibson J150 acoustic. See him on Saturday, March 30, from 2 to 4:30 p.m. in D’Anbino’s Tasting Room for free, and taste some wine for only $5! Later that same day, see blues act Code Blues at 8 p.m., as they perform in a variety of blues styles ($10 admission; call 227-6800 for reservations).

Kristen Black is back to her double life. During the day, she’s a mild-mannered Cal Poly organic chemistry professor, but on Sunday, March 31, Black will assume her secret music goddess identity when she plays Sculpterra (1 p.m.; all ages; pass the hat). “I was always making up stupid little songs and skits and performing them for anyone who would stand still for 60 seconds and pretend to listen,” Black said of her L.A. upbringing. She credited her older brothers for her love of music, everything from Big Band, classical, punk, and the Beatles to heavy metal, mainstream rock, and the blues. For this show, she’ll play with local mandolin player Mark Travis and bassist Greg Steers. Other musical guests include Dorian Michael, Peter Yelda, and Nashville’s Melody Guy.

Canadian guitarist Jesse Cook, one of the most influential figures in “nouveau flamenco” music, plays Wednesday, April 3, at 7:30 p.m. in the Alex and Faye Spanos Theatre on the Cal Poly campus. Expect “fiery, passionate, percussive guitar work and a smoldering onstage charisma [that] will blend with a mix of nouveau flamenco, rumba, and world rhythms,” according to press materials. Student and adult tickets are $38 and $47 (756-4849 or online at pacslo.org).

Paso Robles duo Shaufrau is apparently huge in L.A.! I keep getting notices from them about their gigs at The Viper Room, the Whisky A Go Go, The Roxy Theatre, House of Blues, The Key Club, and AMPLYFi. They also just got back from playing SXSW. This Wednesday, April 3, they’ll play the Sanitarium. He rocks the acoustic guitar; she sings, often clad in lingerie. What’s not to like?