From vine to wine: Local wineries shift their harvest from handpicked to machine

Darkened by the evening sky, rows of grapevines are lit up by large light towers. They provide just the right amount of light for men and women to pick the fruit that's been growing for about eight months.

The tail end of harvest season for vineyards was just a couple of months ago. August through October are crucial for picking the grapes that will be blended, fermented, and ultimately corked into 750 ml bottles. 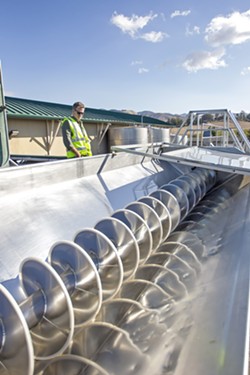 This year's harvest was a little bit different than previous ones, with some vineyards choosing a different path for picking grapes. Machines are taking the place of some laborers. And although it's not a drastic change, yet, it's a method popping up at vineyards throughout San Luis Obispo County.

That's the case for Scott Williams, the wine manager for Niven Family Wine Estates, a company that grows and produces wines for the Baileyana, Tangent, Trenza, Cadre, and Zocker labels.

"Those five brands are the brands you see out there on the shelves or in our tasting rooms," Williams said.

Choosing how to pick the fruit during harvest isn't a simple task for Williams. He uses both handpicked and machine harvesting methods to create his end product. But that decision was dictated by the design of the vineyards he runs and the changes that were made to it in order to accommodate for a machine harvester.

The choice for vineyard managers comes down to the design of their vineyard, the type of grape variety being picked, cost, and the labor that's available. While winemakers like Niven Family are splitting the difference between machine and man as sort of an insurance policy against labor shortages, others are sticking to traditional harvesting methods because of the end product that it creates.

Niven Family wines are produced at Orcutt Road Cellars, but the most important part of the winemaking process is in the care and growth of the grapes at Paragon Vineyards in the green hills of Edna Valley.

Williams has been managing Paragon for more than a decade, and he's noticed the changes that have taken place in that time—both in the harvesting process he manages and in the wine country that surrounds him.

"I would say 80 to 85 percent of the grapes that come into this winery for our estate brands are handpicked. About 15 to 20 percent are machine picked, but there's a lot to that," he said.

Paragon Vineyards was planted in 1973, and the vines were planted with enough room for a person and a bin to work in.

"There was not as much foresight for mechanization at the time when vineyards were developed and planted," he said.

One obstacle for a machine is the trellis system, the hardware that holds up the vines.

"You can't even get a machine in because of the way that it's set up, or the vines are so old that if you use a machine, it's kind of more sensitive," Williams said. "It's like an older person's bones."

But that's changing for a lot of vineyards. Williams said the vines that were planted in the vineyard years ago eventually become unproductive and no longer economically viable. When the vine no longer produces grapes, it is removed and replaced with a new one. And when the new vines are planted, wine managers have the option to put them in the ground with enough space for a machine to get between the vines and pick the fruit.

"We like to have that option moving forward, to be able to machine pick if that's something we wanted to get into," he said.

A majority of the fruit that Paragon grows is chardonnay and pinot noir, although in terms of acreage, there is more chardonnay in the ground. Pinot noir grapes have a thin skin and need more of a gentle handling, so Williams said they bring in crews to handpick them. Chardonnay grapes have a thicker skin, so a machine can pick them from the vines.

"The machine drives over the vines, straddling the vine and uses plastic bars to whip the fruit off the vine," he said. "It has to be done in a way that it takes the fruit off but it doesn't hurt the vine."

Williams said that since the early 2000s, Niven Family Wine Estates has rented machines for harvesting depending on the harvest season. It wasn't until a few years ago that Niven purchased its own machine.

Although the vineyard uses both laborers and a machine harvester, a machine is cheaper to use.

"One of the reasons wine is so expensive is the process. The more labor inputs into the product, it's going to be an expensive bottle," Williams said.

In the end, what the resulting product will taste like is the biggest factor a wine manager takes into consideration when deciding the harvesting method that will work best. Williams said handpicking creates a certain taste for some grape varieties. He argues that to some degree certain types that are picked via machine have a similar taste when they're handpicked.

For Williams, he and his team have found that if a machine picks their chardonnay it results in the same taste as it would if it were handpicked. If needed, Williams said he would focus machine-work on the chardonnay and save the manpower for the more delicate pinot noir.

Niner Wine Estates prides itself on handpicking their grapes.

The vineyard was purchased in 2011 with 46 acres of vines. In 2012, Niner Wine Estates planted an additional 31 acres. The ranch produces pinot noir and chardonnay.

"There is less chance of leaves and other material getting into the bins, and fruit integrity is maintained," she said.

Handpicking the fruit also allows Bohlman and her team to whole-cluster press the white grapes. Whole-cluster pressing is a gentle process that reduces mechanical action on the grapes and utilizes stems as a natural filter, yielding clearer and cleaner juice. For red grapes, handpicking allows for whole-cluster fermentation, which is the process of keeping the grapes intact, hooked together, and connected to the stems when picked from the vine.

If the grapes were machine-harvested, these processes wouldn't be possible, because when fruit is picked with a machine, it detaches the grapes from the stem as they get picked.

"Starting out with undamaged fruit is a huge benefit right from the start. It allows me to do high-end winemaking techniques," she said.

The Jespersen Ranch, similar to the other vineyards, doesn't lend itself to machine work anyway, because the acreage that the vineyard lies on is too steep. Plus the winery that produces the wine just wasn't built for it.

"Our winery is not designed to receive machine-harvested fruit so we'd have to make some capital investments in order to retrofit our receiving line," Bohlman said.

Although Bolhman and her crew haven't used and aren't currently using machines, the option isn't totally off the table. It's something to consider when it comes to the labor shortage. 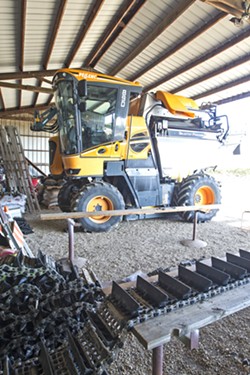 "Labor is a huge issue and is getting more problematic each year. We are fortunate that we work year-round with a labor contractor that provides us with consistent employees who know our vineyard," Bohlman said.

This past harvest season endured record heat, which caused most wineries to harvest at a faster pace than usual. The unexpected heat makes the fruit mature faster, but it can only be picked at night. It's a safety hazard for crews to pick during the day, and a machine can't pick during the day because the fruit tends to be juicier and it doesn't come off the vine as cleanly.

"This year was more difficult because we needed to harvest more fruit each day due to the hot weather, but luckily our contractor was able to find additional workers when we needed them," she said.

"One of the biggest reasons we got the machine is because of the inevitable writing on the wall that labor is harder to get," Williams said. "We still are fortunate enough that we have been able to get labor as needed to pick our fruit, but the machine is kind of a two-fold. It's insurance."

Out in the fields

People who work in the fields during the harvest season have one characteristic in common: They return for work every year. Individuals who have worked season after season for Pacific Vineyard Company have been doing so for more than 30 years. It's a generational pattern that Violet Silva has seen in her eight years of working in the industry.

Silva is the safety coordinator for Pacific Vineyard Company, a business that assists vineyards with everything from the beginning stages of creating a vineyard to the day-to-day operations of production. The company manages 1,525 acres of vineyards in Edna Valley and about 250 acres in other areas—Pismo Beach, Avila Beach, and Santa Ynez. The company assists vineyards with pre-plant investigation, vineyard development, management of vineyard operations, and arrangement for future wine production.

A huge part of helping with these operations is recruiting workers for full-time and seasonal positions.

"It's really an amazing thing to see these people come in and pick the fruit and toss it into the bins. Because we couldn't do this without them," Silva said.

There are two kinds of workers Pacific Vineyard Company employs, seasonal and full-time. Seasonal workers come out for the three seasons of wine production—pruning, canopy management, and harvest. Pruning takes place in January and February and involves trimming vines to optimize their fruit production potential. Canopy management is in late March to early April and involves maintaining the trellis or training system for the vines as well as the trimming, positioning, and stripping off of unwanted leaves and vines. These techniques help manage the exposure of the vine's leaves and fruit to the sun. Harvest season is from August to October. Seasonal workers come back each time to fulfill what the duties are for that season.

"We are very fortunate to have a core group of people come and work for us every year, so that has helped us," Silva said.

She said that often, individuals who come for the seasonal positions tend to bring other applicants with them.

"There's a lot of family members that work together. You get one new family member, you can almost count on them bringing someone with them," she said.

Full-time workers are usually tasked with tractor work, cultivation, pesticide application, and floor management. The job description typically includes anything it takes to care for the actual property. The seasonal employees work with the plants.

"If there is someone who is interested in full-time or has shown some kind of skill set that we think would work well with the job that's needed, we seek them first," she said.

Over the many years she's worked with the company, Silva said Pacific Vineyard hasn't seen a decline in applicants for its seasonal work. But Silva said she has to take into consideration that many vineyards are starting to machine pick.

"We may not be feeling that so much, because our work is starting to go in a different way," she said. "If we don't have the same number of applicants or the same flow of people coming in it's because we're following the demand." Δ