Frozen II is a worthy sequel

Co-directors Chris Buck and Jennifer Lee (Frozen, 2013) return to helm this animated sequel about Anna (Kristen Bell), Elsa (Idena Menzel), Kristoff (Jonathan Groff), Olaf (Josh Gad), and Sven the reindeer as they leave Arendelle and travel to an enchanted forest, where they hope to discover the origins of Elsa's power. (103 min.)

Glen Wow, I thought that was great! It's a story about how sometimes change is good even though it's scary. It's also about friendship but how sometimes you have to do things on your own to protect your friends from danger. What did you think it was about?

Rohn Seems like it was kind of adventure based. It's also about love.

Rohn No, not too much. I like that there were the four elements [that protected the forest], but also that there was a fifth. Earth, fire, air, and water—all natural elements because you need all those to make things. I felt like it was kind of strange that earth was bad. It was also kind of strange that fire was represented as a lizard. They did a cartoon lizard but it was definitely supposed to be a salamander. 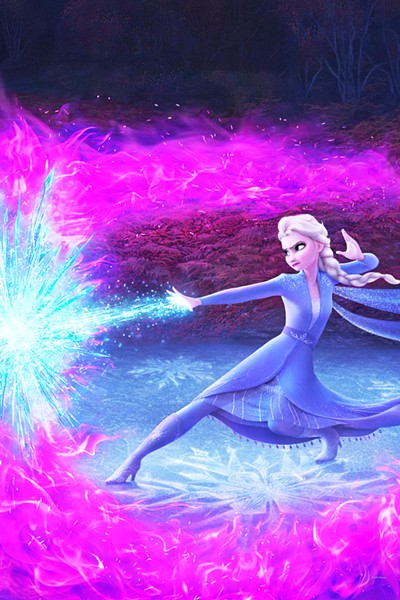 Glen That little salamander was super cute. Do you think they'll make toys out of it?

Rohn Yeah, they'll make Lovies, like stuffed animals. I think they did a real good job on the animation.

Glen The part that really blew me away was when Elsa was trying to get across the ocean and there were all those huge waves and the underwater scenes where she was getting swept under, and then that magical watery horse appeared. At first she thought it was against her, but then she realized it was trying to help her, and she started riding it. That was amazing.

Rohn I totally agree. It felt like being in somebody's imagination, not a real world, just because of how it looked. I liked Elsa's hair when she just let it flow. Another part that I liked was when they were going into the north and they passed by her ice castle. That was really cool.

Glen Did you think the story was too complicated? When it begins, we're in the past and young Elsa and Anna's dad is telling them about how he became king and spoke about the enchanted forest to the north, and then it jumped to the present. Then when they go on their adventure, it jumps back and forth into the past and back to the present.

Rohn No, it wasn't too complicated. They do that in the first one, too. It might have been confusing if you hadn't watched the first one. I think if someone hadn't seen the first one, they'd still like it but they wouldn't like it as much.

Glen Let's talk about the music. Was it as good as the first one?

Rohn I liked the songs from the first one and this one, especially the song about how you just have to do the next right thing.

Glen That's a pretty good message, right? If you don't know what to do or how to proceed, you just need to take it one step at a time and make each step the best one in that moment, so even if you don't know how it's going to end up, making one small right decision at a time is enough.

Rohn All the songs were just catchy. I would watch this again with my family.

Glen How jealous will your little sister, Acacia, be that you got to see it before her?

Rohn Oh, she was jealous, but dad said, "You should support Rohn instead of being jealous."

Glen What's your favorite character? I like Anna and Olaf.

Rohn My favorite characters are Elsa and Olaf. Olaf is super funny. Elsa can control ice, so ... . Did I already say it was amazing, because it was. It was just amazing. Maybe people in high school might get bored because it's not intense enough. There were some intense moments but it wasn't scary.

Glen It's probably good it wasn't too scary, that way your little sister can watch it, but the scenes where Elsa is fighting through the waves and when the rock giants were throwing stones were both intense. Are you going to ask your parents to get a copy when it comes out so you can watch it at home?