An example of a classic Suggs’ piece is a black and white photograph of a gorgeous, gushing natural hot spring, with a large, multi-colored circle placed smack-dab in the middle. It’s glaring. It’s certainly not the peaceful portrayal of nature that will lull you into a state of tranquility, but that’s the idea.

“Ideally I want people to take away a respect for the wild places [from my work],” said Suggs, whose exhibit Arguing the Landscape is on display at Cuesta College’s Harold J. Miossi Gallery through Sept. 16. “What I’m trying to do in various places is celebrate the wild place and militate against taking them for granted.”

Suggs, who works with painting, drawing, and photography, never planned on being an artist. But as a film student at UCLA long ago, he decided to take a drawing class for fun, with the now deceased artist Charles Garabedian. The rest is history.

“I committed to being an artist because I encountered my mentor,” Suggs said. “The model of toughness, sweetness, intellect, magic that his work and he personally projected inspired me.”

Nature is a constant theme in Suggs’ work, whether it’s obvious or not. 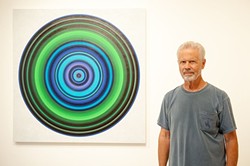 A series of abstract paintings in bold reds, blues, greens, and earthy browns features a series of winding, curving lines at first glance, but they’re actually cropped parts of images, inspired from photographs of Arizona landscapes.

Similarly with Suggs’ photographic work, nothing is as it seems, at first. What looks like one photograph of a group of people enjoying the iconic landmarks like Yosemite, Yellowstone, or the Sierra Nevada is actually several photographs taken over a few hours.

“They had the same experience of nature, in their own ways,” Suggs said. “It’s also about the curious passage of time. The place stays as it is, but the people change.”

“The circle is an autonomous, primary geometry,” Suggs said. “It has resonance in terms of the history of art and the history of cosmology. There are many mystical diagrams that are circular. The circle lends itself to a kind of sublime association.”

While Suggs is aware that his circles have a certain hypnotic quality—you just can’t look away—a friend of his decided that you can in fact hear the circles as well.

“I am told it has a sound,” he said. “Someone I’ve known for a long time came up to me at a show and said, ‘You know these paintings have a sound; they hum.’”

Ryah Cooley is headed off to the woods at rcooley@newtimesslo.com.